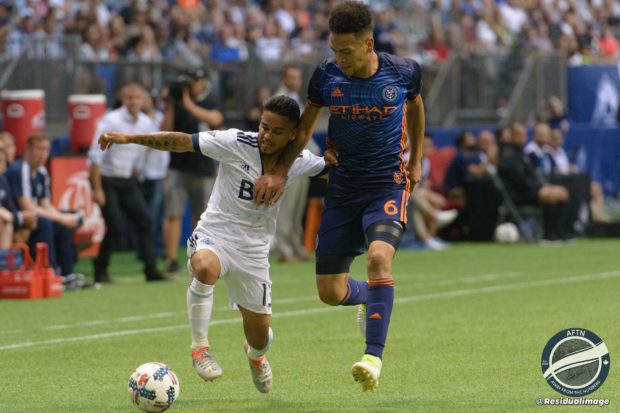 The Whitecaps are back in the win column after another brief swoon, and if the promotion for – and performance in – last weekend’s match against Minnesota is any indication, the rest of this season will officially be the Alphonso Davies Show. The 17-year-old’s transfer agreement with Bayern Munich has owned the headlines for over a week, and with all eyes on him Davies delivered possibly his finest performance to date against the Loons, notching two quality goals and a couple assists to boot.

Unfortunately, while this is all undeniably exciting, it doesn’t mean the Whitecaps are guaranteed to get a winning streak going. The last time Davies-mania ran rampant – after a one goal, three assist performance against Orlando – the ‘Caps followed up that match with a 4-0 drubbing in Philadelphia. And this weekend’s test won’t be easy, as the ‘Caps head to Yankee Stadium to take on New York City FC, owners of the league’s best home record (10-0-1), and with a Canadian Championship final first leg looming, and some injuries and suspension, it looks like they’re heading to the Big Apple with an understrength squad.

Though the defence was still far from perfect against Minnesota – two inexplicable late goals caused some tension in a game that should have been over – for the first time in what feels like forever the Whitecaps have used the same backline for three straight matches: Stefan Marinović in goal, and Kendall Waston, Doneil Henry, Marcel de Jong and Jake Nerwinski as the back four.

With Waston suspended there has to be at least one change in the defence against NYCFC, and as much as that group appears to be the one the ‘Caps will be counting on to anchor the team in their push for the playoffs, next Wednesday’s match takes priority and I would expect possibly a completely changed backline for this one.

That should see Sean Franklin and Brett Levis coming in as the full-backs, with Jose Aja marshalling the middle of the defence with Aaron Maund, although leaving Doneil Henry in to have some consistency may be the route Carl Robinson goes with.

Behind them, Stefan Marinovic has been busy since returning from injury, so resting him ahead of the games against Toronto and Portland would seem sensible, so Brian Rowe could be back between the sticks for this weekend.

In the midfield, Robinson’s options will be somewhat limited on Saturday, as Efraín Juárez’s suspension has been extended for an additional two games, and Jordon Mutch appears to be injured once again. That leaves the ‘Caps with three likely options against NYCFC: Felipe, Russell Teibert, and Aly Ghazal.

It was Teibert and Ghazal who started against Minnesota, but the Egyptian was forced off just before halftime due to injury, and he was replaced by Felipe. There has been no further update on Ghazal’s condition, so if he’s available it will be interesting to see who Robinson chooses to sit this weekend.

Personally, I hope Teibert gets another start, as he has played very well when given the chance this season, and the team has done much better with him on the field: when he has started this year the Whitecaps are 5-1-2 in MLS play, with an average of 2.1 goals for per game and 1.5 goals against. When he hasn’t, the ‘Caps are 3-8-3, with an average of 1.2 goals for and 2.3 against.

Up front, the trio of Davies, Yordy Reyna and Kei Kamara have been electric at times in recent weeks. Reyna put in a fantastic performance against Minnesota, with a wonderful solo goal as well as two assists, and the three of them have combined for seven goals and five assists in the ‘Caps last four matches.

Again with the Canadian Championship final looming, it would be no surprise to see all three start on the bench for this one, allowing Brek Shea, Nicolas Mezquida, and Anthony Blondell to try and keep the game close, before the Whitecaps bring on their big guns.

The fourth forward spot, however, has been a bit of a black hole recently in terms of offensive production. Cristian Techera had his blistering goal-scoring run at the end of May, but he hasn’t recorded a goal or an assist since. Brek Shea hasn’t scored since April, and Bernie Ibini hasn’t even seen the field since May. Mutch, normally a centre-mid, played on the wing for a few games, and scored against Chicago, but as mentioned earlier, he’s unavailable for Saturday.

If one of the players mentioned above could find their form and link up with the Davies-Reyna-Kamara attacking force, then the ‘Caps could very well have enough firepower to push them through the stretch run and above the red line.

Looking out east, life is good for the men at Yankee Stadium. They have the second-best record in MLS, and before a disappointing 3-1 loss to Seattle they’d won four straight games, pitching a shutout in all four. Luckily for the ‘Caps, they will be without David Villa, who is recovering from a knee injury. He pulled out from participating at the MLS all-star game on Wednesday, so due to one of MLS’s many odd rules, that means he is automatically ineligible for NYCFC’s next match.

Without the Spanish forward, Maximiliano Moralez is the man to watch. The diminutive Argentine midfielder has eight goals (ties team-lead) and eleven assists (team-lead) this season, and has recorded at least one goal or assist in seven of his last nine matches. NYCFC as a whole are tied for third in the league in goals scored, so the ‘Caps defence (tied for third-worst in goals conceded) has their work cut out for them at full strength, never mind with a makeshift backline.

After a stretch of games against mostly lower-tier opposition, the Whitecaps now face a stretch of three games against teams in the upper echelon of the league (NYCFC, Portland, NYRB), with the Canadian Championship Final against Toronto sandwiched in between. A bad two weeks could sink their season, while a good two weeks could launch them back into fifth or sixth place in the Western Conference. Either way, we should have a much clearer idea of the ‘Caps’ playoff chances by the end of August.