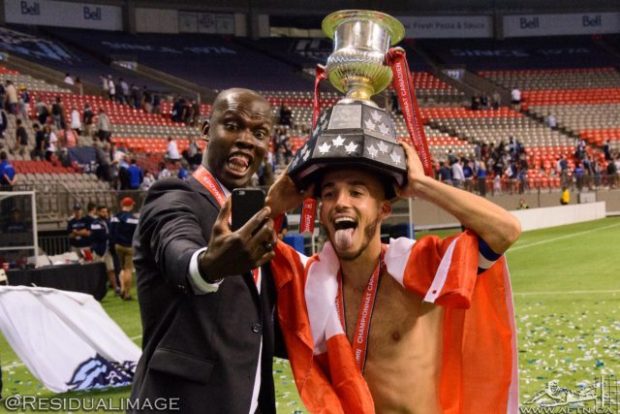 Believe it or not, the Whitecaps are more than likely not going to be winning either the Supporters’ Shield or the MLS Cup. And that’s despite this incredible eight match unbeaten run! Crazy, I know.

There is one real shot at a trophy though, and that’s the Canadian Championship. Marc Dos Santos has talked up how much the club wants to win this cup, and that’s great to hear because it’s something they should be prioritizing! Not only is it the only way that the ‘Caps can qualify for the CONCACAF Champions League, but it’s a path to winning something meaningful!

Our fanbase has been starved for any type of success in recent years, so it would feel so great to see the club lift a trophy. And given how the introduction of the CPL has made the Canadian Championship truly feel like a proper tournament, being able to stick it to all the other teams in the country would feel good too.

Of course, the path won’t be easy, even if on paper the ‘Caps should have one of the two strongest sides in the tournament (the other being Montreal, given how poor Toronto has been this year). Single-elimination knockout lends itself to upsets, the ‘Caps are on the road for this match and Pacific currently sit in first place in the CPL standings. None of that will make it easy.

The ‘Caps can’t expect to roll out a B-team Thursday night and expect to make it through, if they do that it’s decent odds they get run off the field, similar to how they were against Cavalry FC back in 2019. Dos Santos has said they’re taking this competition very seriously, so we’ll see if that holds with how they line up.

With a crucial MLS match against Real Salt Lake just three days later, how much rotation is there in the squad? Do we see players like Cristian Dájome and Janio Bikel, or players like Tosaint Ricketts and Patrick Metcalfe? If Cristián Gutiérrez is fit, does he start here or is he held off until the weekend? How much does Ryan Gauld play, if at all?

All of these questions really make it impossible to try and guess how exactly the ‘Caps will line up to take on Pacific. I assume they will stick with the 4-3-3 formation that has led to their recent improved play, but outside of that it’s plausible that just about any player in the squad could see the field whether as a starter or off the bench.

Looking at the hosts, Pacific FC are coming off a 2-1 home loss to Calgary, their first defeat in just over a month. They hold a record of 7-3-4, already with nearly as many wins as they had in all of 2019. Pa-Modou Kah has done a great job since taking over as head coach and Pacific have plenty of offensive firepower, leading the league by a decent margin with 22 goals on the year.

The standout player for the island side this season has been former ‘Cap Marco Bustos, who with 5 goals and 5 assists has been the engine for the team and will be in the forefront of CPL MVP talks if he keeps playing like he has been for the rest of this season.

The Pacific roster as a whole is littered with former ‘Caps (mostly residency) players and some strong ties to the club. There’s Matthew Baldisimo, the older brother of ‘Caps midfielder Michael. There’s of course Kah, who lifted the Canadian Championship while on a hoverboard the first and last time the ‘Caps won it. All but five Pacific players are Canadian, plenty from BC, and many of them would surely love to stick it to the MLS club in town.

If I was able to pick any lineup I wanted for this match, I would have it be as close to the first team as possible. That means Dájome and Caicedo up front, Crépeau, Veselinović, and Rose at the back, Gutiérrez and Gauld both starting if they’re fit enough to.

With where the Whitecaps sit in the standings, obviously they’ll be looking to make a push for the playoffs. But as things stand, the number one priority should be winning this trophy. It’s something that should be legitimately winnable if they put their full focus on it, and it would be a great way to ring in their proper return to Vancouver over the next couple months. Let’s see if they can complete the first step in that journey.