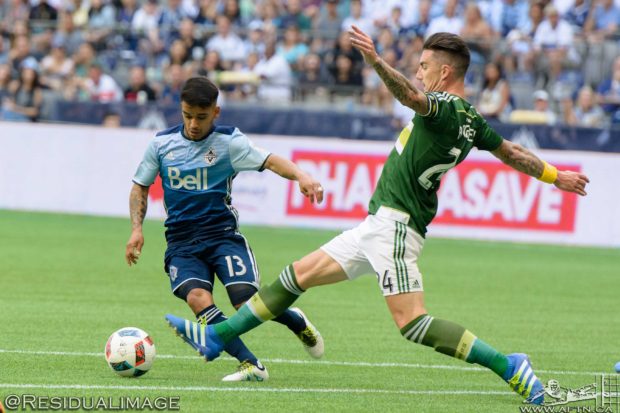 Up, down, throw up, repeat. Much like the big wooden roller coaster at Playland, the Whitecaps season is trundling on despite it’s squeaky start. A Cascadian derby in Portland is the next bump in the road for the ‘Caps as they look to string two wins together for the first time this season.

Portland sit atop the Western Conference, with a strong 4 wins, 1 draw and 2 losses on the season. They also boast the best goal difference in the League, with +7. Attacking midfielder Diego Valeri has been red hot out of the traps in 2017, he has five goals and three assists, more than some Whitecaps forward players contribute over the course of a season. But Whitecaps’ nemesis Fanendo Adi will miss the game due to suspension, after DisCo retroactively suspended him for a violent elbow to a defender in their previous game, a 1-0 home loss to Sporting Kansas City.

The Whitecaps, fresh off their 2-1 win against the Sounders, will likely revert to their regular away strategy to avoid coming back up the I-5 empty handed. Fredy Montero came to the forefront when it mattered, but will be asked to fulfill a very different role in Portland. He’s a player that will also likely thrive on the hostile attention he’ll get from the Piggy Park crowd.

The Whitecaps should line up in their regular 4-2-3-1 this weekend, but will probably sit deep and attack on the counter. With the pace of Kekuta Manneh shipped off to Columbus, Carl Robinson will look to Alphonso Davies to be his explosive player. Montero will be limited to work with whatever Davies can create; a heavy burden for a 16-year-old, but one that he has the ability to carry out. Cristian Techera, who I would suggest start on the other wing, is our most defensively responsible winger and will have to pick his chances to get forward due to the strength that the Portland Timbers pack in their midfield.

Christian Bolanos could start in the number ten role again. He is a good fit for that position as he is capable of both holding onto the ball when it matters and picking out a killer pass. Many prefer to see him in his more natural position on the wing, but until Yordy Reyna is back, Bolanos is our best bet in that position.

The defensive midfield duo will be even more crucial than usual; Portland love to dominate the centre of the park, so whoever is picked in there will need to be strong and relentless: if Tony Tchani is fit he must start, with Matias Laba beside him. With Jordan Harvey struggling for form this season, I would also like to see a backline of Sheanon Williams, Tim Parker, Kendall Waston, and Christian Dean. Defensively, the Whitecaps have looked a lot better, but will be put to the test against this free scoring Timbers side, albeit held scoreless in their home stadium by Kansas City in the last match week.

With Adi suspended, we could see our old friend Darren Mattocks starting for Portland. We are all too aware of the threats that Mattocks poses, and also the threats that he does not pose, but with this Timbers side, it’s not the striker you have to worry about, but those behind him in the shape of Valeri and Darlington Nagbe.

The fact that both teams may lineup in a 4-2-3-1 means that we could see them cancel each other out, therefore I am going with a bore 0-0 draw. At this point, an away point is all I can dare to hope for on this endless roller coaster of fandom.

Will Portland be overrun by a boy who will still be a teenager in three years?

Can Montero get involved enough to make a difference?

Can the defensive midfielders contain Valerie?