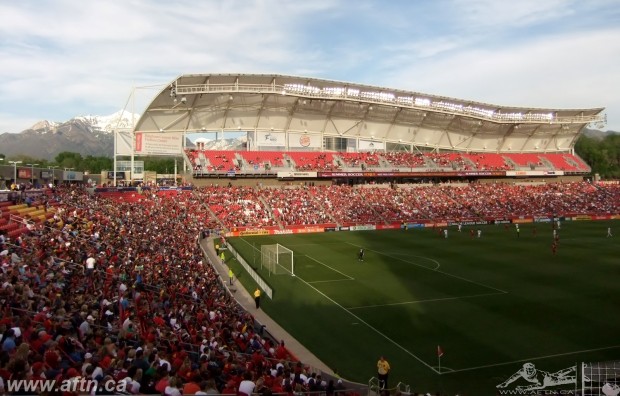 It’s always good to get back on the horse again after a fall. Vancouver Whitecaps fell pretty hard last week in DC. We can only hope they haven’t been broken humpty dumpty style as they head down to Utah for an even tougher test against an in-form, and unbeaten, Real Salt Lake side.

The Whitecaps didn’t have a great game in DC. Understatement of the season so far there. They looked lifeless (except for David Ousted). Maybe it was the travel? Maybe it was the because there were so many changes and people coming into the team all at once?

Whatever it was, they had no ideas going forward. At the beginning of the regular season I was thinking our depth was fine, but that is more my projections from last year then the reality of what was on the field during that game (which was tied with our worst defeat since coming into the league). Perhaps they will want to show they are not pushovers and fight really hard against RSL. MLS is a crazy league so anything could happen.

RSL have been quietly good this year. They are not the possession team that they used to be, with a diamond midfield that owned much of the MLS during the late 2000’s, but they are experiencing a bit of renaissance this year. At this point in the season they stand second in the always tight Western Conference. They were never to be trifled with before, and this season it seems the same. Anecdotally the Whitecaps have always seemed to do better when the opposition is better, so perhaps we will play to their level.

The game in DC was something to forget. That 4-4-2 with Masato Kudo and Blas Perez up top was not what I hoped it could have been. Instead Kudo disappeared, the midfield was lacking all creativity, and the defenders were slacking so badly that they were barely recognisable.

The only man I can say positive things about during that game is Ousted . This has been said before, but when your goalie gave up four goals and is still your best player, there is something very wrong. He gives it his all every game. He should be our captain for the rest of the season simply based on how much he gave, in what could have been seen as a ‘hopeless performance’. If fighting on in the face of overwhelming odds is not leadership, I don’t know what is.

That backline was in shambles. However let us look at what options we have.

We could have Pa Modou Kah come back into the central defender position. However I don’t think most of the blame for the poor performance can be laid at the feet of Kendall Waston. He won two headers and had five tackles. It was more the team losing balls in poor positions, as well as not snuffing out DC United’s good wing play. Could we see Kah step in for a struggling Tim Parker? Maybe, but I don’t think it would do him any good to his confidence to see that happen. I look to see the same pair start again against RSL.

Oh boy… the outside backs had a tough time in Washington, but then again, DC United went in hard on both of them. That is shown by Fraser Aird having to make six tackles, and Jordan Harvey having to make five. They were really left out to dry by the bad giveaways though. Could they have done more to close down and stop crosses from coming in? Absolutely. But soccer is a team game, and when everyone plays poorly everyone gets the blame.

Could we bring in both Jordan Smith and/or Sam Adekugbe? I don’t think Smith deserves to get a chance yet, put perhaps it would be nice to see some super-pace out in the left fullback position in Adekugbe. And if we are going to lose so badly, we may as well try and get some goals in a blaze of glory? On second thoughts, having both fullbacks bomb forward would likely unbalance the whole team, but this could be a tactic Carl Robinson chooses to go with this week.

The midfield was also dreadful against DC. What midfield there was.

Russell Teibert could not pass forward. He may have won four tackles, but we need someone creative to make things happen. Teibert (defensive midfield) and Jacobson (a defensively minded box to box player) don’t scream creativity to me. Cristian Techera just ghosted as the game went on, and Marco Bustos was poor and didn’t have the start everyone was hoping he would have (perhaps a product of playing out wide?).

The forwards were even worse.

If Techera ghosted, then Kudo was the shadow of a ghost. I can’t even say anything about him because I couldn’t see him on the field. Seriously though, he needs to get into the box. That is what he was billed as in preseason, but where is it? Every time he is in the box he just shrinks away. Is this league too physical for him? It’s looking like it might be.

Perez unfortunately was not too great either. We need him to hold up some long balls. He could not do that against DC. What kind of target man is that?

With these types of players I would not play the 4-4-2 again. The only way I see us getting points out of RSL is if we sit deep, go back to the 4-5-1 defensive formation that breaks hard on the counter into the 4-2-3-1. It would at least give us some defensive spine which we know has won games in the past.

Kekuta Manneh may have been injured but he should get the start for showing some life instead of Techera. Perhaps we can at least use whatever pace is left in him as he gets back to full fitness. Hell, he may even snatch a goal.

Rivero showed how important and smart his hold up play can be> He seems to be back to full health and should be getting the start this game against RSL. He is so important for linking the midfield to the attack. Without him we looked lacking in that connection; hopefully he can start the game. Neither Kudo nor Perez should be starting. The latter limped out of training on Thursday and may not even be making the trip at all.

There is still a question mark over the health of Nicolas Mezquida. He was training Thursday and if he’s good for the start, he should get it. He can press the ball well and win it back. A rare thing for an attacking central midfielder. DC showed how great it can be to win the ball high up the pitch. Mezquida can help us do that.

If Mezquida can’t start, we may be looking at Christian Bolanos in the number 10 role, but there is still concerns over whether he is fully fit after missing the DC trip with a dead leg. Otherwise, perhaps it is time to look at some depth options. Perhaps Bustos would do better there than on the wing. He does prefer, and seem to excel, when he gets centrally for the WFC2. Whether Robbo would risk another start so soon after last week’s poor outing is unlikely.

On the wing perhaps we should be seeing more of Erik Hurtado. At least he can be dangerous on the counter. Although I do worry about his defensive positioning and his dribbling. He would provide a nice threat on the counter. He and Manneh seemed to link up nicely during the last parts of the game, perhaps it should be given a chance?

We are getting another player back that we desperately need in Laba. He provides good stability and he can win balls. He should replace Teibert. Laba brings positioning and much more calm on the ball than Teibert. Jacobson should be getting the start next to him. He has done well so far; he is not the creative person we need, but he is a physical presence who can help Laba shield the backline. Laba and Teibert have shown they play well together back there last season, however, so Robinson might want to go with that tested option to try and get some defensive solidity back.

As for RSL, they are flying high based on the play of a dreadlocked man and a small man.

Kyle Beckerman is known around the league as someone who can control the game, win tackles and make the smart pass out of the back. If we can’t put pressure on him, then the game will be lost early.

The small man, is Joao Plata. He is small and quick. He is calm and has good feet. And a great free kick to boot. As RSL play a 4-3-3 it would benefit the Whitecaps to jam as many bodies as they can into the midfield to slow down RSL.

Hopefully the Whitecaps can bounce back with a good showing in Utah. They need it.

Will the team have fire in their belly to show that the DC game was a one off?

Will Robinson try and freshen up the defence after last week’s defensive debacle and bring in one or two new faces, including the first start of the year for Sam Adekugbe?

Will the ‘Caps finally score from open play? (Just keeping this question in every week now! Six games and counting. What are the odds they score this game?)

You can’t look past the in-form Joao Plata. He always seems to be a bit of a ‘Cap killer and certainly seems to be hot right now. He is also super crafty. His pace will cause trouble for the ‘Caps backline and midfield for sure.

Nick : 0-2 RSL – They will want to keep their good season going so far. Look for Movsisyan and Plata to score

Dan: 0-0 – Whitecaps manage to tighten up defensively but still fail to effectively attack