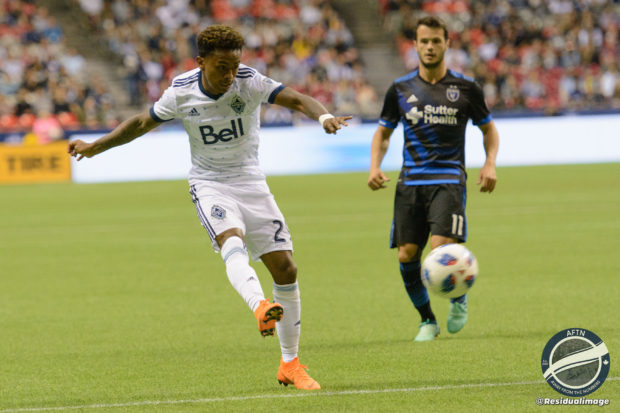 Today the Whitecaps visit San Jose for the first time since demolishing the Earthquakes in a play-in game last fall. I think about that game quite a bit. It might have been the last time I was truly happy about the state of this club.

After winning a playoff game by the ridiculous scoreline of 5-0, I was ecstatic – I left BC Place feeling like the Whitecaps could beat anybody standing in the way of the MLS Cup. The following weekend, Robbo played for the draw at home against the Sounders, and I stood in the Southside knowing for a fact they wouldn’t advance to the conference final. I prefer to think about the happier times, as they haven’t come about too often this season.

Here’s what the Western Conference table looks like right now for the top six and the clubs that are in with a shout: 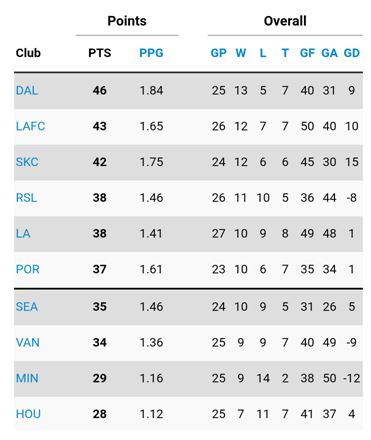 Another 5-0 would go down quite smoothly – the Whitecaps have an awful goal differential, which could prove to be their downfall if the playoff race goes down to the wire and that particular tiebreaker comes into play. It’s also not entirely out of the question – the Earthquakes are the worst club in MLS, and have only won three matches all season.

They’ve also drawn eight, one of them in May at B.C. Place in the teams only meeting so far this season. That one finished 2-2, with the ‘Caps taking the lead 19 minutes in through Cristian Techera before the Quakes scored either side of half time to take the lead. Yordy Reyna saved a point, but it was a disappointing day at the office. And that was at home against this team.

I hope Robbo feels inclined to go all out here – it’s a bold assumption to make but you have to think the Whitecaps will come away with three points here (they have to frankly), and that goal difference could really do with some patching up. I don’t know if it’s even possible for the gaffer to save his job at the moment, but a playoff push would certainly better his odds.
.

LA Galaxy appear to be the team to surpass at the moment, as the Whitecaps are just four points behind them, having played two fewer matches. Portland and RSL could also fall out of the playoff picture quite easily, so the Whitecaps are still in a great position to push towards the postseason. But they have to start picking up three points, starting with six out of six against the team with the worst record in all of MLS.

The Whitecaps have a minor injury problem, with defender Jose Aja still out (although expected back very soon) and fellow centre back Doneil Henry and midfielders Jordon Mutch and Brek Shea also missing through a variety of injury issues.

With Marcel de Jong back in at left back for the oft cramping Brett Levis, Stefan Marinovic will have three of the same back four in front of him that gave up two goals last week against New York Red Bulls. Aaron Maund continues his central defensive partnership with Kendall Waston, as the only two fit centre backs on the ‘Caps roster right now. Hopefully a bit more familiarity with all of the backline will see things tightened up a little.

Alphonso Davies will look to terrorize the Earthquakes defence from left midfield, with a central unit composed of Felipe, Russell Teibert, and Techera, while Reyna and Kei Kamara lead the line once more.

Wondo Watch is upon us as Chris Wondolowski’s strike against Toronto FC moved him to within five goals of the MLS all-time record. He came off the bench to score last week, and if he’s going to add to his numbers he’s going to have replicate that performance with another supersub appearance.

Defender Shea Salinas is unavailable due to suspension, but expect the usual 4-4-2 with Earthquakes mainstays like Vako, Danny Hoesen and Luis Felipe Fernandes in for a Quakes side that has taken four points from their last three matches, including a surprising win over Dallas and last week’s comeback draw with TFC.

Carl Robinson said during the week that this match was a banana skin, but
Vancouver absolutely cannot afford to drop points here against the weakest team in MLS. They have games in hand that they need to win to climb back into the playoff places, and this is a golden opportunity to gain some ground.

If the Whitecaps don’t win tonight, they simply aren’t good enough to be a playoff team.