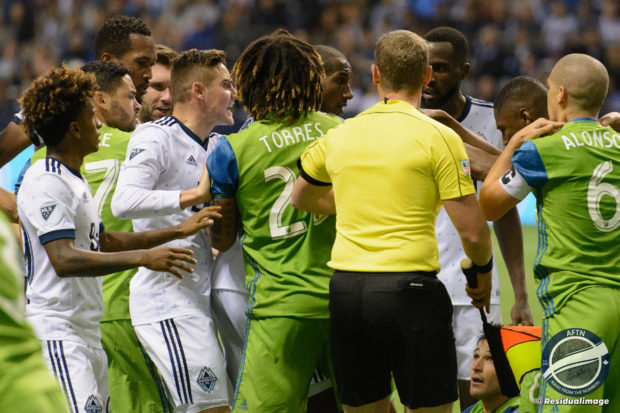 What happens when such a stoppable force meets a very movable object? That is what we will find out on Saturday, as Vancouver Whitecaps, proud owners of the worst defence in the West (40 goals conceded in 20 games), travel to CenturyLink Field to take on Seattle Sounders, the team with the league’s worst offence (16 goals scored in 18 games). This is the Whitecaps’ first Cascadia clash of the season, and an opportunity to face a team in even more desperate straits than they are.

Things are once again rocky in Whitecapsland, as the team has lost three of their last four games – all against non-playoff teams – and have been outscored 10-4 in that stretch. The ‘Caps have now dropped out of a playoff spot, are behind teams who have games in hand, and their schedule will not get easier: coming up in August is a three-game stretch against NYCFC, Portland, and New York Red Bulls. It’s not quite now-or-never time, but with only three months left in the regular season it will get to that point quite soon for the ‘Caps.

One of the few bits of good news to come out of Wednesday’s 1-0 Canadian Championship loss to Montreal was that Stefan Marinović finally made his return from his knee injury. Brian Rowe’s very unspectacular play means the Kiwi should step right back into MLS action this weekend, with the ‘Caps needing all the defensive support they can get.

Kendall Waston should also be fit to play, which means Carl Robinson will have to make a decision as to who should start next to the big man: José Aja or Doneil Henry? Jake Nerwinski and Brett Levis both started against Montreal, which seems to indicate that Robinson will use Marcel de Jong and Sean Franklin at fullback against the Sounders.

In the midfield, second-generation Whitecap David Norman Jr. made his first-team debut on Wednesday, but is unlikely to figure in MLS play this year. Felipe will start, while Efraín Juarez is likely to slot in next to him, unless Robinson wants to shift Jordon Mutch to a more central role. Russell Teibert also started in the Canadian Championship, so he’s more likely to feature in next week’s second leg against Montreal than on Saturday.

Up front, Saturday marks the potential MLS return of Cristian Techera, who missed three games due to suspension. He played on Wednesday, and if he starts against Seattle he could be a spark for a team that desperately needs one.

The other three forward spots seem set at the moment: Alphonso Davies and Kei Kamara have both started in five straight matches, and Yordy Reyna has started four of those five. If the Whitecaps are to score some goals and pick up three points, it will likely be up to Davies and Reyna to break down the stubborn Sounders defence. Davies was missing from Whitecaps training on Friday, however. No explanation was given and it is unknown whether he will be available to take on Seattle. If he can’t then Robinson is most likely going to go with Techera or Shea, although stacking the midfield by adding Teibert into the mix, who does well against the Sounders, is also an option.

Looking at the hosts, the situation in Seattle is fairly bleak. They have only one win in their last six matches, and have scored multiple goals in a game only twice in the last two months. Will Bruin (5) and Nicolás Lodeiro (2) are the only Sounders who have scored more than once, and the team as a whole is on pace to score fewer goals than the 2011-expansion Whitecaps.

Needless to say, offence has been a pretty big issue for Seattle, and it is what they have attempted to address with their big summer signing: Peruvian forward Raul Ruidiaz. The 27-year-old forward is the two-time reigning Liga MX scoring champion after back-to-back 20-goal seasons with Morelia, and he is who Seattle is looking to in a bid to save their season. He could make his MLS debut on Saturday, and will certainly inject some quality into a Sounders side that needs any sort of lift they can get.

This game will mark the Whitecaps’ seventh straight match against a team outside of a playoff spot, and so far they only have nine points to show from this stretch. That is the reason they have dropped below the red line: you cannot afford to repeatedly drop points against teams below you in the standings. We’ll see if they can make good on their opportunity this weekend.