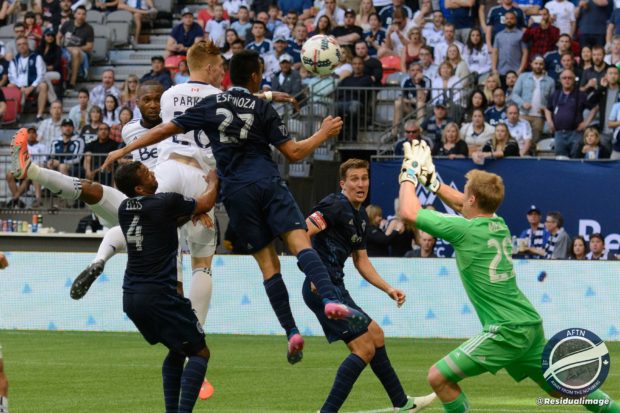 I loathe football clichés. “Every game is a cup final”, “Up and at them”, and “Go out there and work for the team” are three of my least favourites. This Saturday’s Whitecaps game versus Sporting Kansas City has a type of Cup final feel to it. It’s like a clash between every Whitecaps fan’s hope and fear. The hope that this summer form is not a flash in the pan, and the fear that this season, like so many before it, is going to end in an underachieving disappointment.

SKC have actually played in a Cup final of late. They beat New York Red Bulls 2-1 in the US Open Cup final last week in a game where they kept the Red Bulls at arms length until Bradley Wright-Phillips got a late goal to create a tense ending.

This isn’t your Dad’s Sporting Kansas City either!

Graham Zusi is a full back now, but the spine of this successful team is not only stable, with Zusi, Feilhaber, Opara, Besler, and Espinoza; but has been added to in recent years with the attacking addition of Gerso. Sporting Kansas City sit one point behind the ‘Caps with a game in hand, and are the biggest threat to the Whitecaps finishing top of the West. The ‘Caps have a game in hand on both Portland and Seattle now, and are just a point above them also.

Robbo had some strong words for the team after the 3-0 defeat in the Cascadia derby. He mentioned that the game “made up his mind” about a couple of players. For me, this was directed at Sheanon Williams and Russell Teibert, although if I were Bernie Ibini I would also be squirming in my chair a little. The ‘Caps will make the playoffs, and Robbo needs to know who he can trust. I also thought the Whitecaps midfield missed Aly Ghazal a lot, and Tony Tchani’s red card will not make a tough visit to Children’s Mercy Park any easier.

All those negatives aside, the ‘Caps will get to play on the counter attack in this match. I see Robbo opting for a full strength team for this game; Jake Nerwinski in for Williams, and Ghazal back in the center of the park with Andrew Jacobson in for the suspended Tony Tchani. If the ‘Caps new midfield signing, Nosa Igiebor, is available I would prefer to see him feature from the bench as this really isn’t the type of game to be bedding in new players. That can come when our playoff position and ranking is secure.

Stefan Marinović is reported to be starting this game, which will give the Great Dane a break during this busy run in, especially with the Kiwi flying off for international duty with New Zealand after the match.

In the attack, I hope Brek Shea and Cristian Techera come in on the wings on either side of Yordy Reyna. This is our best attacking combination, with the exception of Alphonso Davies perhaps. We will be looking for counter attacking chances again, so pace is vital. Fredy Montero should remain up front. As always with this counter attacking set up, the pace at which the midfielders can move the ball from the centre mids to the wingers on the break will dictate the result of the game.

I’m nervous. A draw would be a more than respectable result, and a win would be too good to be true. This game will answer some big questions: are we the real deal or are the Whitecaps just having an above average season in a dumpster fire Western Conference? All will become clear very soon.

Are the Whitecaps real title contenders?

Will Sporting Kansas City take the top spot away from Vancouver?

Will the ‘Caps show some bite and bounce back from Wednesday’s horror show?