While the Whitecaps have not gotten off to a great start in the MLS League play, this seems to not be affecting the way they play in the CONCACAF Champions League. It is a nice consolation that we are going this far at least. It would perhaps make whatever happens in the season moot if they can get into this Final and then be the first MLS team to win it. The semi-final opponent will be their first from Mexico’s Liga MX, and they are a top team at that.

That team is Tigres UANL, who were was founded in 1960, so they are only a little bit older than the Whitecaps! They have a very different history and have mostly competed in the top flight of Mexican football, however they have had their share of relegation fights in the mid 90s. More recently they have been at the top of Mexican football. Winning the Liga MX titles in 2011, 2015, and 2016, as well as winning the Copa MX in 2014.

Not only have they been having domestic success but they have also been doing well on the continental stage. In 2015-2016 they were CONCACAF Champions League runners-up. More impressive than that, however, was them being runners up in the Copa Libertadores. Tigres had a decent chance to win that trophy before losing 3-0 away to the eventual winner River Plate. That final was very interesting and they were somewhat heated games to say the least.

Tigres will be looking to apply early pressure, but it also depends on how seriously they will take the threat of the Whitecaps. They do have lots of depth in terms of players they could use. They also have the French international Andre-Pierre Gignac, who is lethal for this team in front of the goal and one of the reasons for the recent success. With players like Chilean international striker Eduardo Vargas (a former Napoli player), the Mexican speedster Jurgen Damm, and the rock of a center back Hugo Ayala, the fact is they have lots of quality from front to back.

Will they deploy that quality? Being this close to the final I do not see why they wouldn’t. The Liga MX is about nine games in and with them in 14th position, they may want to see some positive momentum. A Champions League match against a MLS team that doesn’t have the depth may just be what they are looking for to turn around their season.

Just looking at the history of MLS vs Liga MX, the teams are seriously outclassed. Very few wins have been had. In order to get anything out of this the Whitecaps will need to be at their very best, especially defensively and in terms of discipline. So far in MLS play, Vancouver have not, but perhaps, as they have been showing up in CCL play, there is some hope.

Squad rotation has been the name of the game recently, and although he trotted out a ‘second string’ team in San Jose, the play of some of the players may make for some questions for Carl Robinson from his original gameplan.

David Ousted got a red against San Jose, so there’s not much worry about him needing rest for any MLS games. He’s a guaranteed starter in goal and has been known to steal a game or two. This would be a perfect one for him to commit some robbery. Big ‘keepers rise to these big occasions and it will be a great test for him, as he’s going to be put under pressure from the start.

As for the back line, I would think Jordan Harvey should be starting, alongside Tim Parker and Kendall Waston. Waston will be another player that will need to be perfect in this game. I am just hoping for no straight red cards. Hopefully the communication between Parker and Waston is better than what we witnessed in the San Jose game between him and Christian Dean. We should be seeing Sheanon Williams at right back. I think his experienced head would do well in a big game like this.

I would imagine that Matias Laba will be starting in the defensive midfield area. He will be another Whitecaps player that needs to be sharp if we are to get any result in Mexico. He needs to be able to win the ball and make the smart pass to unleash whatever speed we have and was rested at the weekend to have him at his best.

With Russell Teibert suspended we will see the more experienced Andrew Jacobson starting next to Laba. That may give a bit more defensive spine to the team. Especially with the ‘sit deep and counter’ approach.

Now the big question will be who is going to be the ‘creative’ midfielder. Nicolas Mezquida was showing very well in San Jose and got taken off early. Although Christian Bolanos did well when he came on, I am always a sucker for Mezquida so I say give him a chance, but we could use Bolanos’ ability to control the ball, and for some nice passing. That CONCACAF experience could also be vital in the closing minutes.

Seeing as how Tigres seem to like to bash down opponents with their quality (which lately has been lacking), this may play to the Whitecaps strengths of playing on the counter. As the first game is at Tigres raucous home stadium “Estadio Universitario”, the Mexicans may be looking to put this two-legged semi-final away before it goes back to Canada, allowing them to focus fully on their stuttering league form without having to worry about keeping players fresh for a crucial second leg.

That may allow for lots of space behind the defenders and any slackness will allow Alphonso Davies, and perhaps Kekuta Manneh, to burn them with pace. Davies in particular plays with no fear, so the occasion and the crowd may not even rattle him, providing him with the biggest stage yet to impress his suitors. But will he be targeted for heavy attention by Tigres to shake him up a little?

I would prefer to see these two starting on the wings for that reason, although Manneh played for an hour in San Jose on Saturday and didn’t impress. He may be a bit of a liability defensively, but he could be the difference maker getting a precious away goal. He’s more likely to be saved for later on in the match, allowing a fresh Brek Shea to get the start on the left, with Davies causing problems on the right.

Fredy Montero may not be up to full match fitness, but he is still likely to get the start in this one, but we should see Erik Hurtado come on after at least an hour for some fresh legs up front. We may as well let Hurtado have a chance. He did well enough in San Jose setting up a goal and getting one. He’ll be full of confidence, but can he do it against a better opponent? Hopefully! Also he is speedy and that does wonders on the counter.

If the Caps really want this game. Every player must be at their best, defending and attacking. No passengers allowed. 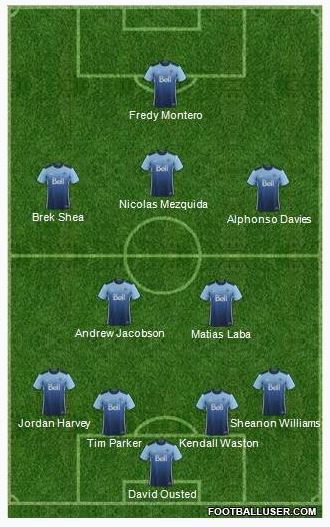 How will squad rotation affect the starting line-up in terms of getting the ‘Caps key guys out there?

Will Tigres’ quality prove too much to handle?

Will the Whitecaps still be in this tie after the first leg?

Andre-Pierre Gignac – There’s no doubt who the ‘Caps have to watch heavily in this one, with his goalscoring record and him winning the Liga MX top Goalscorer award and the ‘Best Football Player’ award. One sniff and he’ll cut the ‘Caps open.

Joe – 4-0 Tigres. Sometimes the opposition proves too much.