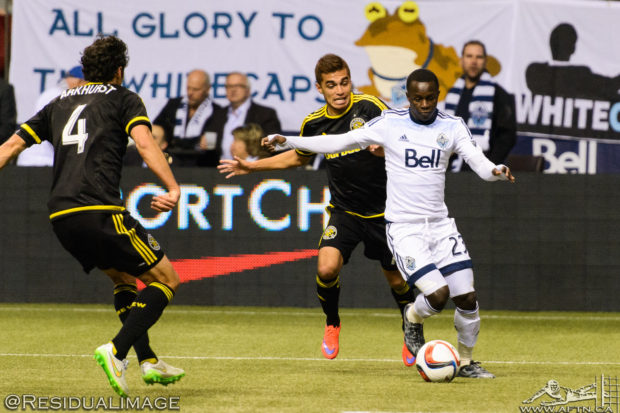 The view is splendid from the top of the Western Conference as the Whitecaps prepare for another Eastern Conference team visit from Columbus Crew this weekend. The ‘Caps have huffed and puffed through the summer, and have put together a very impressive run of form to take the top spot. This battle is by no means over, and with the tightly packed cluster of teams that sit in the Western Conference playoff picture, every game is potentially season deciding.

That being said, the Whitecaps are playing the best soccer that they have played since the prime Pedro Morales-era, only this time, the team seems to have a better balance than those one-man-show days. The backline has matured and found consistency: who would have thought that Jakob Nerwinski would upstage Sheanon Williams’ spot, or for the backup goalkeeper to be pushing David Ousted for minutes? This competition has been fabulous for the backline, and that is before we add Brett Levis to the equation.

The midfield and forwards have been clicking too, with the additions of Aly G and Bernie Ibini standing out as the best newest additions. Brek Shea has played no small part in the flexibility of the forward line, and Erik Hurtado’s performance midweek shows that we have options. The standout, however, is Yordy Reyna. Reyna’s creativity and directness has been the main reason the ‘Caps have caught fire towards the end of the summer.

Columbus will be no pushovers. They are currently 4th in the much more competitive Eastern Conference. Ola Kamara has chipped in the goals that Kei Kamara would have scored before he left for New England, and the evergreen Federico Higuain remains a lynchpin for the league. Columbus have gone through something of a makeover in recent trade windows, most notably trading Ethan Finlay to Minnesota. This is perhaps a shock move to those of us who don’t expose ourselves to the East too much, but Finlay is a different player now to the one that was turning heads all over the league a few seasons ago.

The approach that the Whitecaps take in this game will be decisive. Against Minnesota, the team ceded possession in order to hit the opposition on the break. As Columbus were in town early enough to see that game, they will no doubt be wary of the threat that the Whitecaps pose on the break. However, a draw would not be a great result for the Crew, as they have two or three games in hand on their neighbouring teams in the standings, and will need to create some breathing room.

I expect Robbo to pick a stronger team for this game, as the decisive matchup in this match will be the battle for the midfield. I do not foresee there being so much space to run into as on Wednesday, so it will be short passes and through balls to the wingers that will create crossing opportunities. Another key will be set pieces, which the Whitecaps are quickly developing a reputation for being very dangerous from.

A same again line-up to last Saturday’s win against Real Salt Lake? You wouldn’t want to bet against it.

On a lighter note, it will be great to see the familiar face of Kekuta Manneh in the Columbus team. It’s fair to say that the ‘Caps won that trade, but there can be no hard feelings towards Scooter, who always put a shift in and just needed a change of scenery. Hopefully he doesn’t come back to bite us, but will he even see the pitch?

Will the ‘Caps continue try to play on the break and cede possession to a dangerous team?

Who will control the midfield?

Who will come back to haunt their old team – Kekuta Manneh or Tony Tchani?