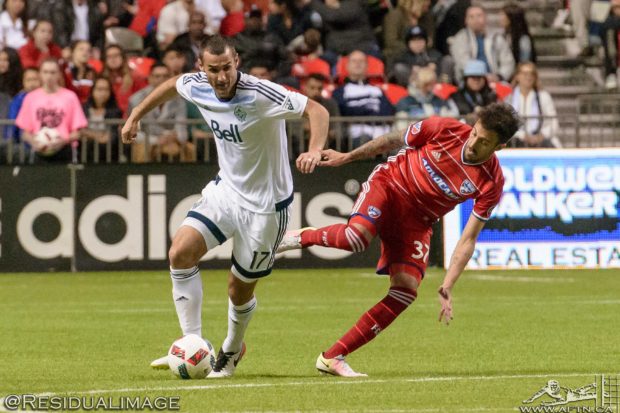 The international break is finally over! While it did have the vehicles of Alphonso Davies’ Canadian debut, USA vs Mexico, and other international matches to vent our frustration at, the time has come for Vancouver Whitecaps to try and maintain a consistent string of performances in their quest to make the playoffs.

A prickly game against FC Dallas is the first encounter on the cards. The Whitecaps fanbase love to hate the Texan team, and will look for a hotly contested and physical battle; a battle that has been made all the more difficult without Kendall Waston, who picked up an injury while on international duty with Costa Rica. Christian Bolanos also returned from Costa Rica with an injury, but the absence of Waston will be hit the team hardest.

Waston has put together arguably his best string of cool headed performances, not to mentioned surging to being the team’s joint third top goal scorer after his double against Atlanta United. Waston’s injury means that the Whitecaps will either have to turn to Cole Seiler, who is inexperienced, but has shown promise, or Andrew Jacobson in the centre back position.

Jacobson would be sorely missed if taken out of the midfield in the 4-1-4-1 system. Carl Robinson may toy with the idea of switching back to a 4-2-3-1 due to injuries, but I think he will stick with the 4-1-4-1 due to the unforeseeable success the team has had by packing the midfield.

For me, the back five should have consisted of Ousted, Williams, Parker, Seiler and Harvey. The recently announced suspension of Sheanon Williams after an arrest on Thursday now leaves the defence as bare bones, with Jake Nerwinski set to slot in to the right back role. There has been some murmuring of Marcel De Jong slotting in as a centre back, a prospect I am not enthusiastic about, but then again, Robbo does hold six levels of coaching licensing more than I do, not to mention 52 more international caps. Williams’ absence likely puts the end ot such talk anyway.

Matias Laba does a better job than anyone anchoring the midfield, and the interplay between him, Jacobson and Tony Tchani has been extremely fun to watch. If these three players are able to get their passing going, the Whitecaps will do well. Dallas usually play a 4-4-2, which would bode very well for a three man midfield to control the game. That being said, the two FC Dallas central midfielders are likely to be Victor Ulloa and Carlos Armando Gruezo, who are both very dynamic players.

With Bolanos out injured, I think Robbo will opt for Brek Shea on the left wing and Cristian Techera on the right. Both these players are on two goals for the season, and we could certainly use some goal scoring wingers as we can’t rely on two centre backs to score three goals a game. The service to Fredy Montero, who should be the one to start up front, has been non-existent at times this season. What is the point having a great striker if he has to drop behind his own wingers if he wants to get a touch of the ball? This is not a question of tactics, but more play dynamics. For example: using him for one-twos to release wingers, running the channels in a coordinated manner, interchanging, etc. It all sounds basic, but the Whitecaps have been so predictable going forward that this issue needs to be revisited.

While FC Dallas lost their last MLS game 2-0 to Portland, the ‘Caps should know all too well what this club are capable of. These games can get physical, and with Waston out of the team, will the team stand up if bullied? I suppose it is a chance to see other leaders emerge, but it has the potential to be pretty darn depressing if the home team get kicked off the park. It will be particularly interesting to see how the back four deal with the two strikers, likely to be Maxi Urruti and Tesho Akindele. Akindele in particular is a tough player to play against.

It will take a team effort to get a result on Saturday, but one thing that may play into Vancouver’s favour as the game grinds on is that Dallas have had a short turnaround and long trip after a very testing US Open Cup game against Tulsa Roughnecks on Wednesday night. Dallas avoided extra time with a stoppage time winner, but a number of first teamers played in that match and will be on double duty this weekend. Can the ‘Caps take full advantage of that though?

Who will fill the Waston void?

Will it be a physical or technical battle?

Can we get enough service to Fredy Montero?