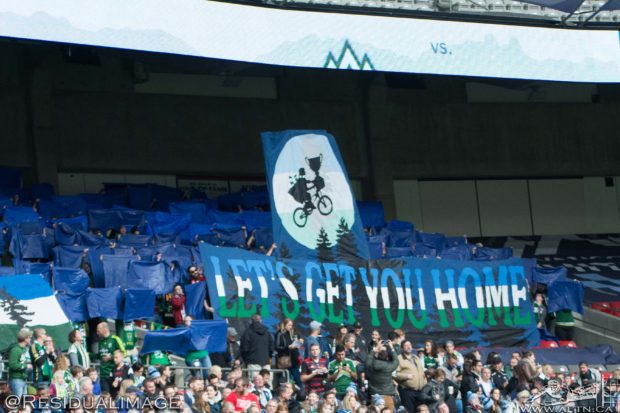 The Whitecaps got a classic smash and grab against LA Galaxy. They came away with all three points and will hope to keep things going, especially now that a very much understrength Cascadia rival is coming to town.

With Cascadia Cup points on the line, the Whitecaps have a game in hand and are a point behind the Sounders and the Timbers, but Portland just recently got smashed by Real Salt Lake and will be looking to bounce back and take control of the Cup standings.

Each team will have some players missing due to the Gold Cup, with forward Darren Mattocks and defender Alvas Powell be missing for the Timbers, and Kendall Waston still away for the Whitecaps. But the ‘Caps will be getting some reinforcements (Alphonso Davies, Marcel de Jong, Russell Teibert) from Canada’s exit from that tournament and it will be interesting to see if they can translate that positivity and success into something for the club.

You also have to factor in that Portland’s team have been decimated with only 12 outfield players available for the trip, and reinforcements having to be called up on emergency loans from their USL side – a team that has only won five points from their 18 matches so far this season.

The Whitecaps are coming off a midweek game, while some players coming in from the Canadian National Team are coming off a game on Thursday. So there may be some rotation, but then Robbo could try to stick with what works after the rest provided by a two week break for the bulk of the squad.

It is hard to find some consistency with the necessary changes that happen due to injuries, international call ups, and needed squad rotation, and the Whitecaps may struggle because of this. But then the Timbers are not LA Galaxy and they seem to have their own consistency issues.

Some things are consistent for the Whitecaps, like David Ousted starting. He was fantastic against LA and hopefully he can have some big moments against Portland as well.

With Waston still out I would not be surprised to see this backline stay the way it has been. Tim Parker and Andrew Jacobson had a good outing against LA and hopefully with Parker getting a larger leadership role he will continue to flourish. Congrats to both of them because they have done a great job whenever they need to fill in for any missing center back. Jake Nerwinski seems to have won his spot for now and he is getting better each game, while Jordan Harvey doesn’t have much pressure on his position as of right now.

This may be the perfect game for Yordy Reyna to get that first start. I would love to see him go for the full 90 minutes if he is healthy. Pair that with Christian Bolanos and Cristian Techera and you have lots of dangerous options in attack in a 4-2-3-1 formation.

Fredy Montero continues to have problems up front but for a lack of better options, we should see him starting. He seems to play better with Reyna on the field so perhaps they can make each other better and bigger threats.

Portland could be lethargic with such a loss against RSL and the lack of available players for rotation, but equally they could use that disaster as motivation for some players to really stand up and make a name for themselves in the absence of others.

They may be missing a stack of players, but they still have all three of their DPs available, so will still be a threat. Hitting them early will be the key, with a lack of real game changing options available to them.

How much rotation will we see from each team due to the midweek games?

How will the Jacobson and Parker centre back pairing hold up against Portland’s DPs and remaining attacking threats?

Will Reyna get the start?

Diego Valeri – As always. The Argentine playmaker is very dangerous in all aspects of attack and with other options taken away from them, expect everything to go through him