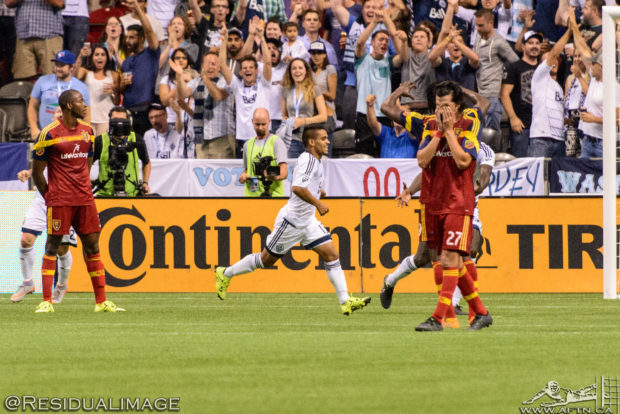 Two teams that are having a rough time at the moment have to play each other in a midweek fixture both could likely do without. Can either take advantage of their opponent’s respective deficiencies?

The Whitecaps, who are in 6th in the Western Conference, will need to start winning in order to get keep their playoff positioning positive. Real Salt Lake, meanwhile, will want to shore up their own playoff place they have in the West, where they currently sit third but find themselves in mixed form.

Real Salt Lake are coming in winless in their last three games; the Whitecaps have not won a league game in the last two, plus they have given up some very late and disheartening goals recently.

RSL have been mostly playing a 4-3-3 to good effect this year. Since the Whitecaps are now without an out-and-out striker, they seem have a choice: do they try and dominate the midfield for this game, or do they try and have some attacking intent with two forwards?

Seeing how the game is at home, the Whitecaps should go for the win. I think we should play with two forwards at the front. The problem is we seem to have our best attacking players injured. With Kekuta Manneh out, the role of pacy forward will likely fall to Erik Hurtado. As Robbo likes to rotate the squad, I could see Blas Perez being rested this game and in his place Nicolas Mezquida could be playing under or up top with Hurtado.

Last week’s formation was interesting, especially when defending. The centre area was packed with defenders, while the wings had lots of attacking movement. One thing that we did do a poor job of was defending those wider areas. With Jordan Smith and Christian Bolanos on one side, Colorado were able to take advantage of large areas of space behind Smith, or make quick combination passes around him.

Will we see one of the new signings to shore up this defensive aspect? Robbo has seemed to indicate not, but just perhaps, it would be interesting to see Marcel de Jong start at either left wing or in the fullback position.

Or perhaps we see Parker slide over if Pa Modou Kah can come in. We do need to shore up our defence, as demonstrated by the recent games. My personal opinion: I would like to see Harvey, Waston, Parker and de Jong man the backline. Perhaps shaking up our wide defending will stop any fires before they start.

I didn’t mind the Andrew Jacobson and Matias Laba midfield. For the most part they were able to shut down any attacks coming through the middle. However I would prefer to see Pedro Morales sitting more central instead of on the wing. If he sits in a more central position he will be able to spread the ball to more areas. Not only that, Morales seems to be better at defending in the central areas than on the wings. I would go with Laba and Morales in the middle and rest Jacobson for the next game this week.

As for the wings: Bolanos could start again; if de Jong starts behind him it should give him more confidence to go forward. I would like Bolanos to have better positioning on defence but that is not what he was brought in for, he is more of a secondary creator from the wings.

Now that Cristian Techera has finally hit the back of the net this season (sure it was just a penalty kick), he hopefully has found more confidence going forward. He should get a start and see what he can do.

David Ousted played magnificently in the game and really should not be blamed for those goals against. If anything many of his saves gave the Whitecaps a chance. Hopefully he can pull some more of these saves off again against RSL.

Real Salt Lake have been playing well. They have a fantastic 19-year-old centre back Justin Glad, and the always present Kyle Beckerman. They have the quick and nimble Joao Plata, who has been combining well with Movsisyan, and have been playing a good brand of pragmatic football, possessing when needing to and counter-attacking when the opportunity presents itself.

The Whitecaps will need to take control of this game early if they want to get a positive result. That way they can limit any damage the dangerous midfield and forwards of RSL can do.

Will either of the new signings participate ?

Who will be rested for this game ?

Can one of the strikers step up ?

Yura Movsisyan – he has netted seven times for RSL since returning to the MLS. He knows the league and he knows how to put away his chances.

The View From 202 Crew’s Predictions :