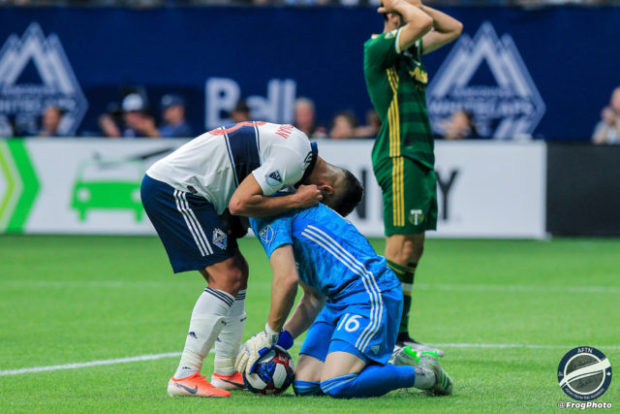 It’s been just over five whole months since the Whitecaps last played an MLS match, but that changes this Sunday when they host Portland in their home opener! It’s great to finally see the ‘Caps back at BC Place and…

Wait, you’re telling me that they’re playing out of Utah this year? Oh, well at least we get to see a couple of fun new additions in Caio Alexandre and Bruno Gasper and…

Oh, they’re not available to play yet? And Ali Adnan is stuck in Vancouver still due to visa issues? And Érik Godoy, Derek Cornelius, and Leonard Owusu are all hurt? Bit of an anticlimactic start, isn’t it?

Overall, the ‘Caps are not exactly where they would be hoping to be, from both a supporter and a club perspective. Forget all the crying out for a big DP number 10, can we actually get the players that were signed involved? And also get one of our two current DPs across the border? The team that will be lining up against the Timbers will definitely not be the ‘Caps at full strength, and that is an issue as it can be argued just how effective they can/will even be when they do get to full strength.

So, what can we expect to start the season? Given that they’re playing out of a new home, with a somewhat undermanned squad, you can be forgiven for feeling a bit pessimistic about how the ‘Caps might start out of the gate. Getting a 3-2 win last weekend on the road in Chicago to close out a short preseason is nice (especially seeing Lucas Cavallini bag a couple goals), so we’ll see if they can take any lessons and momentum from that and apply it to get a result Sunday.

With regards to the likely line-up, Marc Dos Santos put out the same XI in both the preseason matches against Real Monarchs and Chicago, and outside of needing to replace Owusu due to his injury, I’d imagine the rest of the starters are the same against Portland.

Both those games were played in the 4-4-2 formation that was used at the end of last season, with Maxime Crépeau healthy and back in his starting goalkeeper role. He played just four matches all of last season, so it’s great to see him back and ready to go now, with both Evan Newton and Thomas Hasal jockeying for backup minutes in the event they ever decide to rest Crépeau. 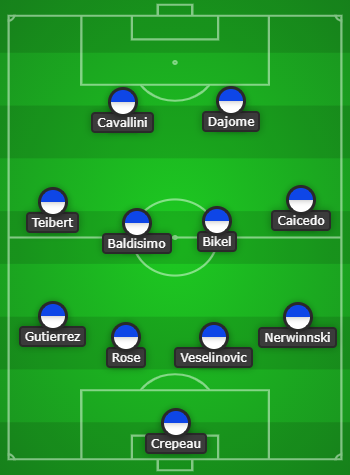 The backline will likely look pretty different in a few weeks, but for now the quartet of Ranko Veselinović, Andy Rose, Jake Nerwinski, and Cristián Gutiérrez is the obvious group out of those who are available. It’s not a defence that leaps off the page by any stretch, and the ‘Caps will just hope that they will be able to tread water defensively until Godoy, Adnan, Gaspar, and Cornelius can be ready to go to provide more options.

In the midfield, Michael Baldisimo is the most obvious pick to slide into the line-up and replace Owusu, partnering Janio Bikel in the centre of the formation. The young Canadian played just 65 minutes in the three preseason matches, but hopefully playing with the U-23 National Team in their Olympic Qualifying Tournament recently will have him up to a decent level of match fitness.

While Baldisimo is the most like-for-like replacement for Owusu, MDS could also choose to instead bring a Ryan Raposo or Theo Bair into the line-up, shifting Russell Teibert into the middle instead of out wide, but I feel that is less likely. Teibert – still oft-maligned within the fanbase – seems to have settled into a newish role as a wide midfielder, a more conservative winger that allows the fullback on his side to push high up the pitch when in possession.

On the other wing from the longest serving Whitecap is one of the new boys, as Déiber Caicedo started out wide in both main preseason matches. The 21-year-old Colombian has some real expectations on him due to the noteworthy price tag it took to bring him to the club, and we’ll have to see whether his attacking promise can be turned into output in MLS play.

Up front, Cristian Dájome is the most likely partner for Cavallini, and he scored in both main preseason matches, once from the penalty spot. One of the more successful (so far) signings in the Dos Santos era, he has a strong work rate and has shown flashes of good chemistry with Cavallini. The big Canadian is coming off a strong preseason for the second straight spring, scoring three goals to add onto his hat trick against the Cayman Islands for the National Team back in March, and he will again have a lot of pressure on him to bag some goals this year.

On the side of the visitors, the Timbers are coming in hot, having just smashed CD Marathón of Honduras 5-0 to book their place in the CONCACAF Champions League quarter-finals. They did not play any preseason matches, with the two tilts against Marathón serving as their sole prelude to MLS play, but that did not seem to hinder them too much in those clashes.

It was a Yimmi Chara hat trick that propelled them to victory on Tuesday, while the two seemingly eternal pillars of Diego Chara and Diego Valeri control to patrol the middle of the park. Coming off a 2020 season where they finished 3rd in the Western Conference (though they lost in the first round of the playoffs on penalties to Dallas), the Timbers will remain a formidable test.

Recent history has not been kind for the ‘Caps against their Cascadian rivals, as Portland has won three straight in the matchup, including two 1-0 victories last fall. Before this stretch, however, the ‘Caps had won three in a row of their own, so maybe they will be able to reverse this poor head-to-head run.

It’s that time of the year again! It’s a month later than usual, with the Whitecaps playing in a whole different country, but they will be back in MLS action this weekend, and taking on a very familiar opponent. It’s the same, but so different, and that will likely be a theme for this year. Let’s just hope they can kick off without any issues, and that we can see our team on the pitch once again.