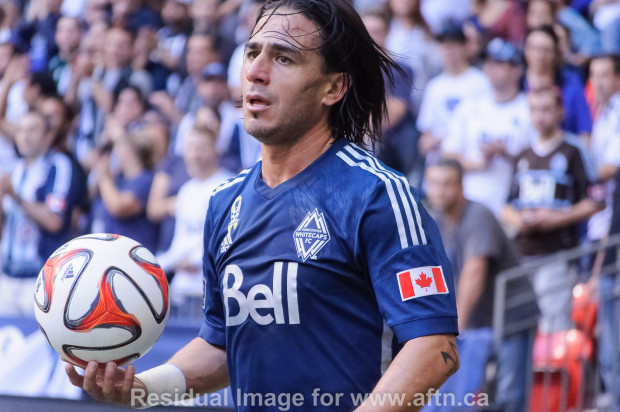 Every single Vancouver Whitecaps player will be up for Saturday’s Cascadia Cup clash with Seattle Sounders, without a doubt.

The clubs have a history going back to 1974, but this game may have more riding on it than any of their previous 13 meetings in Major League Soccer.

Vancouver have gone to Seattle needing wins to keep their playoff hopes alive and to lift the Cascadia Cup. They’ve been successful. This time around, the tables are turned.

The Sounders need the points as they fight for their playoff lives and they need to get at least a point to stop the Whitecaps making it three straight Cascadia Cups. Vancouver on the other hand are looking to add the Cup to their trophy haul this season, but have their eyes on some much bigger prizes in the Supporters’ Shield and MLS Cup.

It’s going to be a cracker and a game that Whitecaps midfielder Mauro Rosales has been looking forward to for a long time.

Injuries have kept Rosales out of the ‘Caps two previous league meetings with his former side this season, but this time he is fully fit and raring to go, in what will be an emotional game for the Argentine.

But as much as the Sounders will always hold a special place in his heart, it’s all about the ‘Caps for Rosales now.

“I’m very excited,” Rosales told AFTN. “They’ve been an important part of my career here in North America. But I’m a professional. Now I’m defending the Whitecaps and I’ll be giving 100% like I always do. No matter who is in front of us, we need the points, we need to win. I’m 100% with this team.”

With six games left in the regular season, the Whitecaps know that if they can win out, then the Supporters’ Shield will be theirs to lift come October 25th.
It doesn’t matter about the fierce local rivalry, right now, Seattle are just the next team in the way to that goal.

“It’s a really, really good game for us in everything, in both MLS and Cascadia Cup,” Rosales added. “It’s a great game for us to keep going forward in our ambitions that we have.”

But with so much at stake for both sides, and with Baldomero Toledo the man in the middle, it’s a game that could quite easily get out of hands.

It’s something the ‘Caps are very much aware of.

“We’ve just got to keep calm. If we keep calm and play our football then we’ve got a good chance of winning. If we don’t, and we lose our minds and lose our focus, then it’s going to be more difficult. We’ve got to make sure we’re very well organised, we understand our roles and responsibilities and we go and perform.”

That might be easier said than done of course, but it’s a key to success and goalkeeper David Ousted took the rhetoric a stage further.

“It means a lot to both teams,” Ousted told us. “But we need to be aware to get at it with cool heads and calmness and play our game, because if we don’t, I don’t think we stand a chance.”

That cool heads and calmness aspect is something that Rosales has been preaching for the Whitecaps home performances all season. When we’ve chatted before, he’s highlighted that the team seem a little too keen to entertain at BC Place, getting excited, pouring forward and leaving themselves short at the back at times as a result.

With a number of feisty Cascadian derbies under his belt in his five year MLS career, Rosales know what it takes to win them and feels the ‘Caps are more than ready for whatever the match will throw at them.

“I think everybody know which kinds of games we are playing,” Rosales told us. “This part of the season, with six games left, everybody’s looking for points, everybody’s needing points. Our ambitions are high. We wanted to become leaders and still being in the first position, we have to win these kind of games.

“Important games like this give you a plus. A plus in confidence, a plus in being a better team. It’s a big test for us. Everybody’s motivated, everybody’s ready and we know which position we are. Everybody has to be calm. Everybody has to work hard, knowing that this is one of the games that we always talk about. Just be ready.”

Rosales spent three seasons in Seattle, making 86 regular season appearances and a string of others.

It was his first taste of North American soccer and the talented playmaker has many happy memories from his time with the Sounders. But all that said, he’s a Whitecap now and Rosales feels he can reach higher achievements now that he’s here in Vancouver.

“Seattle brought me to this league and helped me discover what it is all about,” Rosales said of his Sounders memories. “They trusted my qualities, they trusted my ambitions in soccer. They brought me here to the league and always I will be thankful of everything they did for me.

“I had wonderful years through the seasons that I played with them. Obviously I enjoyed a lot being a part of that organisation. But now, what I’m doing is just a part of what I did before.

“It’s going forward to more and more challenging games, more challenging tournaments and being part of this [Whitecaps] organisation makes me really, really happy. I’m enjoying the time here and I’ll be thankful forever what they’ve done for me.”

Rosales’ contribution to the ‘Caps is felt both on and off the pitch. We’ve talked before about the role he plays with the younger players and how he’s regularly the first man on the training pitch.

At 34-years-old now, will Rosales still be with the Whitecaps next season? Hard to say, but the Argentine still feels he has a few years left in him yet.

Will those be in MLS?

Rosales has seen the league change a lot already in his five years in Major League Soccer and the one thing he is certain of is that the quality is only going to get better and better in the coming years.

“The quality of play is growing year by year,” Rosales said. “A lot of good players are coming to the league. The competitiveness, even when you go and face any kind of team, you don’t know what will be the result because you have to work really, really hard to get the points. Playing on the road, playing at home, it’s always difficult. It’s part of the league, so I’m enjoying that part too.