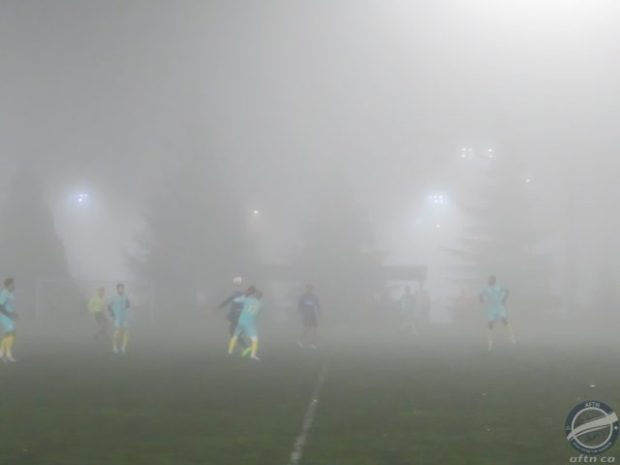 Heading into Week 10 of the Vancouver Metro Soccer League (VMSL) season, no-one had got the better of Premier Division league leaders BB5 United CCB, but the unbeaten Surrey side couldn’t get the better of the foggy conditions at Burnaby Lake on Friday night, although they gave it their best to do just than.

BB5’s game against Inter EDC was abandoned in the first half in worsening conditions and amidst some controversy over whether a goal should have stood or not.

The fog was coming down as the teams kicked off, and while they weren’t too bad to start with, you could tell early on that it was going to be a challenge to see out the full 90 minutes.

Both teams created some chances in the opening exchanges, but CCB got the breakthrough in the 33rd minute when an Inter player played the ball back but Caleb Clarke was in the fog to pounce, run in on goal, and seemingly give BB5 a 1-0 lead. But not so fast. The farside linesman had his flag up and the referee went to consult. The nearside linesman had a clearer view and indicated to the ref what had happened and the goal stood, much to the anger of Inter.

But this was to be the last action of the game as it was clearly farcical conditions. After several minutes of discussion, the refereeing crew called the game and this one will have to be replayed at a later date. Ironically, the fog then started to clear.

You can (kind of) see our highlights from the match in the video below:

The abandonment gave Coquitlam Metro Ford Wolves the chance to go top and they seized it with both hands on Sunday evening, demolishing Burnaby Selects White Eagles 6-2 at a very wet Burnaby Lake. Goals by Joseph Powell and Dawit Genet saw Metro Ford 2-0 within the first 10 minutes. But if they thought they were in for a comfortable night at the office, they weren’t. Vladyslav Matlash scored on the half hour mark to pull one back for the White Eagles and they completed the comeback in the 40th minute thanks to a Coquitlam own goal.

But this was to be as good as it got for the White Eagles and Metro Ford took the game back over. Jovan Blagojevic put them back ahead just before half time and a second half brace by Carlo Basso and a second of the night from Genet saw the Coquitlam side come away with the three points they were looking for and they moved into first place, for now.

Croatia kept the pressure on the top two and moved into third place in the standings, just three points back of Metro Ford, with a hard fought 2-1 victory over BCT Rovers Hurricanes on Sunday afternoon at Burnaby Lake. Edward Tsen gave Croatia the lead, but the Hurricane tied things up just past the hour mark when Nick Soolsma scored from the spot, his joint Golden Boot leading 10th goal of the season. But the teams were just level briefly and Nikola Crnjak put Croatia back in the lead, with what was to prove to be the match winner.

Rino’s VSC Coastal fell to 4th after a 2-2 draw with last placed NVFC Norvan at South Surrey Athletic Park on Saturday afternoon. Jurgen Weinzcok put Norvan ahead early, but Jake Starheim levelled for Coastal five minutes before half time. Wale Oladoyinbo then fired Coastal ahead just past the hour mark, but Norvan weren’t to leave empty handed and Beckham Hatch curled home an equaliser, for a share of the points.

The other VMSL Premier match this past weekend saw SFC Pegasus and VUFC Hibernian play out an entertaining 2-2 draw at Newton Stadium on Friday night, although the Hibs will be wondering how they let this one get away from as they dominated and were in control for much of the game. Connor Mrazek put VUFC ahead seven minutes in when the ball broke to him in the box and he finished with aplomb. The visitors had a number of chances to go further ahead, but they had to wait until a minute into stoppage time to double their lead when Sebastian Dzikowski swept home a corner to send Hibernian in at the half 2-0 up.

VUFC continued to dominate but couldn’t add to their tally and they were punished when Pegasus shocked them with two goals in a five minute spell late in the game. Daler Tokhirov hit a long ranger in the 78th minute to pull the first back for the Horsemen and the comeback was completed five minutes later when Jonathan Rinaldi fired home from just inside the box.

You can see Sports Revolution’s highlights from the match below or on their YouTube channel:

So after all of that action and drama, the VMSL Premier League standings look as follows: 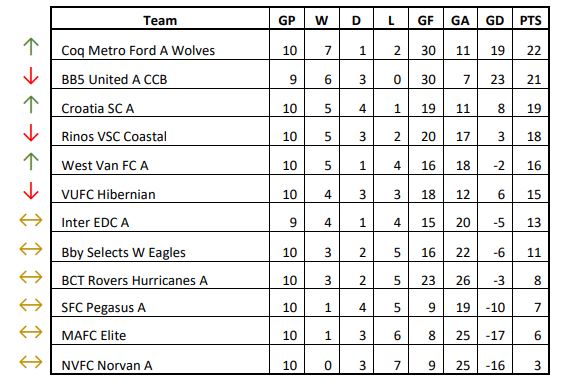 Another exciting weekend is in store in Week 11 and some dry weather too. If you want to get out and see some local soccer action, here’s what’s on the slate.