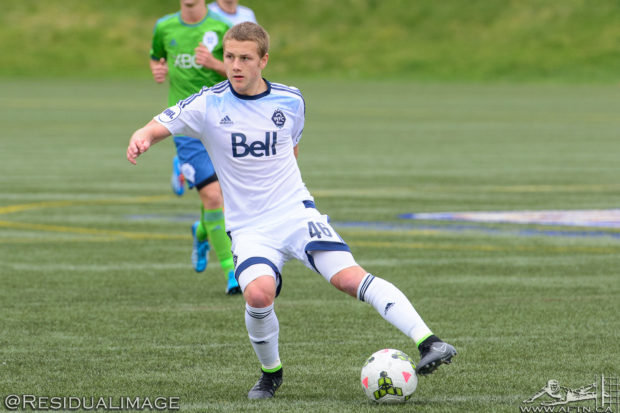 Progression. It’s what every young footballer strives for at their club. A natural progression through the ranks from the academy to a pro contract to minutes with the reserves and then breaking through to the first team, before finally staying there.

That’s how it works in many places all over the world, but it’s not that smooth a path in North America and in Major League Soccer in particular. The result is a number of talented players lost to the domestic game as they chase better opportunities overseas.

In Scotland and England, a young player can light it up for a club’s reserve or development team, impress the first team manager and get his reward of a spot in the first team squad for a league match or even a starting spot for a fringe line-up in a cup tie.

Former Whitecaps Residency striker Dario Zanatta is a shining example of how that works – impressing with Hearts U20 side, forcing himself into Robbie Neilson’s first team plans and becoming a squad regular with a new four year contract by the end of the season.

It’s not something he could have done anywhere near as easily if he had stayed in Vancouver.

“That was definitely one of the big things about [going overseas],” Zanatta told the AFTN podcast a few weeks back. “If you’re signed to the club, you can play for any of the levels… I knew that if I went over there and I proved myself with the under 20s that I could easily be involved in the first team quite quickly.

“I think that’s one of the big bonuses of playing over in Europe. It’s something I think hinders some of the boys in Vancouver and in MLS.”

Up until the start of this season, it didn’t matter how well you played for the Whitecaps Residency or USL sides, if you didn’t have a MLS contract, you weren’t going to see minutes in the league, cup or Champions League.

But times they are a changing, albeit in a very baby steps manner.

The new MLS players’ collective bargaining agreement came along and a slight change was made. MLS clubs were allowed to call up some of their USL players a maximum of four times a season to their first team squad. But obviously, MLS being MLS, it wasn’t as clear cut and simple as that.

Those call ups could only be for Canadian Championship/US Open Cup matches, Champions League games, and friendlies. The only way you could use such a call up for a league match is if the squad was decimated by injuries, suspensions and other absences, and there were less than 15 players available.

Nowhere near an ideal solution to rewarding young talent, but at least it’s a start, and one that thankfully Vancouver have been utilising well so far.

For players like Alphonso Davies, it’s worked like a dream. The 15-year-old had already featured in Vancouver’s first team during the preseason and earned a USL contract. The ‘Caps saw the potential in Davies and knew he needed to be tested regularly at a high level to continue his development, along with the benefit his game would get in a first team training environment – but only when it’s the school holidays!

The result was Davies earned his four “call-ups” for the ‘Caps Canadian Championship games against Ottawa and Toronto. But then that was them all used up. The ‘Caps had to sign him to a MLS contract or let him bide his time till next season. We all know how it ended.

Davies signed that MLS contract, but there’s only a certain number of those that can be handed out any one season, and therein lies the problems for developing others. If you want to add more promising talent, someone else has to move on, and it’s rarely going to be one of the already established or experienced guys. Reducing the roster size from 30 to 28 killed the already limited spots within squad even further. There seems little appetite for reversing that.

If a team suffers a quick cup exit and has no other non MLS matches, there’s no other opportunities for these USL guys to be called up to. In the US Open Cup, many teams will be one and done.

Thankfully for Vancouver, the Champions League campaign affords that opportunity for some others. Four of the ‘Caps USL standouts this season earned the chance to impress in Trinidad and Tobago on Tuesday night against Central FC.

WFC2 captain Kyle Greig came on as a late sub, and Sem de Wit was an unused sub. The experience of the game and the occasion, and what mentally seeing their hard work rewarded will do to them for the rest of the season, is immeasurable.

For goalkeeper Spencer Richey and left back Brett Levis, Tuesday’s game was a whole other level from even that. Both started, both played the full 90 minutes, both impressed, both excelled and both contributed to the Whitecaps clean sheet and road win. They’re knocking loud and hard on the MLS door. Not that there is any space on the other side of it right now.

Richey was excellent in his first minutes with the first team, making five saves on the night, including a couple of really big ones to keep Vancouver ahead and secure the three points. Levis (who used up the second of his four call-ups after playing well in a late cameo appearance in the friendly against Crystal Palace) was sharp, throwing himself into challenges, playing solid defensively and tearing up that left wing.

Both looked like they belonged with the first team squad and they did their future MLS aspirations a world of good. Without this new four call-ups rule, none of this would have been possible. They may have continued to impress in USL, but no-one could be 100% sure that they were able to hang at that next level. This way the ‘Caps get to try before they buy.

Right now, Levis can play two more first team games this year, then that’s it for him until next season. No matter how well he’s doing or how well he’s progressing, that aspect of his development just stops for a few months unless the ‘Caps can find a way to make space and offer him a MLS deal. How is that good for players?

Next year, the Whitecaps won’t have a Champions League campaign to utilise these call-ups. There’s no guarantee they’ll have more than two Canadian Championship games either. Opportunities for next year’s USL standouts won’t be so plentiful under the current rules. That hurts the ‘Caps and hurts the players.

The set pathway to the first team from the Residency is very clear, but the best way of progressing through it is not easy to achieve. Something needs to change to allow, not just the Whitecaps but clubs throughout MLS, the chance to blood more up and coming players in first team environments without them having to have MLS contracts.

I yearn for the day when the ‘Caps and other clubs can look at a player lighting it up with their U18 or USL sides and think, let’s reward him with a spot on the bench for next weekend’s league match and see what he can do by throwing him on for a few minutes towards the end.

That is possible in the USL, where teams can utilise academy call-ups. WFC2 have done just that this season with three of the U16 side.

For that to happen on a larger scale though, a lot needs to change in MLS, and it all feels many moons away.

The easiest way would be to allow the USL call-ups to play some MLS minutes and not just non league games. Also expand the rule to cover players within clubs academies. That would afford teams not involved in a deep cup run or Champions League campaign the chance to take a look at some of their guys.

There would obviously have to be some kind of extra qualifying criteria to prevents clubs like LA or Seattle trying to cheat the system by signing some top talent to a USL deal then using the call-up mechanism to circumnavigate MLS roster rules. Players should be with their club for a set period of time, and have played a significant part in their USL or academy campaign that season.

I’m sure the MLS Players’ Union wouldn’t be fully behind such moves, in that it takes away opportunities and minutes from already signed players, but nothing should light a bigger fire under a fringe player’s ass than the knowledge that a younger, and perhaps more talented, player is pushing hard to take his place on the squad. There’s a lot of homegrown and college players throughout the league that feel they’ve made it once they’ve inked that MLS deal, before disappearing without trace.

We’ve talked numerous times on here before about the lack of actual quality opportunities for the top talent in this country. Making the first team squad but never playing any first team minutes does nothing to get players to their next level, and in many cases it just leads to them actually regressing backwards and building frustration.

USL is excellent, but there’s also the feeling that you have to share the minutes around. WFC2’s goalkeeping situation this season is a great example of that.

Clubs also need to be able to sign as many homegrown deals as they wish to in any given season. I’d personally have homegrown players count as a bonus to MLS clubs when it comes to their rosters. Have the 28 players but as many homegrowns as you want to sign on top of that. Reward clubs like Dallas, NYRB and Vancouver who plough a lot into their academies. Other sides that want to just spend and bring on fewer homegrown talent are penalised as a result. Give clubs an incentive (although they should need one), to bring on board one of their own.

But as long as there is basically a closed shop when it comes to MLS squads and signing mechanisms, young players will continue to feel that their best bet of playing regular, competitive, top level football is to make the move overseas. The grass isn’t always greener over there, but the opportunities are far more plentiful.

Will we ever see an open route to blood and reward up and coming talent in MLS? My heart says yes, but my head is a lot more cynical and pessimistic. But if the governing bodies and leagues are really serious about taking their young players to that next level of play and competing with other countries and leagues around the world, it needs to happen.