The format of next season’s Major League Soccer schedule has been the subject of much debate for several weeks, if not months, now.

Will MLS keep the balanced schedule and increase the amount of regular season games played to 36? I think we can already say no to that one.

Or, as most people expect, will we go back to an uneven conference based schedule, with more emphasis on games against Western/Eastern rivals? And will there actually be a decrease in the 34 regular season games played by clubs this year?

Whatever the MLS bigwigs end up doing with the fixture list, there’s going to be a lot of unhappy people.

The introduction of Montreal Impact to the League throws out an uneven number of teams for the first time since 2009, and only for the third time in the MLS’ seventeen year history.

AFTN’s easy solution would be to not let the Frenchies into MLS in the first place. It really goes without saying that’s not happening, but we can dream!

Even without the introduction of a new team, this discussion would still be taking place.

Domestic football in North America faces problems leagues elsewhere in the world don’t, due to the vast expanse of the continent and the hugely varying weather patterns across it. Add in three timezones and jetlag, and it’s not the easiest gig you’re going to get as a professional footballer, or even a fan.

The Whitecaps (and to a lesser extent, Toronto) have had it tough. Not only are the Caps a side on the west coast, they also have to play 47% of their league games in another country, clocking up tens of thousands of miles in travel in the process (I make it around 65,000 travel miles for the season past).

Is there an option on the table that works best for the Whitecaps? 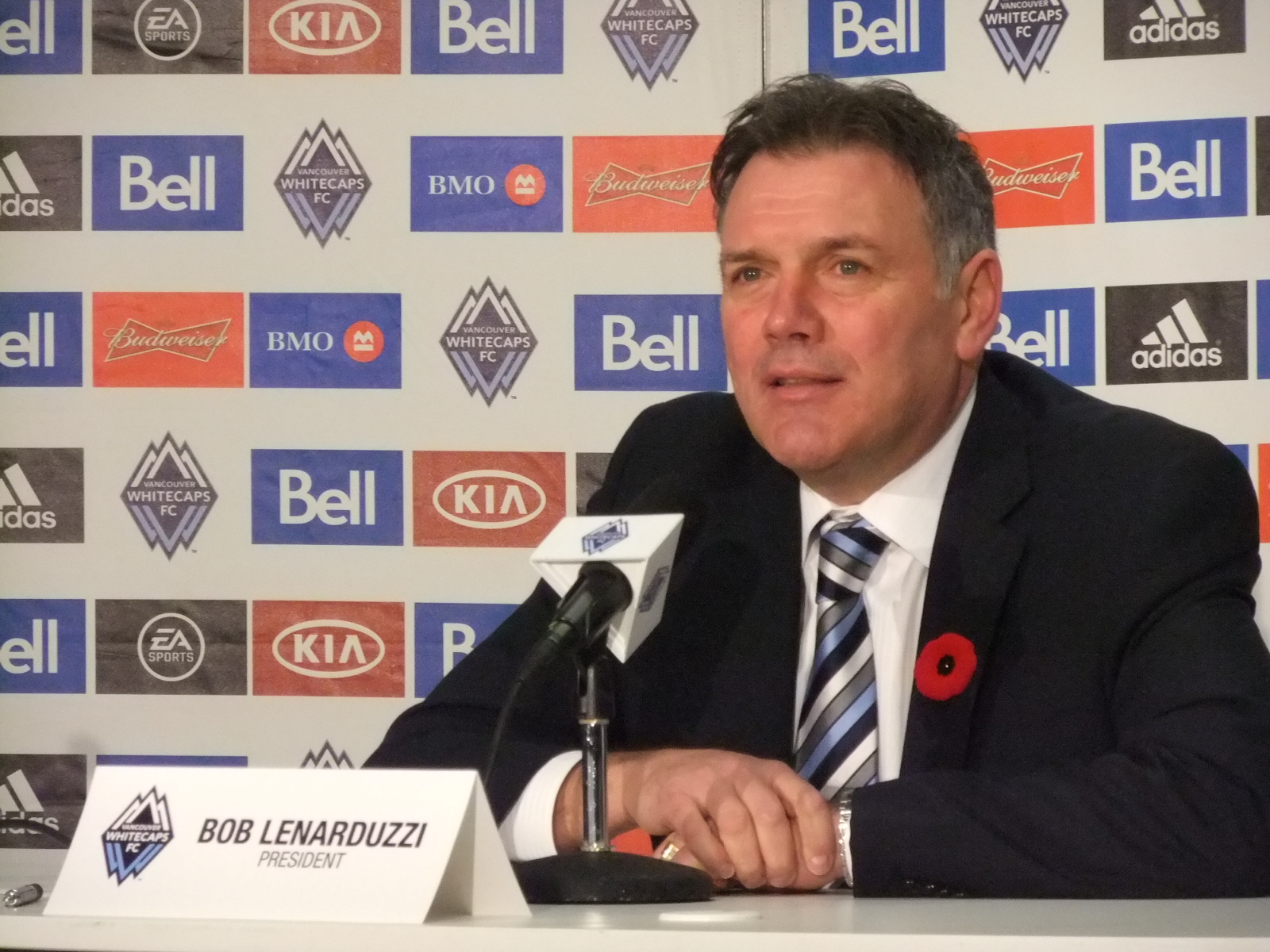 AFTN asked Bobby Lenarduzzi whether he had a preference as to how the League would look next year. More regional or keep the cross conference games?

” What I do understand is the difficulty of a full schedule, where everyone plays everyone, home and away. We’re getting up to too many games and with all the competitions that are being played, if you’re a successful club, ultimately you’re going to be penalized for being successful. So I think the League needs to look at how they’re going to be able to hold firm on the number of games and make sure that we’re not playing a team too many times.

It may be that there’s an additional game required against a regional rival. People have their concerns and other people have their delight with the fact that that could happen on a regular basis.

I actually think it’s going to come down to trying to make sure that we’re not spending a lot of our time on planes and exhausting players to the point where we’re not seeing the best performances.”

No matter how much you prepare a player for travelling such distances, they’re going to find it hard and especially if they’re coming from somewhere like Europe where most matches are at a closer distance than even our nearest away game.

Players with young families find it the biggest struggle and I think it’s fair to say that a number of players (and officials) at the Whitecaps found this season’s travels very hard.

It certainly is a factor for attracting any player to come and play in Vancouver or in MLS in general.

But what is the answer? Is there an easy solution? Sadly not.

A balanced schedule of playing each team, home and away, would always be our preferred choice.

It’s the fairest way, especially in a league where the difference in strength and abilities between the eastern and western clubs can be huge at times.

That would make 36 games for next season and then 38 whenever the 20th club is added to the set up. Then you have US Open/Voyageurs Cup games and possible CONCACAF Champions League.

There is no doubting that it is a busy schedule, but as much as teams complain, they always seem to find the time to play those “glamour” friendlies. International dates are also not leading to free weekends, with midweek games having to be squeezed in to compensate, as happens elsewhere in the world.

It is a lot of games, but not when you look at what is played elsewhere. I’m used to watching East Fife play 36 league games a season, with the possibility of four more games in the playoffs and three Cup competitions. The travel is so much shorter of course, but that’s countered by the fact that all the players are part time and have regular jobs.

MLS has that busy extra month of playoff games to add into the mix and that’s what the killer in all of this is and the continued emphasis on the playoffs is one of the driving forces behind tinkering with the schedule again.

I know it’s the American way. Playoffs are exciting, but if you want to keep adding over half of your competing teams into them, then the regular season doesn’t really matter a jot.

The alternative is more games against Western rivals, with more Cascadian derbies.

I do see the appeal. So must MLS, who will be licking their lips at the prospect of more passionate full houses. Makes for a good televisual presentation to show the League in the best light.

For clubs, the reduction in costs, travel time and fatigue would be immense.

For fans, we have the opportunity to see more games we care about. Outside the regular fanbase, who gets excited when Columbus come a calling? The chance to see more of the strongest teams in MLS is a lot more appealing and an easier sell for the front office.

It also gives fans the chance to travel to a number of away games, without breaking the bank too much and needing too much of your hard earned vacation time. And away games are a huge part of making this league successful. There’s nothing better as far as I’m concerned and once away travel in numbers is commonplace in MLS, then we have a grip on the nation.

You cannot devalue the occasions of local derbies though.

Large numbers made the cross border trips up and down the I5 for the Cascadia Cup games. Supporters in all three cities loved the occasions.
Would we really take 500 people down to Seattle and Portland each time if we played there twice or more per season?

Scottish football can be a dearth of entertainment at times and a large part of that is ten and twelve team divisions where clubs play each other four times a season, and often more depending on the three Cup draws and possibly replays.

I’ve seen East Fife play teams seven and eight times in a season. It gets boring and stops people going, and it’s certainly not what’s going to switch people onto watching the game here.

Reducing the number of cross conference games also deprives fans across the country of ever seeing some of the League’s best players (which is something that Vancouver fans can certainly relate to last season, for other reasons).

As much as I shake my head at people turning up at games just to see an individual player like Beckham, how can you say Chicago fans can see him play but Columbus ones can’t as an example. How does that grow any interest in MLS from the casuals whatsoever?

And why does one eastern team get a difficult game against LA and another doesn’t. That could be the decider for the playoff places at the end of the season.

From purely selfish reasons, more regionalization also hurts the Whitecaps chance of making the playoffs. We have a lot stronger opposition to overcome in the West to get there.

Can there be a happy medium? Football fans are notoriously a difficult bunch to please.

No decision will be set in the stone, but with the growth the League has had in recent years, it is a huge one to make and needs to be made for the right reasons. They also can’t chop and change the set up every season if they want to keep any respect.

Let’s hope that MLS don’t take a step back from making the wrong decision. For if they do, it may be a hard move to recover from.