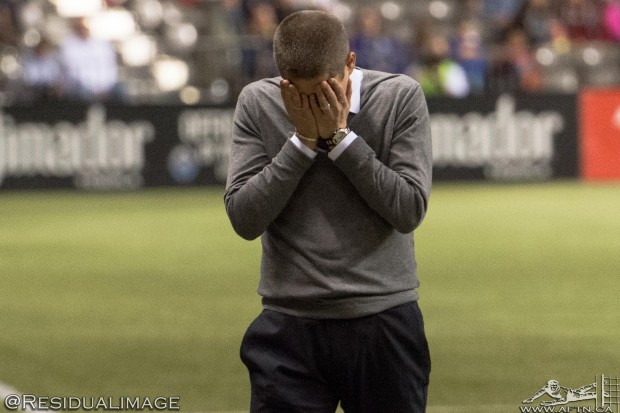 One could be forgiven if you weren’t quite sure what to make of the Whitecaps so far this season.

Two weeks ago, fans were eyeing up possible points to keep them at the top of the Supporters’ Shield race. A solid throttling of a lowly Philadelphia Union team, and with some good road results in the rear view mirror, and it wasn’t unreasonable to put the Whitecaps in the conversation for Western Conference contenders.

Now, a couple underwhelming performances against NASL underdogs in Edmonton, with a humbling home loss to a professional Seattle Sounders outfit, and you can sense some reservation around the club.

You could really look at it either way you wish. You could point to a strong defensive record and the fact that the Whitecaps still remain second in the very strong Western Conference or you could start to worry that the Whitecaps have scored one goal from open play in all competitions since the second minute of the home match versus DC United almost a month ago.

Despite plenty of possession and opportunity, the Whitecaps couldn’t get a sniff against a bunkering Seattle Sounders squad who scored an early away goal, and had their hands full against an FC Edmonton team that really shouldn’t have posed as much of a problem as they did. An early penalty and a late and sloppy set piece goal ended up being the difference, but recent results have left many questions to be answered in the next set of matches.

Pedro Morales continues to be a conundrum. With the wind in his sails, there are few who can spread the ball around and find players in space like the Chilean, but far too often he’s looked frustrated, or even worse, lazy.

Morales now has a season and a third under his belt, and no longer has excuses of settling into the league or not having a proper offseason. While his range of passing is still on display, Pedro has yet to show he can consistently break down defences who pack the middle of the field in front of their own box.

Morales hasn’t been getting a lot of help either. Rosales has been battling injuries all season, and while Teibert and Laba have been excellent at regaining and maintaining possession, neither have shown they will ever be a threat to thread the final pass.

Another question mark is if Kekuta Manneh can make the step from electric super sub to a contributing every day starter. His lack of defensive prowess combined with his inconsistent decision-making ability has meant that the Whitecaps are still looking for a wide attacker who can pull defences out of their shell.

Enter Cristian Techera, who has now had enough minutes to have at least an early indication of his ability, and at least showed in Edmonton he’s clearly bright, technical and tricky enough to create a fuss for defenders, but it’s still early days and Techera needs to put together more positive performances to solidify a starting spot.

And other than Octavio Rivero, who continues to provide excellent efforts despite having a serious lack of service, the strikeforce behind him has been sputtering.

For every stretch of games that Mattocks does well and earns himself more minutes, he then takes a step back, as was seen versus Edmonton in which he did very little to suggest he could be relied upon. It remains curious that an experienced and talented Robert Earnshaw continues to be well down the pecking order of strikers despite his history as a goal scorer.

A Dropoff In Defence

While the first choice defensive set up for the Whitecaps has been generally excellent, some question marks, however, seem to have a clear picture forming.

Lance Laing may be one of FC Edmonton’s best players, but Ethen Sampson was consistently overrun by the Eddie’s wide player until in an almost poetic metaphor for his performance, Sampson was beaten wide by Laing, slid into a reckless and late tackle, earning a yellow and a bloody face in the process, ending his evening. Despite Sampson showing well in a few moments last season with Beitashour out, it’s now becoming clear that Sampson is not developing into a serviceable backup and looks more like a liability every time he’s put on the pitch.

Sampson’s opposite fullback on Wednesday versus Edmonton was Christian Dean who didn’t fare any better. Poor passing, sloppy tackles, and even a foul throw is what stuck in the memory after Dean’s most recent foray at left back. At least in Dean’s case he has an explanation, as he was playing out of position from his preferred centre back spot. Either way, Dean has failed to show that he’s deserving of more minutes, especially as rookie Tim Parker has acclimatized quite well.

The silver lining in all of the hiccups in depth at the back is that Parker has played admirably either in the middle of defence or as a right back and looks to have usurped Dean and Sampson as the preferred depth option.

At the beginning of the year it was unclear if the Whitecaps would keep moving forward with the 4-2-3-1 formation from last season, or if there would be a switch to a single defensive midfielder system or even a two striker setup.

Now, I’m not one to get too tied up with formation. In modern football, and with Carl Robinson, the formation seems to just be some numbers. Players are free to move and interchange in attack, and playing with players like Manneh and Techera mean you essentially just have wide forwards who are welcome to tuck in to the middle if there is room to exploit.

However, it seems that the book has been written on the Whitecaps, in that if you pack the middle of the pitch, no one is able to unlock two banks of defenders.

The results the Whitecaps have gotten are more down to staunch team defending, with a special focus on two good holding midfielders, a physically dominant centre back, and one of the MLS’ best keepers, but down a goal against Seattle, the game was begging for a switch to a single holding midfielder in Laba and instead of bringing in a physical destroyer in Koffie, more of an eye to a final ball playing midfielder in Mezquida or a striker like Earnshaw who’s movement alone could create space.

It may cost the Whitecaps in their defensive ability on the counter, but Laba has shown an ability in the past as a single holding midfielder, and in the end if you’re chasing a game, you can’t get results if you can’t score goals.

There’s still a lot of time to turn things around and the Whitecaps are, for now, still sitting near the top of the table. Perhaps the biggest question posed in all of this is do the Whitecaps have the ability to do that and stay there?