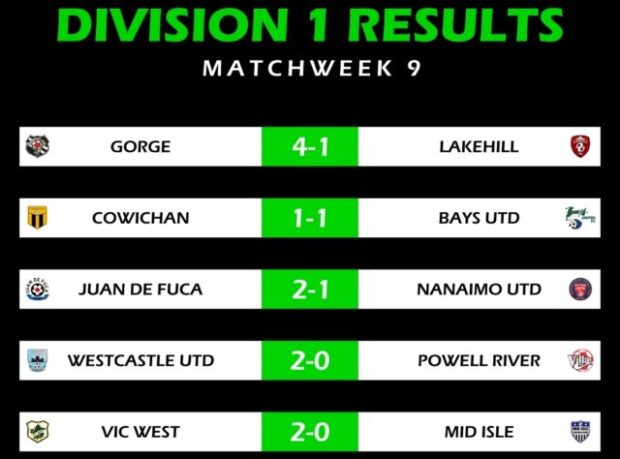 Week 9 is complete, and the midway point of the 2019/20 Vancouver Island Soccer League (VISL) season has been reached.

This past weekend might have produced the oddest of situations seen in the Island League’s top flight. Look at these results and how the standings look, and you will see that there is a four way tie at the top, with the division’s only unbeaten team, Gorge FC, sitting just one point back in fifth. It’s quite the logjam.

Here is what contributed to the crazy year at this point.

Friday night had the Game of the Week as Gorge defeated Lakehill 4-1. The undefeated Gorge team had goals from Lorik Maksuti, Dominic Colantonio, Nils Webber, and Edward Lawson, while the lone Lakehill marker was scored by Paulo Dait from the penalty spot. Game MVP was Gorge midfielder Eddie Lawson.

Friday also saw a tilt between the teams placed 2nd and 3rd going into the weekend. Cowichan and Bays Utd battled to a 1-1 draw. Patrick Nelson was on the scoresheet for Bay, while Cowichan’s goal came from Kevan Brown.

Saturday was a busy one and it started with Juan de Fuca slipping by Nanaimo via a 2-1 scoreline. JDF goals came via Devon Austin and Kane Johnson, while replying for Nanaimo was Caleb Nwameme.

The second game on Saturday had Westhills blank Powell River by the score of 2-0. Sean Young and Stuart Klenner grabbed Westcastle’s goals, while earning the shutout was Sachdev Grewal.

Wrapping things up on Saturday was Vic West’s 2-0 win over Mid Isle. Riley O’Neil and Sean Prizeman had a goal each for the Greens. Providing the clean sheet for Vic West was Ben Chamberlain.

So after these five games were entered, here is what the standings look like. Take note of the four way tie for 1st place! 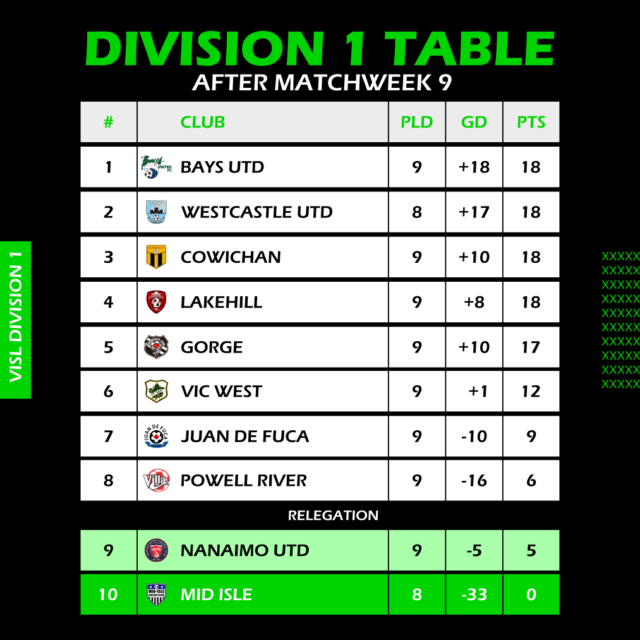 So a lot of drama, but another quiet weekend for goals. There was a change in the Golden Boot leaderboard, however, and here is how it looks now. 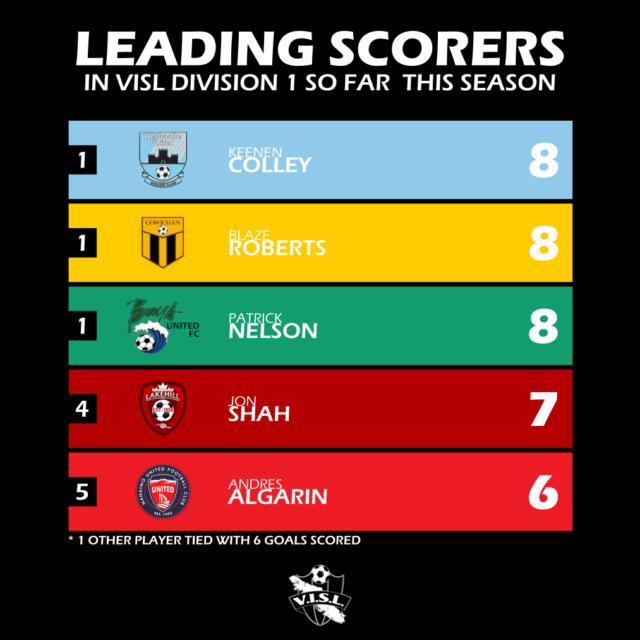 A special event took place on Remembrance Day itself – the McGavin Cup Final. This was contested by Gorge FC and Juan de Fuca – both Division 1 teams. It was a close affair and the lone goal was scored by Gorge’s Eddie Lawson. Posting the shutout was keeper Marvin Josue Dubon. Earning MVP honors for the Gorge was Brennen McCleary. Earning MVP honors for JDF, and the player also selected as overall game MVP – Blake Ridley.

As we officially start the second half of the season, it is clear that this weekend might be the biggest of weekends to this point.

The Island Soccer League’s top flight has not been this close in many many years, and all five games this weekend are biggies. Here is what is in store.

Friday night is a busy one, and it starts off with a bang as the Game Of The Week has Cowichan FC hosting Westcastle. The two teams are in 3rd and 2nd place, with Westcastle having one game in hand. The game on Keserich Grass field will be so big for both teams and the VISL will have a crew fieldside to tweet out live updates (via @vincenzo25 on Twitter).

Friday night will also feature undefeated Gorge FC hosting Mid Isle at Hampton Turf. Fresh off their McGavin Cup championship, Gorge will be looking for three points to keep pace with the top four. Mid Isle will be looking to get themselves their first points of the season.

The final game on Friday night will also feature two of the top four teams as Division leaders Bays Utd will look to take out Lakehill again, but rest assured the Reds will be ready for their rivals a municipality away. Lakehill will look to respond after last weeks loss to Gorge, and pay back Bays for the opening season loss to the squad from Oak Bay.

Saturday will be a battle between the two promoted teams from Division 2 last year, with Juan de Fuca hosting Powell River at Westhills Stadium at 6 pm. They drew each other 1-1 in the first game of the year in Powell River, and both teams will look to squirrel away these huge points.

Saturday will close out with a couple teams that have been snake bitten this year with some type of misfortune as Vic West host Nanaimo at Finlayson Turf at 6 pm as well. Both teams have been competitive and in most of their matches, but just fallen short. 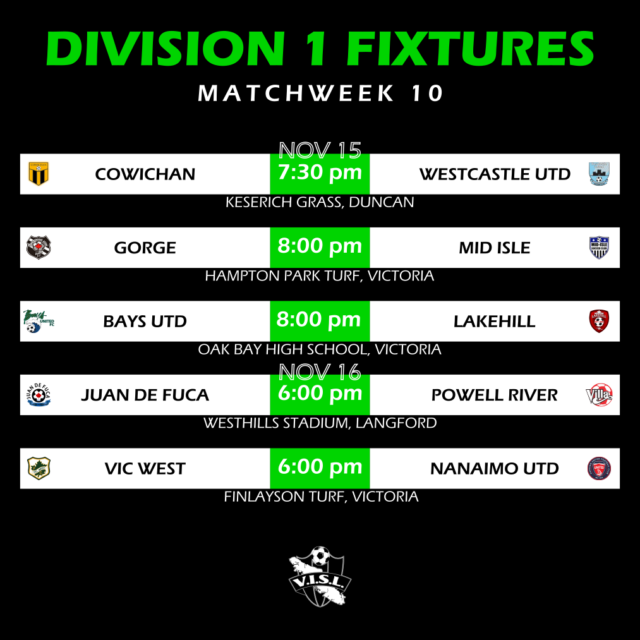