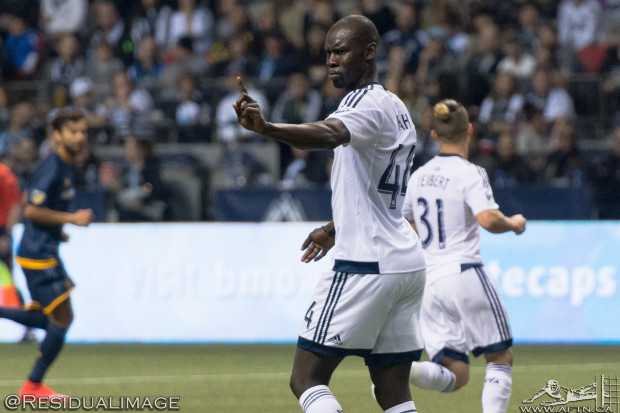 Pa-Modou Kah has been a much maligned figure in certain quarters this season. It’s been a little unfair on the veteran, who has been a very solid and key figure in Vancouver Whitecaps league-leading seven clean sheets so far this year.

But he has also made some mistakes. They’ve not always been punished, but they’ve certainly been noticeable.

Part of the criticism will always stem from the fact that he is seen to have replaced fan favourite Andy O’Brien. Another part though is that when Kah does make mistakes on the field, they don’t tend to be slight mishaps but are more of the “argh, what did he do that for?” resulting in panic stations variety!

He’s flawed, but he’s also a leader on and off the field. A calming and experienced head in the locker room, the joker of the team, and a real joy to actually sit down and talk to about the game.

For ‘Caps coach Carl Robinson, the 34-year-old has been all he’d hope for when he signed him in the offseason.

“He’s very important to me because you see what he brings to the table,” Robinson told us about Kah’s play so far this season when we spoke to him last week. “He’s brings leadership. He’s an experienced head but with all players, sometimes they make mistakes and they get highlighted more than others.

“I assume, and this is just me thinking, that by Gary [Kingston of the Vancouver Sun] not asking me about him for the last month he must have done very well! So I’ll take it by that really!”

But what of those mistakes? Robinson is naturally concerned by any player making mistakes in his team, but in Kah’s case, he doesn’t see it as that big a deal right now.

“I know all my players make mistakes. It’s important when they do that I stick by them and I support them. In Pa’s scenario, there isn’t a defender in this league that doesn’t make a mistake. We joke about it.

“A mistake by him is maybe giving a ten yard pass to a centre forward who’s maybe the last line of our defence, which is maybe not a very good thing to do. But other defensive mistakes are not picking up in the box. He does that very well and it’s easy to magnify the things that players don’t do. I think confidence is a big thing for him.” 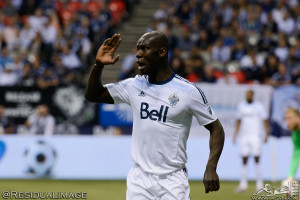 When Robinson brought Kah into the squad in January, he likely didn’t foresee him playing as much as he actually has, especially with adding fellow centre back Diego Rodriguez at the same time.

Kah was dominant in the preseason, however, heading home a couple of goals and establishing himself as the clear number one defensive partner for Kendall Waston for the first few games of this campaign.

You did get the impression though that it was just a temporary fill until Rodriguez found his feet in a new league and new environment. When the Uruguayan got his first start in the week three win over Orlando, it was likely that he was going to keep that starting spot going forward.

But then came his subsequent suspension for some ball grabbing. Then when he did return three games later against Columbus, Rodriguez went down to an injury. It was a tough start to the Uruguayan’s MLS career, but it gave the opportunity for Kah to show his importance to the ‘Caps and reward Robinson’s faith in bringing him into the squad.

Having played in 15 of the Whitecaps 18 MLS matches this year, the veteran finds himself as the joint third highest player on the team in term of appearances. Back in February, Kah probably didn’t foresee himself playing as much as he has either, 1335 minutes and counting, but he’s relishing every minute of it.

“I always hope I can play every game,” Kah told AFTN. “For me, it doesn’t matter. I love competition. I’m not happy that Diego was injured because you never wish somebody injury, but for me I just have to take my chances.

“I’ve been pleased but I know me and Kendall can improve even better in the backline with Jordan and Beita and David. So far it’s been good but we know we can be even better.”

For all the criticism aimed at the veteran, Kah has been in the backline for six of the Whitecaps seven clean sheets to date. That is not purely a lucky coincidence.

He has established a great understanding with Waston, but for the first time this season, Kah will take to the field without his central defensive partner against New England on Saturday, with the Costa Rican missing out through suspension for yellow card accumulation.

Changing a settled backline is never what you want, but for Kah it’s something he’s got very used to over his 18 year pro career to date.

“For me it’s alright because the past two years in Portland I had to deal with different centre backs playing with me and that is also part of the game,” Kah told us. “But we have Timmy Parker, who’s been playing really good in the games, we’ve got Christian Dean. We have other people who can step up, so for these guys it’s also an opportunity for them to step up and do well.”

It’s looking likely that it will be Parker that gets the nod, and his pace and fast feet will make for an intriguing and likely effective combination with Kah.

And if Waston hadn’t picked up that late booking against New York last Saturday, it may have been Kah sitting out this game. As it is, Robinson needs his experienced head in the line-up and marshalling the back line.

“I would have considered [resting Kah v New England] without a doubt and I will consider it over the next month or two,” Robinson said this week. “I look at combinations too. Kendall’s out, so either Diego or Timmy or Christian’s going to have to step in. They’re all young players, so with young players sometimes you need an older head, an experienced head to guide them and help them.

“Pa will play on Saturday based upon whether it’s Timmy, Diego or Christian that’s going to step in. I’ve got to be fair to the young players as well and give them the best possible opportunity for success and I feel that doing that is playing them next to Pa. If Kendall was available then maybe there would have been a possibility that I play Kendall and Diego, but he’s suspended so that goes out of the equation. I’m sure Pa will be suspended at some stage, so he’ll get his opportunity to rest then.”

Whatever the pairing, there’s a lot of confidence in the Whitecaps defence this year.

With seven clean sheets already in the books already, and with nine fewer goals conceded than at this stage last year, Vancouver’s defence has been a key factor in the team’s position at the top of the standings.

Last Saturday’s win was the start of the second half of the season, and, as always, it’s not how you start but how you finish. Right now though, Kah is feeling pretty content with how the season has gone to date.

“This first half of the season, we’ve been doing good but we can do ever better because of the quality we have in the team,” Kah told us. “We’re still in second place, fighting for the first place. 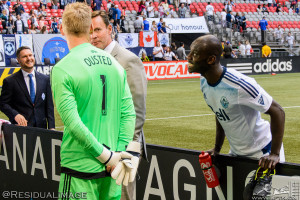 Kah clearly enjoys being part of this Vancouver squad. He may look strict and stern at times on the pitch, but he’s one the jokers of the team, with a pretty good, and sometimes, dry, sense of humour.

He’s also played a key mentoring role with his fellow Gambian Kekuta Manneh, taking over another role from O’Brien last season, and been sharing his knowledge and experience with all the centre backs at the club right now.

He likes being around the team and this week the close-knit squad got a chance to bond further when they stayed out east for the week following last weekend’s win at New York. Training in Hoboken, doing some sightseeing and taking in some sporting events with the entire squad, it’s been fun and the right thing to do with the squad Kah feels.

“When you’ve got a chance to make a trip to the east coast, and New York and Boston, and do it in one trip, it’s the best because of the flying distance,” Kah told us. “You don’t need to come back home, stay a couple of days and then go back again and try and acclimatize to the eastern now.

“Now, we stay the whole week there and for the team it’s good. The boys are together, for sure we’re going to miss our families, but for the team chemistry and these trips that are coming along, it’s very helpful.”

Kah’s been around a lot of club and in a lot of countries over the years, eight of the former, seven of the latter. With two seasons spent in MLS with Portland, he knows what it takes to make a successful team in this league. So just where does he place this current Whitecaps squad in that and just how good could this team be?

“Last year they made the playoffs against Dallas and lost on a very controversial call, if you ask me,” Kah added. “This year we are progressing but it’s still a long way to go. In this league, it’s not where you start, it’s where you end. You have to maintain an even keel and make sure we get into the playoffs.

“This year it’s a six team race and when you see the Western Conference there’s not many points from the bottom to the top so this is just about continuing these next 16 games, make sure we get into the playoffs, get a nice flow and who knows?”

Who knows indeed? But so far, it’s looking pretty good.