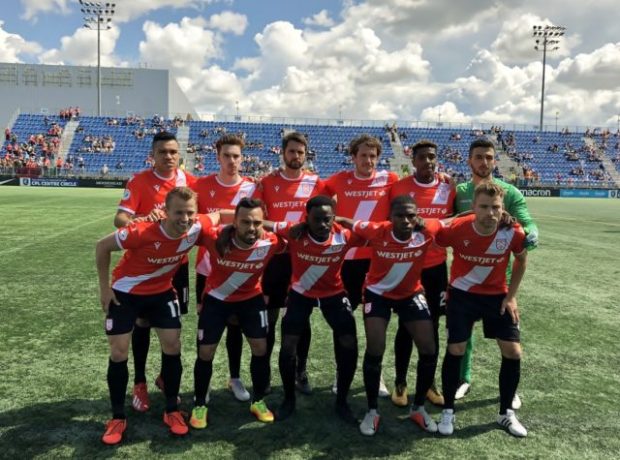 A trio of goals in an explosive 10-minute span during the second half propelled Cavalry FC to a 3-0 victory over FC Edmonton on June 15, in the second edition of the Al Classico derby.

Sergio Camargo scored a brace, with goals in the 68th and 73rd minutes, before Nico Pasquotti grabbed his second tally of the season a few minutes later to secure the three points for Cavalry and keep their unbeaten record intact.

Sluggish starts were an issue for Cavalry in the team’s recent Canadian Championship games against Forge, and it was the case once again against FC Edmonton. Playing at Edmonton’s Clarke Stadium, the home team looked the better side throughout the first 45 minutes, outshooting Cavalry 13-3 and controlling the lion’s share of possession.

In all fairness, the Eddies should have taken at least a one- or two-goal lead into the halftime break, but their inability to be clinical up front in the first half proved their eventual downfall.

Edmonton had the first real chance to score in the 13th minute, when James Marcelin forced a save from Cavalry goalkeeper Marco Carducci with a well-struck half volley from the edge of the 18-yard box.

The hosts had an even better chance to score on 33 minutes, which Oumar Diouck squandered. Cavalry turned over the ball on their left side of defence, and FC Edmonton’s players made a few clever one-touch passes to make their way into Cavalry’s 18-yard box. Diouck found himself with the ball just outside the six-yard box, but he held onto it for too long before releasing his shot, which allowed Cavalry center back Jonathan Wheeldon to put in a goal-saving block.

Cavalry’s poor start meant Tommy Wheeldon Jr. made some changes early. Rather than wait until the halftime break, he brought on center back Dominick Zator for midfielder Julian Buescher in the 35th minute, and Zator slotted in on the right side of defence. Wheeldon Jr. also pushed defender Joel Waterman into a central defensive midfield position, and switched his formation from a 4-2-3-1 to a 3-5-2, with Zator, Wheeldon and Mason Trafford manning the back line.

The changes paid dividends, as Cavalry looked a much better side as the second half got underway.

Camargo scored the game’s first goal in the 68h minute, collecting a short pass into the box from Dominique Malonga, taking one touch to set himself up, and then sliding a right-footed shot past Eddies goalkeeper Connor James.

Camargo’s goal opened the floodgates for Cavalry’s attack, and just five minutes later, he grabbed his second tally of the match.

FC Edmonton’s defenders failed to clear Cavalry’s long throw-in from the right, and the ball eventually fell to substitute Jordan Brown. The striker’s shot was blocked, but the ball squirted out to Camargo, who was open at the back post. The former Toronto FC II player confidently fired the loose ball home to double Cavalry’s lead.

AND WHY NOT ANOTHER

⏳15 minutes for the Eddies to bring it back.

Pasquotti sealed Cavalry’s victory with a well-taken goal in the 77th minute. The ever-energetic winger played a clever give-and-go with Brown, who did well to flick a back-heel into Pasquotti’s patch. The Lethbridge native fired his shot towards goal from inside the box. James made the initial save, but his rebound fell right in front of his goal line. Pasquotti, who followed up his initial shot, rolled the loose ball easily across the line.

FC Edmonton nearly scored a consolation goal in the 87th minute, with a long-range shot that appeared to be heading for the top-left corner. Carducci – who hadn’t had much to do in the second half – flew across his line full-stretch to get his finger-tips to the ball, and tip it off the crossbar.

At 3-0, the result marks Cavalry’s largest margin of victory this season, and their fourth clean sheet in the CPL. The win showed that once again, the CPL leaders were able to overcome a sluggish performance in the first-half to snatch a result.

For FC Edmonton, the loss to their provincial rivals continues a poor run of form in the CPL – their fourth defeat in a row, and their fourth game without a goal. After six games, the Eddies are at the bottom the league table with just four points. It’s been a particularly rough week for Jeff Paulus’ team, considering they crashed out of the Canadian Championship against York9 just a few days earlier.

For Cavalry, the result means they are still unbeaten after 10 games in all competitions, with nine wins and a draw. The CPL’s team to beat will look to keep their hot streak going against HFX Wanderers in Halifax on June 19, before returning to Cavalry for yet another battle with Forge FC at Spruce Meadows on June 22.

TOMMY WHEELDON JR. (on One Soccer)

Overall thoughts on the match:

“It’s a game of two halves, innit? Edmonton were the better team in the first half. We corrected it, had to make a change just before half and when Joel Waterman went into midfield, we started cutting off their lines and pressing them a little bit higher. Sergio Camargo, you’re starting to see why he’s one of our formational signings, because he scored in the last game, scored another couple in this one and could have had the first hat trick in the CPL.”

On Cavalry’s nervousness in the first half:

“I don’t think we were nervous, you have to credit FC Edmonton. They’re a good side, they’re just not clicking and getting the results. In games of football, in 90 minutes, sometimes you’re not going to be the better team. I think Edmonton were the better team [early on] and they need to get some credit for that. We were the better team from the 30th, 35th minute onwards. The result was probably a fair result.”

SERGIO CAMARGO (on One Soccer)

On Cavalry’s performance and his first goal:

“It was a counter-attack. Dom did really well to keep the ball until the last second, and he saw me at the end there. I was composed, and I feel that’s the difference between the start of my season and these last few games.

On the importance of patience for Cavalry:

“It looks like it’s really important, with all these goals in the second half. We have to start out better, though. We’re going to lose a game if we keep coming out that way. Patience is good, but at the same time, we need to come out as hungry as we are in the second half.”

JEFF PAULUS (On One Soccer)

“Delighted with the first half. We showed once again in small bits and pieces what we’re capable of, when the lads are into the game and playing the way we want them to play.

“We talk all the time about the need to have balance, even in attack. We need to still make sure we take care of our defensive responsibilities. [On Cavalry’s goals] both of our central midfielders were pressed high as we were going towards goal. It came off their legs, it’s in behind them and now [Cavalry] have space to run. And they have good footballers. They punished us on the counter attack.

“What’s most disappointing though, after they scored that goal, what you want to see is a reaction from your team. And we went the other way – we lost our heads and played school-boy football. The marking was soft. It’s frustrating, because once again, we wasted a good 45 minutes.”

“We were playing well and had a bit of belief. I’m so disappointed with the way we reacted to their first goal, because everything fell apart. We lost our shape and lost our ability to play. We looked nothing like the team that played in the first half. At this level of game, you’re going to get punished.”