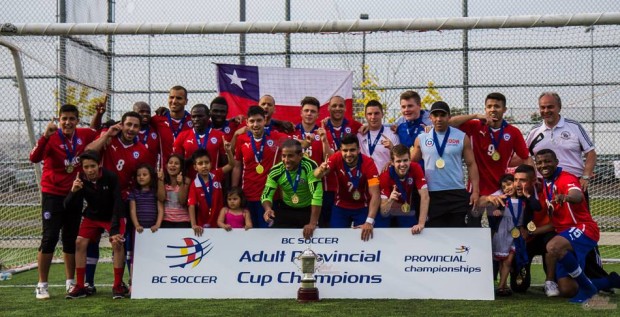 Another year of BC Soccer Provincial Cup action wrapped up on the Willoughby Turf in Langley on Sunday, and once again VMSL sides were dominant, with a clean sweep of all four finals.

Estrella de Chile Burnaby won the A Cup, Guildford FC the B Cup, West Van FC the U21 title and Westside took home the Masters crown.

The A Cup was assured a first time winner in a final contested by two VMSL sides – Inter FC and EDC Burnaby – with a spot at the Nationals in Calgary in October on the line.

Inter finished 4th in the VMSL this season, with EDC finishing 8th and qualifying for the Provincials on the back of being losing finalists in the Imperial Cup in March.

It was Inter who made the early running having their first chance within the first 30 seconds of the match. They kept the pressure on and forced EDC keeper Hugo Alberto Vasquez into two big saves between the fifth and the sixth minutes, first from Sebastian Crema at his near post and then from Jordan Michael.

It was all Inter and they should have taken the lead ten minutes in when an unmarked Liam Miller got on the end of a Crema cross at the back post but completely miscued his shot.

Vasquez was called into action again in the 16th minute when he save a deflected shot from Michael, but with the ball still lose the Chile ‘keeper was clattered from Adriano Clemente and needed to receive four minutes of treatment after being winded when he crashed to the turf.

EDC had been under the cosh but took the lead against the run of play with a fine example of route one football in the 24th minute. Vasquez kicked long down the field to Mohammed Habib, who controlled the ball well after an awkward bounce, and shook off the attentions of three inter defenders to volley the ball home past Andrew Fink for the opener.

As Inter tried to find the equaliser, Habib had a chance to make it two in the 32nd minute when he got on the end of a Ylya Malek cross but fired wildly over when free at the back post.

Brendan Djambazov fired over from the edge of the box for Burnaby with the last kick of the half as Inter had to go in disappointment that their dominance of the play had reaped no reward and they were a goal down.

Habib thought he’d made it two for the Burnaby side five minutes after the break, but the goal was called back for a foul on Bryan Fong.

Inter pushed hard for the equaliser, dominating the game and having several chances. They finally got the breakthrough with eight minutes of the match remaining when they won a penalty and Joseph Marrello coolly slotted home, sending Vasquez the wrong way, to tie things up and send the match into extra time.

It looked like Inter would go on and win the trophy but they were shocked in extra time by EDC, with a little help from the referee.

Just a minute into extra-time Fong was adjudged to have held back Habib in the box and the referee pointed to the spot. It was a horrendous decision and Inter’s Tino Cucca was sent off for dissent.

Habib stepped up to fire EDC’s, and his own, second of the game to send the Burnaby side on their way to their first provincial title.

Habib himself was luck to stay on the part nine minutes later, crashing very late into Inter keeper Fink, but the referee only booked the striker, raising the Inter ire even further.

Habib nearly grabbed his hat-trick on the stroke of half time of extra time, seeing his shot head off the line by Andre Herath.

Inter tried to push for the goal that would take the game to penalties but their hopes were all but ended with seven minutes remaining when Colin Streckmann was sent off for a tackle on Rizal Ganief.

But EDC were to be reduced to ten men four minutes later when Espindola saw red for a second bookable offence.

Ganief made certain of the win and the trophy when he added a third in the dying seconds, to ensure Estrella de Chile lifted their first Provincial Cup with a 3-1 victory. 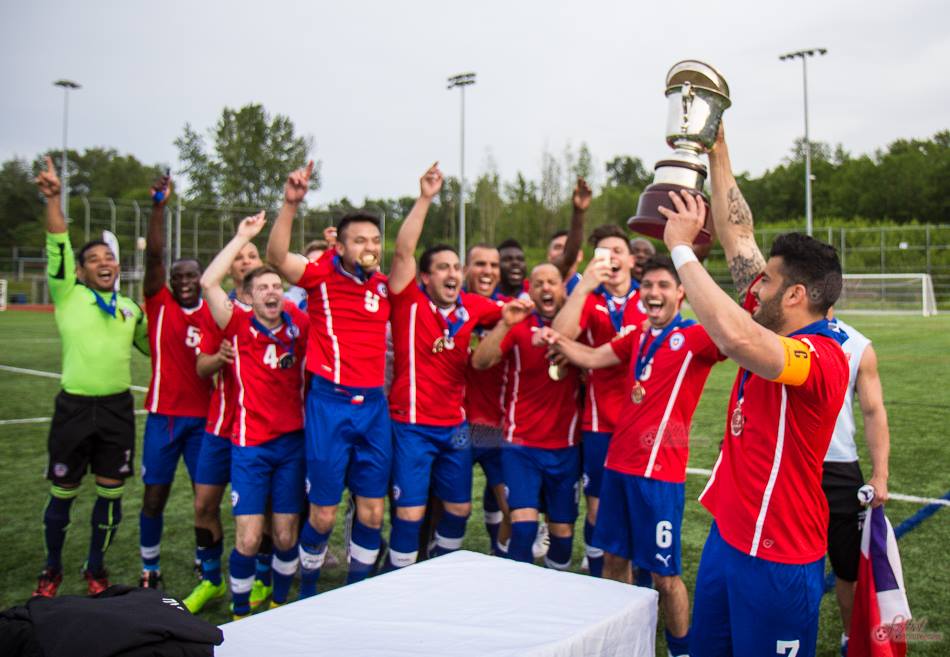 Guildford FC completed a fantastic season and secured the treble, adding the Keith Millar Cup (the B Cup) to their VMSL Division 2a and Division 2 Cup title. They dominated their match against VISL side Port Alberni, running out easy 3-0 winners.

Westside FC saw off Croatia FC 2-1 in the all-VMSL Masters final, and West Van FC beat Surrey United 2-1 in the U21 final.

So that’s the Provincial Cup over for another season. We hope you’ve enjoyed our coverage. We’ll be back again next year!