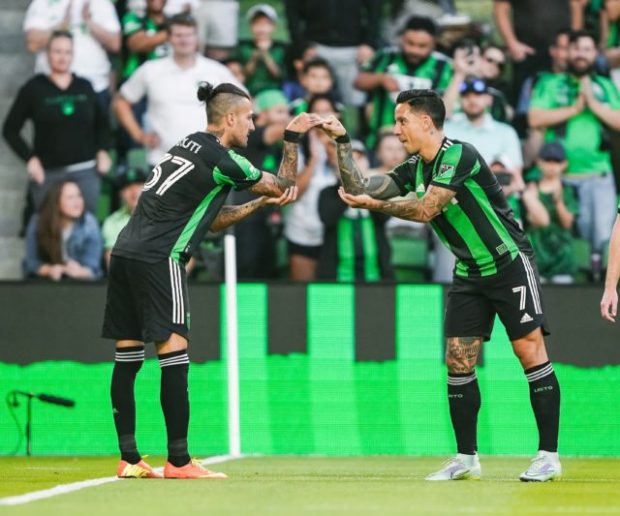 They say things are bigger in Texas. I don’t know if that is true, but Vanni Sartini’s Whitecaps’ woes certainly got a bit bigger as his side went down to a 3-0 loss at Austin FC on Saturday evening that rooted them to the foot of the Western Conference standings by the time the night was over.

Two first half goals from the ‘Caps nemesis Maxi Urruti and a second half clincher from Sebastian Driussi did the damage for Austin, who scored on three of their four shots on target. The Whitecaps on the other hand were only able to muster one shot on goal in another disappointing offensive output. They never stood a chance of getting anything from this game with those kind of stats.

It would be easy to blame Vancouver’s troubles on their missing starters, of which there appears to be a growing number. But their current plight goes much deeper than that, with the depth coming in not being up to the task, and even a tweaked formation, whether you call it 3-5-2 or 3-1-4-2, was unable to spark a turnaround in their fortunes.

It was a fairly even opening 10 minutes, and if anything the Whitecaps just edged being the better side. All they had to show for it though was a Brian White header off a Ryan Raposo cross six minutes in that went straight into the arms of Brad Stuver without much power. That was their one effort on target and it was all downhill after that.

By the 11th minute, they were one down.

Jon Gallagher forced a turnover from Marcus Godhinho and the ball came to a wide open Driussi who ran in unchallenged on goal as the Whitecaps centrebacks backed off, playing the ball to Urruti, who blasted the ball past Thomas Hasal for the opener. It was a strong shot but the ‘Caps keeper should have done a lot better with it.

It already felt a long way back for the ‘Caps early on. Not the first time we’ve said that this season and it likely won’t be the last.

Driussi had a volley saved by Hasal four minutes later, as Austin looked for a quick second, and although Vancouver steadied the ship, the home side doubled their advantage in the 26th minute, and who else would it be but the ‘Cap killer Urruti.

The Argentine was played in on the edge of the box, took a touch, a turn, and buried it past Hasal. Clinical stuff.

It was going to take something spectacular now for Vancouver to get anything from this game and Sartini tried to spark something, anything, by making a triple change at the half. One of those subs, Cristian Dajome, almost made an immediate impact 20 seconds after the restart after Cavallini played him in, but the Colombian curled his shot away from the goal.

A goal that early in the half could have been a game changer, but there lies the beauty of football and the slim margins that can turn games, seasons.

If the Whitecaps did have some faint hopes of getting back into the match, not that Austin were doing much themselves but then again they didn’t have to by this point, they were finally snuffed out in the 68th minute when Austin grabbed their third, and from a Whitecaps perspective, it was another woeful one to give up.

Nick Lima’s long throw into the box was met by Julio Cascante, who managed to rise between two ‘Caps to flick it on to Driussi, who had run totally unchecked, to head home unmarked from six yards out.

The fortress is in full effect. pic.twitter.com/TxITPa2dbl

There was simply nothing coming back from Vancouver and Cavallini was lucky to avoid getting a red card for swinging an elbow in a challenge with Daniel Pereira, picking up a yellow instead, even after a video review. If DisCo were to look at this again during the week, I wouldn’t be surprised.

Urruti came close to grabbing his hat-trick with nine minutes remaining, but he curled a low one wide and that was all she wrote, thankfully, in this one.

It was another dire performance from the Whitecaps and with San Jose picking up a huge win at home to Seattle, a defeat that saw them slump to the foot of the Western Conference standings, eight points back of the playoff line just eight games in and with the worse goal difference in the entire league.

You want to try and find some positives from every loss, but aside from WFC2 call up Ali Ahmed making his debut and giving a good account of himself, there was nothing here. At least they now don’t have a game next week, so there’s two weeks to work on stuff before they have three MLS home games in a row. These are now huge as you feel anything less than nine points from them won’t be enough.

“Overall thoughts is that it’s not enough. It was clear today that we have to, I would say, mainly up the quality of our game in every part because we’ve been very naive. We gave away the first two goals, I have to be honest in a way that is again, it’s impossible to come back. We made adjustments, actually in the first half. We had big chances to make it 2-1 at the beginning of the second half to reopen the game. Again the quality gets really bad there again. In the second half, we did better. We also at the end, didn’t have many shots, then we conceded a goal. On a throw in, something that we wanted to work on during the week because we know they had Lima that played the long throw in. So I would say that it’s a very bad night. The only positive note I would say is the fact that a young kid from our academy, Ali Ahmed, got his first game in MLS and so even if the night was very bad, I’m really happy for him and I congratulate him because it’s going to be the first one of a very good career.”

On the goals conceded:

“I think you’re right. In the sense that we weren’t aggressive enough to win the duel. We are actually good, pretty good sometimes in creating numerical superiority, pressing with the right time. And then we go there and we lose the one on one, when we have someone next to us that runs with the ball in the second goal, we let him run for 50 yards. I don’t know why. That has been an enormous issue. It’s hard to win games if you’re not winning those duels even when we press well.”

“We go in with the fact that we now have got three games in a row at home now for the league, and then the Canadian Cup. We need to start winning games. We need to change everything in the sense of quality of the work, we need to get out of our comfort zone. We need to get out of the fact that we need to reevaluate everything, from the depth chart, even the way of playing that this year, it’s not working. We’re trying to be aggressive but it’s too easy to beat the pressure. So we need to reevaluate everything because trying to do the same thing, then things are not going well expecting different results, it would be naive. So we need to change pace and change pages and focus on these games that we have at home. I would say luckily we have a bye next week. So we can have two weeks of working, working, working, working and then go with a game against Toronto and go on from there.”

On his MLS debut:

“Very special, very special. It would have been 10 times sweeter with a W, but I’m still going to enjoy it for sure. This is a big blessing. These are the moments you dream of, what you think of when you’re putting the hours in, the effort you put in every hour. You know, these are the moments you think of and like I said, living this thing, I can’t even describe it to be honest.”

On what was learned:

“It’s definitely a quicker pace, everything sharp and everything quick, you can’t stay still, do not expect the game to come easy. Maybe it’s my first game but it was definitely sharp. Everything was sharp and intense and hopefully many more to learn though.”

“It’s about looking at each other, looking at ourselves in the mirror, and really being honest. It’s clear it hasn’t been good enough, since the start of the season. We’ve been conceding goals very easily. We’ve been second to a lot of balls. It’s obvious why we’re dropping games, but in MLS, there’s always a chance, there’s always the next game. And our next four games are at home. So it’s an opportunity for us to re-write the start to the season and change now.”

On the team’s aggressiveness:

“It’s about belief, when you’re winning games, when things are going your way, your mentality is strong. We have a young group, so you know, mentality is going to fluctuate with wins and losses, confidence goes down and confidence goes up. It’s the part of having a young group, but what’s important is that we don’t stop working, when we’re at home and we’re training throughout the week. We have to make sure we bring the intensity every single day and you can’t take days off because then it shows in the match on the weekend. There’s only one way to go now and that’s to look at ourselves and then get back to work.”