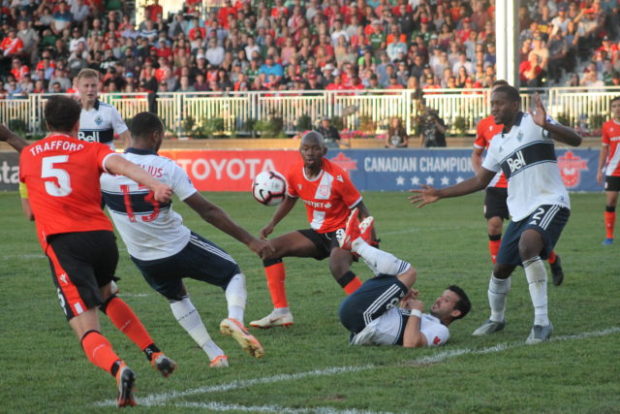 There’s still 90 minutes left to play, but Cavalry FC’s toughest challenge yet of their inaugural season is off to a positive start – the Canadian Premier League team held Vancouver Whitecaps to a goalless draw at Spruce Meadows on July 10, in the first leg of their third-round Canadian Championship tie.

In an intriguing contest that included chances and momentum swings for both teams, the clean sheet will be a boon for Cavalry when the two teams face each other again in two weeks.

With Vancouver coming off a 6-1 defeat to Los Angeles FC on the weekend – their worst loss of the season – Whitecaps head coach Marc Dos Santos made clear in the lead-up to the MLS team’s first Canadian Championship fixture that he would not take the CPL spring season champs lightly.

That much was evident with the Whitecaps’ starting 11, which included heavy hitters like Ali Adnan on the left wing and Fredy Montero up front. Yordy Reyna also started, as well as a crop of other MLS regulars. 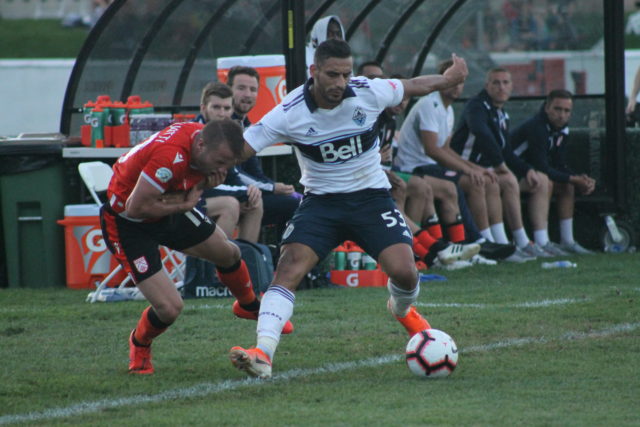 On the other side of the pitch, Cavalry obviously put out their strongest 11 as well, setting up in the 3-4-3 formation they utilized so successfully during the CPL’s inaugural spring season. Playing with a back-three demonstrated Cavalry’s intentions of “going for it” instead of sitting back against the MLS side.

Regardless of the big names they were up against, it was Cavalry who started well, generating the first chance of the game on seven minutes. Midfielder Julian Büscher intercepted a ‘Caps turnover and fed a pass to right-winger Nico Pasquotti, who dribbled his way into the Whitecaps’ box before unleashing a shot from a tight angle, which Whitecaps keeper Maxime Crépeau comfortably saved.

It didn’t take long after that, however, for Vancouver to settle into a comfortable rhythm, controlling the ball and switching the play. But despite enjoying 65 per cent of possession in the first half, their ability to create scoring chances once getting the ball into the final third was lacking – of the ‘Caps’ four shots in the first half, only one came from inside the 18.

As far as excitement went, there wasn’t too much to say about the cagey first 45 minutes. The game was, more or less, proceeding as was expected.

Fortunately for fans, that all changed in a pulsating second half that saw both teams threaten on multiple occasions.

Vancouver thought they scored just a few minutes into the second half, when Adnan and Montero connected to put the ball into the net, but the play was flagged for offside.

Reyna then tested Cavalry ‘keeper Marco Carducci with a low, left-footed shot towards the bottom right corner in the 59th minute, but the former Whitecap managed to get across his line quickly enough to punch the ball out for a corner. 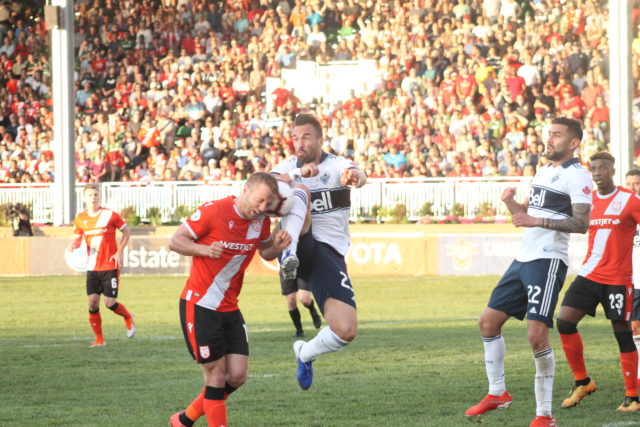 Cavalry had a penalty shout when Pasquotti collided with Scott Sutter in the 69th minute. (Photo: Scott Strasser/AFTN)

Ten minutes later, Pasquotti had a penalty shout when Whitecaps fullback Scott Sutter clattered into him while trying to clear the ball. Despite Cavalry fans baying for blood from behind the net, the referee consulted with his lineman and decided against giving the spot kick.

Spurred on by the 5,000-plus fans in attendance – the highest attendance yet at a Cavalry game – the home team poured attacks forward, resulting in a flurry of scoring chances in the final 10 minutes.

On 84 minutes, centre back Dominick Zator rose to head a corner kick from José Escalante, but his powerful header flew just wide. Further chances then fell to Pasquotti, who was having another relentlessly energetic performance on the right wing, in the 86th and 87th minutes. 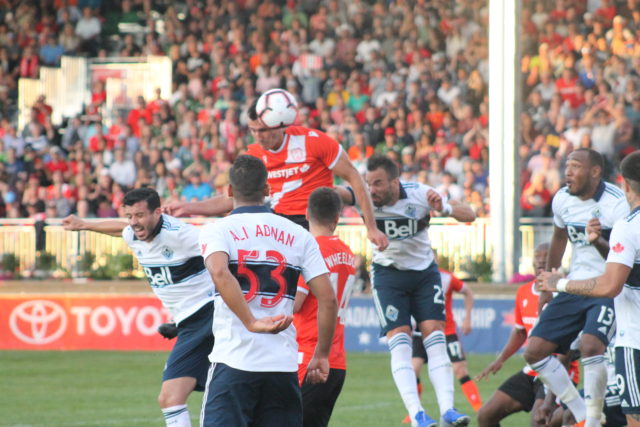 The Cavs had their closest chance to put the ball in the net in the last minute, when Escalante curled a long-range left-footer towards the top corner. Crépeau read the trajectory well, and flew off his line to palm the ball over the bar.

Despite Cavalry’s burst of offensive pressure near the end of the game, the final scoring chance fell to the visitors. More than two minutes into stoppage time, the ‘Caps were awarded a free kick on the right side, which Adnan sent into the mixer. Substitute Andy Rose was free on the edge of Cavalry’s six-yard box, but he couldn’t get a clean connection on the header and the ball sailed just over the bar.

The final whistle sounded shortly afterwards, setting up for another intriguing encounter when these two clubs play each other again in two weeks time. The second leg will be held at BC Place on July 24.

On the Whitecaps’ lack of quality in the final third:

“Yes, it’s not going to change until we better that part of the field. We’re aware of that and we’re acting to improve that. I think overall, there was possession and control [for us] between the first 10 minutes and the last 12 minutes, but there was a lack of being more dangerous in the last third.”

On the importance of the Canadian Championship:

“I’m born in Montreal, I’m Canadian and I want to respect it. I think this allows the game to grow in Canada. As a coach, if I go out there and say, ‘Let’s play our kids from the academy,’ or things like that, it’s not fair for the fans who were here today, the coaches, or for the opponent. We have to take this tournament seriously.”

“I think they’re very dangerous in their direct play. It’s a team I didn’t see that much in possession, because I don’t think the field allowed for the teams to be more secure with the ball. But I thought their direct play, their defending as a unit and their commitment were great out there.”

“I’ve known Max since he was 15 and he was a supporter of Montreal Impact, yelling stuff at me back then, and now he’s here with me. I’ve said enough about him. I think he’s a keeper who has huge margins to progress and could become the number-one for the country. He’s a player with a lot of ability, and I have the luxury as a coach to have another goalkeeper who is always answering in the right way, when we need him.”

On his save late in the game against Escalante:

“I know it was a leftie. I think I played against him before. He’s a guy that opens his hips really well. I saw the ball go through some bodies. I kept my eyes on it and shifted my feet to make the save.”

On Cavalry’s improved play in the second half:

His reaction to the strength of the Whitecaps’ line up:

“I thought it was brilliant. We want to be the best we can be. In order to do so, we need to play against quality players, and tonight, we played against a quality team. I have a lot of respect for Marc Dos Santos – he’s one of the best Canadian coaches we have in this country. He’s done a lot of great things and won at a lot of different levels. We knew it would be a tough game.

“We had to weather it a little bit in the first half until we adjusted. It’s a credit to the Canadian Championship on how he’s trying to win it, as are we. It made for a great game.”

“It feels like a moral victory. The fans were on another level tonight. This performance, we said at the beginning…was for the fans. It’s not lost on us that we’re still growing the game in this city and in this country.

“Right near the end, we finished so strong. José Escalante’s chance, [Trafford] had a header, Dominick Zator had a header, Nico Pasquotti was going down the line, Jordan Brown was putting himself into there. I thought we finished brilliantly, so a lot of fans will take it as a moral victory.”

On the freedom a 0-0 result provides for the second leg:

“The tie is wide open, isn’t it? That’s what we wanted – to make sure that when we went there, we could have a go. There’s no pressure on us. We’re not expected to go through. With that, you can see the freedom the guys are playing with. It’s great to see. That’s how we play most of our games in the CPL, and it was good to see it compare against an MLS side.”

On whether his players did what he wanted them to:

“I’d like to have scored. We set out and I thought our tactics were spot-on to do that. We created some good chances. We didn’t want them to score, so we’re halfway there. We wanted to keep it close so we could open up the July 24 game. I have to say, I’m immensely proud of my players.”

On the crowd’s impact:

“It’s massive. You really felt it today, especially in those last 10 or 15 minutes. It felt like the fan section behind the goal was really trying to suck that ball into the back of the net. We were close to getting it done. It just gives you such a lift and it’s such a point of pride for us as players to see how it’s grown in such a short period of time.”

“I think Marco has proven [his class] since day one. I knew about his reputation coming in, but this was the first time I’ve worked with him personally. He’s so mature for a young goalie. You can tell he’s the ultimate professional day in and day out, at training.

“He never misses a beat, and his performances have shown that. I think he’s one of the best players in the league right now. He’s just a modern goalkeeper in every sense of the word ­– he can make saves, he can play the ball with his feet. It’s good to have him behind us. That said, we have an unbelievable other goalie in Niko, so we’re a bit spoiled in that position.”