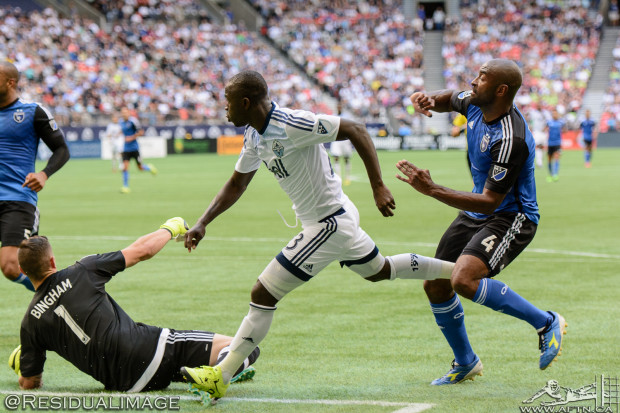 That was the reaction in AFTN Towers to Kekuta Manneh’s abysmal last second miss. My poor television screen. He didn’t deserve that. It wasn’t his fault. All the blame lies on Manneh for that one.

For the second time in two games, the ‘Caps had a breakaway chance in stoppage time to claim all three points. This week’s one was the best one yet. It was two ‘Caps on the keeper. But Manneh’s heavy touch and the inability to look up and see where he was cost Vancouver dear.

An away point isn’t a bad thing in the grand scheme of things, but with three games left and a huge double header coming up against Dallas, it’s not the confidence booster the Whitecaps badly needed.

Instead, they head short handed to face a Dallas side with the Supporters’ Shield aspirations Vancouver once had.

It’s going to be a tense one.

Vancouver headed into this one knowing a win would see them in the playoffs, while a loss would move San Jose to within two points of them and make for squeaky bum time for the rest of October.

I’m not sure how less squeaky those Whitecaps anuses are after a 1-1 draw, but they certainly made an ass out of a game that they should have won.

But the game’s biggest talking point was to come in the closing seconds when Kekuta Manneh wasted a gilt edged opportunity to grab all three points, and Vancouver’s postseason berth, taking a shocking heavy touch on a two man breakaway and squandering the chance.

It was a goal that would have sent Vancouver back to the top of the West, in a tie for the Supporters’ Shield lead, and given the Whitecaps their biggest ever MLS points total with three games to go. Now they have one hell of a fight on their hands to even get an initial home playoff game.

Octavio Rivero returned to the starting line-up after beginning last week’s loss to New York City on the bench with a niggling Achilles injury. Pedro Morales was still being eased back gently, however, and remained on the sub’s bench for this one, with Kekuta Manneh taking on the number ten role and Mauro Rosales returning to his right midfield spot.

With two huge games coming up against Dallas in the next 11 days, the biggest worry for Vancouver heading into this one was potential suspensions to add to the players missing on international duty. Four starters were one yellow card away from missing the next match – Steven Beitashour, Gershon Koffie, Cristian Techera and Kendall Waston.

Pa Modou Kah was another, one card away, and wasn’t dressed for this one, with the risk seemingly too big of missing both himself and Waston for Wednesday clash with the Texans.

They dodged a bullet and got away with just Beitashour missing out, but they took a couple of other full bullets along the way.

It was a fast paced start to the game, with both sides delivering some dangerous crosses into the box but without causing any real threats to break the deadlock.

San Jose were enjoying some success up the right side, with Jordan Harvey having a tough time and Techera not proving the defensive cover he’s been used to from Manneh in recent weeks.

Vancouver were dominating possession, but their best chance came when Manneh fired low past the left post just past the midway point of the half, after being played in by Morales.

Rivero forced a big save out of David Bingham in the 31st minute, drilling a Harvey cutback towards goal, with Beitashour unable to get on the end of the quick travelling rebound.

The ‘Caps were pushing and Bingham had to tip a Waston header over from under his crossbar, with eight minutes of the half remaining.

Vancouver’s pressure finally got it’s reward in the 39th minute when Techera grabbed his seventh goal of the season after twisting and turning in the box, leaving two San Jose defenders on the ground, and seeing his shot take a deflection off Shaun Francis and fly into the net over the head of Bingham.

San Jose would now be forced to open up in the second half, with Vancouver hoping to exploit the extra space with their speedy counter attacking play.

Manneh whipped a low shot wide in an early statement of intent and the Quakes had a couple of half chances, as the game moved from end to end and the physicality ramped up a little.

The Earthquakes got themselves back level just past the hour mark after a rare mistake by ‘Caps keeper David Ousted.

A long ball forward saw Harvey all at sea, allowing Cordell Cato to run in on goal. His shot was straight at Ousted and the usually reliable Dane fumbled and was unable to pounce on the rebound, allowing Wondolowski to nip in and fire home the equaliser.

The ‘Caps looked gutted and both teams huffed and puffed for the winner, although Vancouver looked like they’d settled for a point.

Then in the closing seconds, the Whitecaps were gifted the chance to win all three.

Kekuta Manneh was sent clear on a two-man break with Cristian Techera will only Bingham to beat, but the Gambian took a heavy touch and failed to realise he could play in the Uruguayan, allowing the Quakes keeper to block the chance and save a valuable point for his side.

It was a point that moved San Jose into the final playoff place in the West and while Vancouver remain in second place for now, they now face a mammoth task in their remaining three games to stay there.

On the two game changing mistakes:

“David Ousted has been brilliant all season for us. For me, especially, arguably the best goalkeeper in the league. He’s kept us in games. Now and again, you make mistakes. We’ll get right behind him. He did make a mistake today, he knows he did. he’s gutted in the locker room but I’ve told him to keep his head up.

“Kekuta, we know should go through in the last minute and score. Again, a bad touch. Fine moments went against us today.”

On positives he’ll take from the performance:

“We’ve come off two defeats, sometimes it’s easy to feel sorry for yourself. We showed a lot of character today. They’re fighting for their lives, San Jose. They play a certain way. They put center backs into the box, they put you under pressure, but we never really looked in danger.”

On moving on quickly now:

“It’s a point, so we’ll take a point. We know we should probably have got three. We probably deserved three, with the chances and the mistake at the other end. But what can you do? It’s gone now. You’ve got to focus. We’ll brush ourselves down, we’ll get ourselves back to Vancouver and we’ll have a big game on Wednesday against Dallas.”

“I’m hoping it’s a precaution. He went to sprint down the line and he stopped and it didn’t look good. I didn’t want to take a risk on him, which is why I didn’t play him from the start of the game. We’ll have to see. We’ll evaluate it tomorrow when he gets back. Hopefully it’s not too bad. It’s not ideal putting a sub on then taking that sub off.”

On his mistake for the goal:

“It’s not good enough from me. It happens to the best. We all make mistakes, but I’ve always held myself to high standards and I continue to do that.”

“I feel it’s a testament to the ambition of this team that we come in here and get a point and actually are disappointed. I thought we should’ve won the game today. I thought we deserved to win the game but again it’s the little details that I’ve talked about that we need to sharpen up on and today it was me.”

On Manneh’s miss at the end:

“Obviously it’s a big chance and Scooter knows that he should put that away but again it’s the little details that we need to do better and we’re in this as a team. So everybody steps up and takes responsibility.”

“I don’t know what happened. I took the touch a bit too far and then the goalkeeper came out. He came out, great timing for the goalkeeper, but the touch should’ve been better.”

“It’s not his [Ousted’s] fault. I thought he was brilliant for us. We all make mistakes. David has saved us a lot of points this year and same as me. It happens – it happens to everyone.”

“I thought losing two games in a row and coming down here and getting a point was amazing and the character of the guys today was brilliant. We should’ve won the game. We had chances and we didn’t take them but that’s how the game goes sometimes.”

On making more use of the flanks against Vancouver:

“The middle was pretty blocked up, with the guy [Kendall] Waston and [Tim] Parker. So we kind of had Anibal [Godoy] and JJ [Koval] sit in there a little bit to fight for second balls, and if we could kind of switch it out there quick, we knew it would be a good idea. So, I thought we did okay. It was a real physical game tonight. It was a bit of a ping-pong match to be honest with you. And it was just a real physical test, so any time we could try and get possession of the ball, we looked wide because that’s where the space was.”

On the team’s fortitude fighting for a playoff spot:

On not finding winning goal:

“Vancouver’s a great team, but we wanted to get three points tonight and that was our mind frame from the first whistle. I thought we came out with good energy, but kind of in the wrong places. I thought we were a bit jittery at times, giving away silly fouls, silly set pieces and got punished.”

On David Bingham’s last second save:

“My mind was just sprint back and hope for the best. It’s so nice to have David back there. He’s so quick. Great job coming off of his line to save that. He’s very good at breakaways. He’s a very good goalkeeper.”

On last gasp breakaway save: