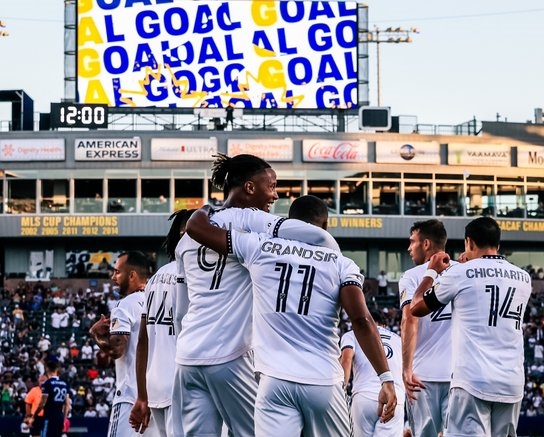 Vancouver Whitecaps have had some horrific outings in Los Angeles over the recent years. Most of those have come at the hands of the black and gold side of the city. It’s been a different story against the LA Galaxy, where the ‘Caps have had a decent record of late. That was all to change on Saturday night when the Whitecaps were blown out of the water by a devastating first half performance against their playoff challengers, eventually showing some fight, but ultimately falling to a 5-2 defeat.

The damage was done in the first half when a Samuel Grandsir brace, a Chicharito penalty, and a long range Victor Vazquez strike had the Galaxy 4-1 up and coasting. The Whitecaps’ sole consolation had been a route one Ryan Gauld goal that had briefly given them some hope when only three down.

Half time sub Tosaint Ricketts breathed some life back into the ‘Caps with 20 minutes to go, but a red card for Cristian Dajome and a fifth Galaxy goal from Efrain Alvarez rounded off a miserable night for the Whitecaps in Carson.

Vanni Sartini tinkered as usual with his starting line-up, making three changes to the side that came away with the big late comeback win against Houston last week. Andres Cubas made a welcome return to the line-up after missing the last match through Covid, but Jake Nerwinski getting the nod over Tristan Blackmon and WFC2 call-up Easton Ongaro starting up front were more odd decisions, and that defensive one certainly came back to haunt the ‘Caps in a calamitous first half.

The Whitecaps started strong, with Ryan Raposo finding Julian Gressel at the back of the box with a cross in from the left, but the German, who looked offside, scuffed his shot wide.

After that the Galaxy took over.

Cody Cropper made a good save from a Kevin Cabral header in the 10th minute, after Grandsir had found him at the back post, but the two linked up again two minutes later to give LA the lead.

Nerwinski absolutely fluffed controlling a ball into the ‘Caps half, letting it run under his feet and allowing Cabral to pick it up and power forward. The Frenchman found a wide open Goodsir, who ran unchecked into the box and buried his cross high into the ‘Caps net.

HOW DO YOU SAY ROCKET IN FRENCH, @SAMUELGRANDSIR ?! 🚀

As bad as Nerwinski’s error was, the complete lack of marking on Grandsir and the wide radius of open space around him is simply unforgiveable at any level of the pro game.

Things soon went from bad to worse for Vancouver, as Ranko Veselinovic was penalised for a handball in the box after a video review and Chicharito doubled the home side’s lead from the spot in the 20th minute with a panenka.

The Galaxy were running rampant and Sega Coulibaly had a chance to make it three but headed over.

LA soon did add to their tally on the half hour mark when Vasquez played a neat one-two with Chicharito on the edge of the box before burying a beauty past Cropper from 22 yards out.

The Whitecaps were all at sea defensively and offering absolutely nothing in the attack, leaving Ongaro to plough a lonely furrow up top, with no chance to show what he can bring to this team.

But from nowhere they got themselves back into it in the 38th minute with a goal out of the Wimbledon Crazy Gang route on playbook.

Cropper kicked the ball long down field, Gauld chased it down, saw off two Galaxy defenders and slotted it past Jonathan Bond.

Cody Cropper sets up Ryan Gauld to pull one back for @WhitecapsFC! pic.twitter.com/qQKANIpDgW

Any thoughts of another dramatic Whitecaps comeback lasted two minutes, as the Galaxy went straight up the pitch and restored their three goal lead with a nice curling effort from Grandsir from the edge of the box that nestled into the bottom corner.

Trailing 4-1 at the half, Sartini made three changes bringing on Tristan Blackmon, Dajome, and Ricketts.

Both teams had some half chances, without really threatening to add to the scoreline, but two of those Whitecaps subs combined to pull one back for the visitors in the 70th minute, when Dajome hit the byeline before perfectly cutting the ball back for Ricketts to finish from a few yards out.

Tosaint Ricketts puts it away to bring @WhitecapsFC within two! pic.twitter.com/0mnt6pvfHU

Hopes were soon dashed again for another late late show from Vancouver when Dajome was sent off for a second yellow in the 77th minute.

The Colombian had been booked for an unnecessary stramash after Ricketts’ goal, but got a second booking after a challenge on Julian Araujo, which was arguably not even a foul, never mind a booking, but with video review not possible, off he went.

The Galaxy went nap in the 89th minute when Alvarez finished off a nice move, and although Gauld forced a sprawling save from Jonathan Bond and then pulled off a great save from Ricketts from the subsequent corner deep into stoppage time, there was to be no more scoring.

The victory gave LA an important three points that stopped their slide and more importantly gave them some breathing space over their playoff challengers.

For Vancouver, they stay in 11th, three points back of the playoff line but with the already small wiggle room reducing that little bit further. An absolute must win match at home to Colorado on Wednesday now looms large.

On what he saw from the match:

“I saw tonight that we finally paid the price of waking up late. After the [Canadian Championship] Final – we actually played that game very well for 90 minutes – but after the Final we played three games in Nashville, against Houston and today and in all the three games we gave away 45 minutes, Nashville maybe a little less. And in Nashville and against Houston we made two miracles, getting back and getting points. Today we paid the price because, you know, they scored four goals in the first half and deservedly so, we were behind a lot at the end of the first half so that’s what happened. It’s on us, on me, on the players and we need to be better … We talked about it again and we need to seriously think how to I’d say tackle better at the start of the game because if not, it’s not sustainable. The second half was actually pretty good until Dajo’s sending off and of course then at the time the game was over two goals up … 35 minutes in the second half showed what this team with the fight, with the correct spirit, could have done from minute one. I am very frustrated and I’m very sorry for our fans. We have to be better. We are still three points behind the line. So it’s there and we know that we had to do 17-18 points in these last 10 games so maybe we could lose one, two games. I hoped not to lose the game like this. Hopefully it’s a wake up call for the next games.”

On the first half of the match:

“Of course, I’m frustrated. Actually we started playing well. We had that big chance with Julian [Gressel] in front of the goal and he didn’t score after four minutes. Then Jake made that mistake and we allowed them being the owner of the field. We weren’t pressing, the distance between the lines were really big. It was easy for them to play and we were always chasing, chasing. What made me frustrated more was we scored two goals very easy on things that we said, playing the ball in behind, playing the ball outside and attacking the space, and we could have scored even more goals. So with a better approach of the game and with a better game off the ball like we did in the second half we would have gone away probably with points. But hats off and congratulations to the opposition too, they did a very good job in the first half.”

On managing the opening minutes:

“It’s frustrating. When you go behind early and you’re chasing the game from the first five or 10 minutes it’s difficult, and it’s situations that we don’t want to be in. And it’s something that we’ve got to change going forward.”

On the instructions coming into halftime:

“When I came in we changed formation. We went to a 4-4-2 and the instructions were stay high up the field, press them as high as possible and cause their defence problems and put them under pressure. So that was the instructions and that’s what we did. As you’ve seen when we go higher up the field and we press a little bit higher, it causes problems for them and they gave up the ball a lot more in the second half.”