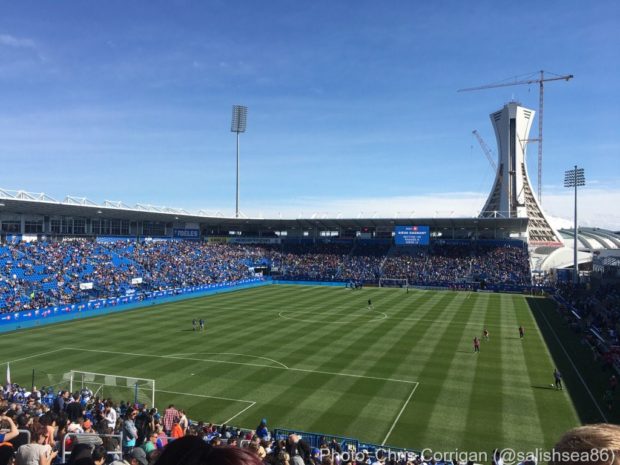 We love the Canadian Championship. Always have since watching that first one play out at Swangard (and elsewhere) back in 2008. For me, you can’t beat Cup football. Sadly though, that’s not how the majority seem to see things here in North America, and as this year’s competition welcomed in the MLS teams, the fact that there is no television deal to show the semi-finals is a sad testament to that.

We all had to make do with a stuttering stream on the Canada Soccer website. A stream which kept stalling, and seemed to have some syncing issues with the commentary. Better than nothing, but as Vancouver Whitecaps second XI battled it out at Stade Saputo against an also weakened Montreal Impact line-up, you couldn’t really help but understand why the television bucks hadn’t been forthcoming.

This year’s cup could realistically be the only chance of success this season for the Whitecaps, along with being the gateway into next year’s Champions League, yet they put in an uninspired first leg performance in Montreal, lacking any real creative spark, and were lucky to come away from it all trailing by just one goal.

That belonged to Alejandro Silva, whose second half strike gave Montreal a narrow lead going into next week’s second leg at B.C. Place, but the Impact could have been out of sight in the tie if they had taken their chances.

As expected, Carl Robinson rang the changes, 11 of them in fact, in an all-change from the starting line-up that lost in D.C. on Saturday.

Stefan Marinovic came in for his first start since his training ground injury in May, while David Norman Jr made his competitive first team debut, benefitting from the ‘three Canadian starters’ rule. The other most notable change was Cristian Techera returning after his three game suspension from MLS play concluded.

With the away goals rule in effect in the competition, Vancouver’s gameplan was always going to be to give up possession, hit on the counter, and see what they could sneak, and that was pretty much how the early going played out.

Montreal carried the play, but neither team were really threatening to break the deadlock, in what was already proving to be a physical encounter.

Anthony Jackson-Hamal was certainly the biggest looking threat for the Impact and after firing over from a good position in the 22nd minute, he rose unchallenged to direct a header off the right post two minutes later.

Vancouver responded and crashed one off the woodwork themselves, with Techera’s dipping cross-come-shot cannoning off the crossbar in the 33rd minute, with the rebound just eluding Anthony Blondell.

That was it for half, and with an away goal now looking like it could be crucial for the Whitecaps, you wondered how much they may push to get it in the second half.

Nicolas Mezquida came close to getting it in the 52nd minute curling a free kick right on the edge of the box inches past the right post.

It was Montreal who finally opened the scoring though in the 58th minute when Silva fired a low one home through a crowd of players from just inside the box.

Yet another goal given up by the Whitecaps from either just inside or just outside the box. Shocking stuff.

And the Impact had a great chance to take a commanding lead in the tie four minutes later but Jackson-Hamal was denied by the woodwork once again, this time the crossbar, with a fierce shot from the edge of the box.

Marinovic then had to come up big moments later with a save to deny a header from Saphir Taider.

Aaron Maund headed over for the ‘Caps but there was very little coming back from them and they looked more than happy to take a one goal deficit into next week’s second leg.

Jeisson Vargas came close to adding a second for Montreal with another shot from outside the box in the 81st minute that flew just wide, but there was to be no more real tests of either ‘keeper.

Vancouver played poorly, their substitutions and lack of real urgency to grab an away goal were both baffling and “oh so Whitecaps” at the same time, but however you view the match, the ‘Caps are still very much in it. A Montreal goal next week will soon change the dynamic of the tie, but until that may or may not happen, then it’s still game very much on. Somehow.

To get into the final though, Vancouver need to be a lot, lot better and have some more urgency than they showed tonight. Whether a line-up is put out there to do that is now the big question, as is how soon they can snap themselves out of a run that has seen them lose four of their last five matches in all competitions.

ATT: None announced yet!

“Well it was a tight game. Both teams had chances. The goal we conceded was a shot at the edge of the box that went between the defender’s leg and blocked my keeper’s view, but I don’t think it was a game full of chances. Half chances here and there, a few set pieces. We disappointed we gave the goal away and we’re disappointed we didn’t get an away goal because I think we had the opportunities to get an away goal.”

Will players like Kamara and Davies help in the second leg?:

“I hope so. It was a tricky tie and decisions because we’ve got a big game on the weekend. We could have put 11 kids out there today and put our total focus on Saturday, but we want to take this tournament seriously and we want to try and win it. We know that it’s a tough two-legged game against Montreal and the winners are probably going to go against Toronto or Ottawa, well they are. It’s not easy to pick your team, so you have to do it based on the feel and the freshness. I’m glad I put 11 fresh bodies in there today because after 60 minutes it was firmly in the balance. I think they had a period of 10 minutes where they were on top and I could see the game getting away from us, so I made some adjustments and then we saw the game out quite comfortably in the end.”

How did you rate your squad today effort wise, tactically?:

“I’ll never fault them effort wise. I thought they worked extremely hard. It’s never easy to come here with your full team. Tactically they got it right. They understood roles and responsibilities, but as I said at the start of it, we’re disappointed we didn’t get an away goal. We went after it. We thought there were chances. We made wrong decisions, we made wrong key passes on the edge and in and around the box, and that’s the difference, not just in this tournament, but in the league. If you’ve got quality in the final third that can open up defences and take chances, it can give you a better chance of winning games. We didn’t have today and they did on the one shot, so disappointing, but the tie is firmly in the balance.”

“It wasn’t the result we were hoping for. Obviously we wanted to get a win here, but this is something we can build on. We know there’s two legs and the second leg is back home in Vancouver. 1-0 is not a bad result. It’s something we can definitely build on going home.”

What playing in the Canadian Championship as captain means to him as a Canadian:

“It is a special feeling because growing up in Ontario, I played in the Ontario Cup and when you play in the Ontario Cup you’re playing to play in the national tournament. You always want bragging rights to be the best team in Canada and that’s just at club level being a teenager, but that feeling is still with me today. So wearing the armband, playing for the Whitecaps, and playing to be the best team in Canada, it’s a special feeling. I thrive at that opportunity and I take it on board and it’s a big honour for me to be the captain of the Vancouver Whitecaps.”

How much angst is the team feeling to get the Voyageurs Cup again after recent failures?:

“We remember that feeling of what it felt like to win that cup and not only what it did for the players in the locker room, but the staff working in the office and the fans that have been supporting us year after year, upset after upset. That feeling is special. It’s something we want to replicate and we feel we have the team to do so this year.”

What was the main thing Montreal did tactically to defend against Vancouver?:

“Especially after they scored the goal they sat back well and they played like 4-5-1 and it was efficient for them. They closed all the lines to break through. We were a bit lazy at some points. That cost us the goal. But I think we’ll do better for the next game and we can manage to break this.”

Satisfied with the one goal?:

“Of course I would have preferred to score the second one to have a bigger advantage before going over there. We have played there and we know that it can be a tough place, but then I had to manage as well the game that we have to play in Portland in three days. You know, it’s half time. We didn’t concede any goals. If we have the chance to score one over there it will be important for us. It’s half time for both teams.”

“He was unlucky because he could have scored two. He tried to do his best and I liked the way he tried to be involved in the collective movement. For all my players I ask as well that they are committed to the defensive task, which is quite different probably to what Jackson was asked to do and to play the previous year. But now he’s more involved in this position and I was happy to see that as well.”

*** The rest of the questions were in French, so don’t have any translations for those answers yet ***