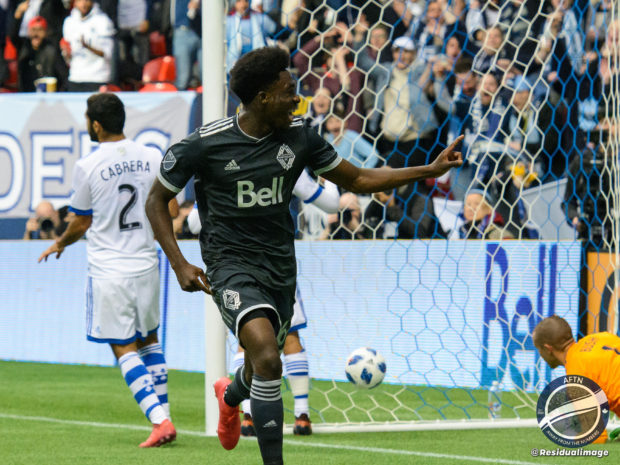 There would be a number of firsts in the Whitecaps 2018 home opener, with Kei Kamara getting his first competitive goal as a Whitecap and Alphsono Davies grabbing the winner with his first MLS goal.

The victory was also the ‘Caps first win in a home opener since 2014, a 4-1 win over New York Red Bulls, following last year’s 0-0 draw with Philadelphia Union and losses to Montreal and Toronto. Getting off to a fast start was just what Carl Robinson had targeted this season.

While the Whitecaps carried the possession and had the better of the chances in the first half, it was scoreless at the break and it took until after the hour mark for them to open the scoring.

Kamara got a glancing header on a pinpoint Davies cross in the 63rd minute to open the scoring. Seven minutes later and Davies would get his own, as he redirected a Cristian Techera pass that just got over the line to double the Whitecaps lead.

That should have seen Vancouver home and dry, but they made life difficult for themselves and Montreal pulled one back nine minutes from time, when Matteo Mancosu found himself at the back post with a free header that beat Stefan Marinovic.

And the Impact nearly pulled off a shock comeback moments later when Kendall Waston failed to clear a ball across goal and Mancosu just missed hitting an open net.

A massive let off for the ‘Caps and although they will be concerned at those ten minutes of defensive faltering, the three points and getting their season off to a winning start will override those feelings.

Next up are Houston, fresh off an impressive dismantling of the highly tipped Atlanta United. That will definitely be a good test to see what this Whitecaps side is made of. 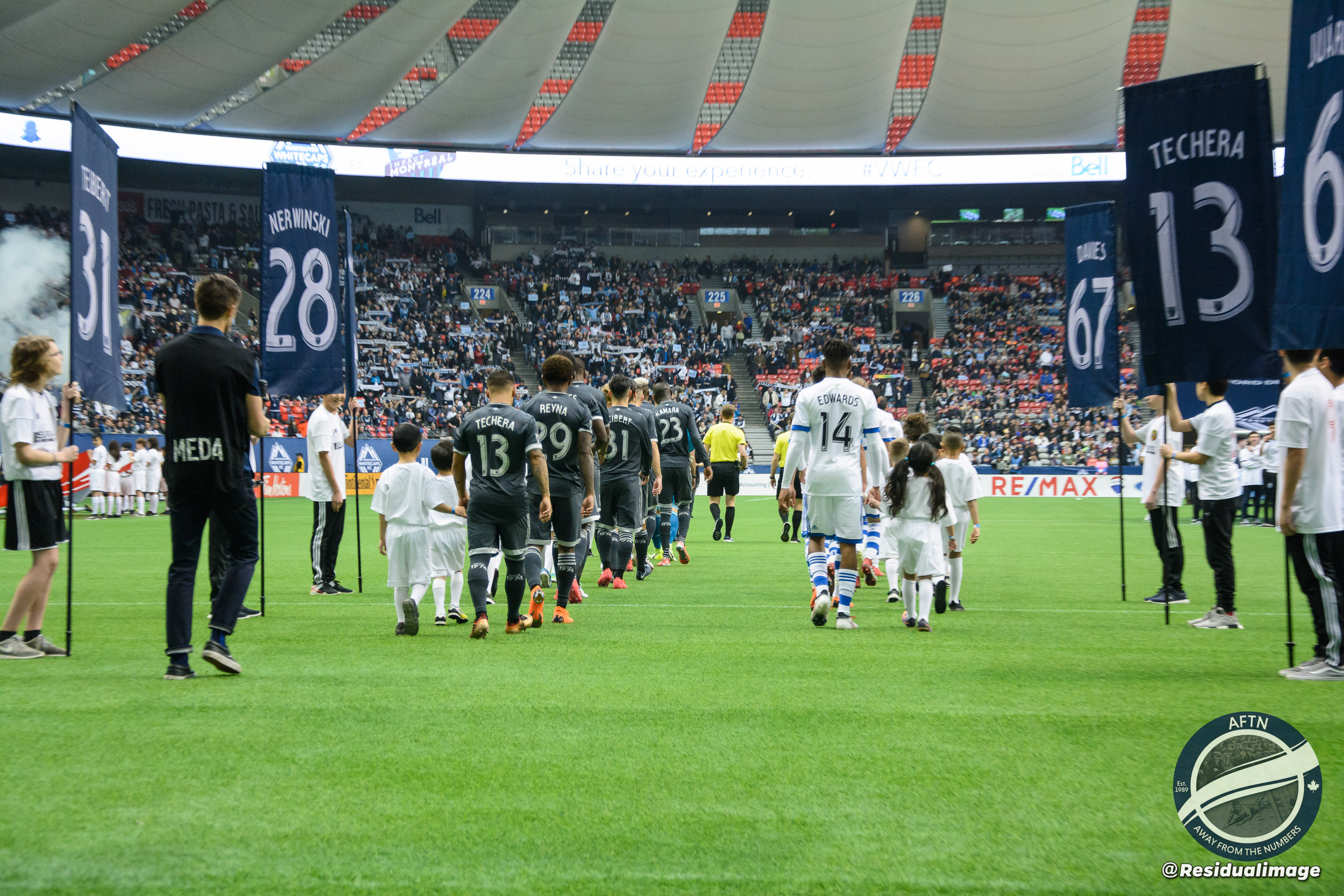 “I thought he started the game very well, on a positive note for 20 odd minutes, and then he lost his way a little bit prior to halftime. But I challenged him and Cristian Techera, the Bug, at halftime to get more balls, to be more positive, and if you make a mistake don’t worry about it. But I do require you to get crosses in and get it in to the back stick. He’d certainly done that, so he should be proud of his work, as should every player today.”

“He wasn’t bad, was he? He led the line very well. It was a mature performance by him, as I would expect. Just hungry to play. He sets the tone with the work rate up front, holding the ball up, flicking it on, and he allows the wide players and the midfield players to get up the pitch a bit more. So he was the focal point of our attack today. I thought from goalkeeper to centre forward we were very comfortable in the game, barring the last 10 minutes when they scored their goal. Then we stopped doing things that we’d been doing for 80 minutes and we made it a little more interesting than we needed to.”

On getting nervous after seeing missed opportunities:

“I don’t get nervous, to be fair. Maybe I should. I challenged my players, I said to the players yesterday ‘Don’t get nervous. Let me know, you won’t play’. But I don’t get nervous. I actually find out what my players are about when the chips are down – when you can see with 10 minutes to go at home in front of 28,000, on opening day. That’s when you find out what team you’ve got. And we’re a good team, so we’ll take the three points. It’s only three points, but it’s a great opening day for the football club.”

“That’s exactly what you want as a player, to score as a striker and then of course you want to win, but it was really special out here tonight, the fans brought it. Me and the guys in the locker room were ready for it, and at the end of the day the three points is what we got.”

On Alphonso Davies’ performance and potential:

“It’s good, we’ve been doing well in preseason and that’s where it translates to the game, it’s not just about today, he’s still a young boy so we got to be able to push him to perform in five or ten games consistently, with hopefully the same crowd the same energy not to push just him but all of us. He did well tonight.”

On being a mentor:

“No, if I’m going to have to be a mentor for him, they are going to have to pay me for that, no but I want to be an example for him and be somebody he can learn from by seeing me day in day out. I do talk to him on and off the field, and I don’t want to put too much pressure on him or expect too much from him because that would make him crumble, and you’ve got to let him enjoy it too he’s just a young boy. He’s good, not just this year, I’ve watched him before I came to this team and I appreciate the way he plays, but then again it’s all about the guys around him, he’s got Marcel [de Jong] behind him, works really hard to make sure he covers whatever Alphonso leaves behind. It’s a really good collective of everyone.”

On the effect of the win on the team spirit:

“You guys should go in there and hear the music and we all want that, every win counts, we’ve been doing well in the preseason, but first game of the season at home, there’s a lot of adrenaline pumping from everyone and the away team wants to come in and disrupt your part but it’s a good thing that we are able to send 18,000, 20,000-plus home happy.”

On scoring his first goal at BC Place, watching Alphonso score, and the celebration:

“For me it’s good, I’ve played here before, I’ve scored here before, it’s nice now to finally score for the home side, I had a pretty tough first half so there’s nothing better than scoring in front of all three supporter groups. With the celebration you just have to enjoy it, it was really hard work from everyone tonight and you have to enjoy it.”

On scoring his first MLS goal, and on his personal goals:

“It was exciting you know, it was a big weight off my shoulders to get that first goal. I was excited to get it. It took awhile, but I try to help the team. I could go all year without scoring if that’s what it takes to win the MLS Cup, that’s the most important thing. I want to get as many assists as possible, being a winger who supplies crosses for my strikers.

On his relationship with Kei Kamara:

“Me and Kei hit it off right away. When he first came in, we got used to each other quickly, during training we practiced crossing and finishing all the time. I didn’t hesitate when I saw him, just put it in the box for him to finish. I’m excited, he’s a really good player and a good role model.”

On connecting with Kamara on the goal, and on playing with him, and their celebration:

“I play on the Canadian team with Michael Petrasso. Usually, he doesn’t play tight to you, when I saw he was giving me room, instead of trying to beat him, I just put it in the box for Kei. I’ve learned not to be scared when I’m on the field, go at players and cross the ball. That’s pretty much it. It is fun, you know at the end of the day he will have your back, it’s the same with all the other players. During preseason me and Kei were talking about how we have to celebrate together. When Cristian Techera crossed the ball, I was a little scared that it wouldn’t go in, but it did. Kei came up to me and was like, ‘let’s do this,’ So we did it.”

On his approach to the season:

“I think the result is quite fair, to be honest. But I think we gave a tough second half to Vancouver, especially at the end of the game and the beginning of the second half. In the middle of this half we had troubles. We didn’t play well and we conceded two goals in a row. When you are two-nil down it’s difficult to come back, but I like the character with which my team played. We came back and we frightened the opponent until the end. This is the positive point that I want to have tonight.”

On how the Canadian players fit into the lineup:

“Hopefully they are very important players within the team. Some of them are young players discovering MLS as well, and probably they need a little bit more time to be more comfortable. But they are good players, very good spirit in their training, and hopefully they will improve their level and the team level as well.”

On the adjustment to MLS:

“You don’t have so much time to learn in football. It’s competition – either MLS, or Ligue I, or EUROPA or Champions League – it’s always a competition where you need to win. It’s football, eleven against eleven. I try to do my best within my players, and I’m sure we will have better results one day, of course.”

“I think they have settled in really good, the effort was great today, you know we lack concentration for maybe 10 or 15 minutes, but we react really well. I’m really happy with the performance today and the guys.”

On heading into road match against Columbus:

“Obviously it’s going to be a tough one, you know Columbus is a good squad, coming of a 2-0 victory against Toronto, it’s going to be tough, but we have good element here and if we stick to the game plan we can do something good.”

“I think we defended really well despite the two goals, maybe we had a lapse of concentration for a couple of minutes but we stick together and the block was really strong. We moved the ball well, unfortunately they didn’t go in, but there is a lot of positives to take away from today’s game.”

On the result and its impact on the rest of the season:

“The season is really long and for the first game I thought it was really good, I think we have to build on that and keep pushing forward.”

Thoughts on the second half:

“I think we were the aggressor in the game. I thought we had more chances than them. It’s just one of those days we couldn’t capitalize on those chances.”

On how he handled himself:

On signing his first pro contract and making his debut in one week:

“It went by quick. I believed in my ability all preseason long. All I need to do is work hard and the coaches see that.”