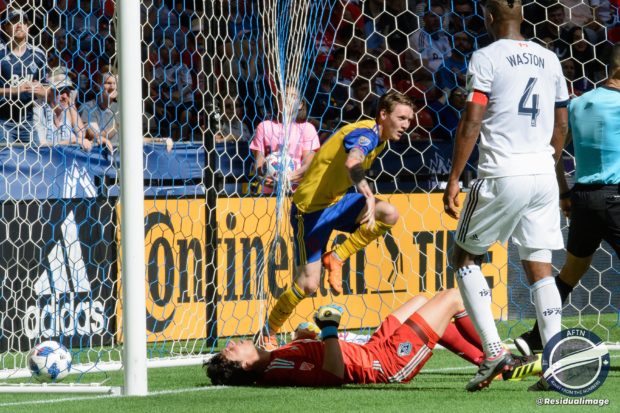 Despite the controlling of the majority of play, Vancouver Whitecaps were unable to secure any points on Canada Day as they lost 1-0 to Colorado Rapids at BC Place on Sunday afternoon.

An own goal from Marcel de Jong in the first half would prove to be the difference, with Tim Howard making ten saves for the cleansheet. At least a Canadian got on the scoreboard.

It was a slow start for the home side in the first 20 minutes as they managed a couple of shots from outside the box, with the best chance coming from Marcel de Jong.

Colorado had a very dangerous chance when a shot looped over the Whitecaps backline into the path of Joe Mason but his attempt was denied by Brian Rowe from point blank range.

Ten minutes later Howard had his turn to make a similar stop when he stopped Nicolas Mezquida from in close after the Uruguayan was set up by Alphonso Davies.

Davies had another chance from in close after some “fancy” dribbling by Felipe but his shot blocked by a Rapids defender, after Felipe fell over in the box.

Once again the misses would prove costly as the Rapids would go ahead before the half when after Rowe produced a brilliant save to deny Irishman Joe Mason, but he could only look on in despair as the rebound bounced off de Jong into the net for an own goal. When your luck’s not in, your luck’s not in, and that seems to have been the story for the ‘Caps keeper in his recent spell in goal.

The second half saw play slanted for the most part towards the Colorado goal as the ‘Caps were trying to get that tying goal, but were unable to break down a resolute Rapids defence.

A volley from Kei Kamara in the 53rd minute was stopped by Tim Howard and then midway through the second half a header from Kamara hit the bar, but that was to be as close or as dangerous as Vancouver got.

In the final ten minutes Horward came up big again with a diving save from a 30 yard plus shot from Jordan Mutch and then another stop of Kei Kamara from just outside the box.

There just wasn’t enough finish on this night as the Vancouver would drop another result at home this time to Colorado. Far too many points have been dropped at home, but if you can’t take your chances you can’t expect to get anything from a game. In those gsmes, 71.6% and 25 shots mean absolutely nothing. The only stat that matters is the final scoreline.

The loss puts the ‘Caps playoff hopes in peril. The consistent’y poor performances against weaker sides is costing them dear and could be the tipping point come the end of the season to see whether Vancouver carry on into November or have a long offseason to ponder just what went wrong.

CARL ROBINSON
On areas of improvement:

“What we need to be better at, and it’s a recurring theme, is giving away bad goals. They had one chance in the first half from a misunderstanding and they scored a goal, whether it’s an own goal or not. And missed chances, we missed a number of chances today. I sensed it would come because they hung in the early stages. When you give a team the lead, as we’ve seen today, it’s very hard to break them down. We weren’t good enough.”

“Anyone who watches the game, if they’re open and honest about it, would say the goalkeeper played very well. That’s what they’re paid to do. My players are paid to put the ball in the back of the net. I’ll give them a lot of credit because he had a very good performance but we need to be a lot better, especially in front of goal. You can’t turn out five, six chances that we did today and win games of football because it will come back to hurt you.”

“I’m pretty open and frank. This one hurts because I think they didn’t deserve that today. Sometimes in football, you don’t get what you deserve. We didn’t play well last week, we were awful and we got what we deserved. Today, we didn’t get what we deserved, but this is football, and this is what happens. It’s important you understand that and stay positive. The crowd was excellent today. It’s Canada Day, it’s a special day and I asked them to be loud, and they were brilliant. I’m disappointed my group of players was not able to get them the result they deserve, not from performance, just a little bit of detail.”

“Kendall’s a big player for us, we know that. He had a little bit of a stiff groin at halftime, I didn’t want to take any risks with him because he was holding it a little bit. I just thought at halftime we could make an adjustment by putting in an extra attacking player on. We had given them the one goal that they probably wanted and something to hang on to. We made the adjustment.”

On the Rapids game plan:

“I think it’s fair to say they played defensive football for 90 minutes, they come with a game plan and credit to them, they wanted to stay in the game early and they should have scored after a minute, but they didn’t. It was important we got our positive start and then the game settled down a bit, they played the same formation, a 5-4-1, which credit to them again because they managed to get a goal, and when you give a team something to hang on to, it’s very difficult and it’s been a recurring theme. We haven’t been good enough against teams sitting in on us this year, we’ve created a number of chances, we haven’t taken the chances. We take the chances and we’re talking about being good enough to break the team down, so it’s an area we really need to improve on.”

On the frustration of not converting on scoring chances:

“It’s tough, because the boys are working hard. I don’t think that you can fault anybody’s work rate today. After last week’s disappointment I thought everybody came in with the right mentality. But it just hurts to lose like that, a half-chance after we dominate the entire match, to come out on the short straw today.”

On allowing Colorado their first road win of the season:

“It’s MLS, any team can win. That’s how much it takes. They took their one little chance that they got. Besides that I thought we were rock solid and we were golden. It’s part of the game. We take this one and we keep moving forward.”

On starting next to Kendall Waston for the first time:

“Kendall’s a determined man. Obviously he didn’t get as much game [time] as he wanted over there [at the World Cup]. He came back right away with the right mentality to play. He came in, and this was the first game we played together. I’m sure that with a few more, the chemistry will be rock solid with the two of us.”

“I wish we’d won. That hurts more. I’m gutted. The fans were there in numbers today, and it was a great feeling. The only thing we didn’t do was get the win today. But we take the positives out of it. We possessed the ball really well. We had flashes and chances of good football, and we dominated this team. The take a half chance and they score, and they park the bus. But the work rate from the boys today, we worked hard and everybody gave everything today. Maybe on our day we beat this team 4-0. But it doesn’t matter, today they won. We know that it’s a busy month for us, so we just continue to go on.”

On using the result as momentum heading into the next set of fixtures:

“Well I think from the position we were in, I think it’s important that we pick up as many points as we can and I think that we’re incredibly pleased with the result tonight. This week that’s just about to start, the key for us now it total focus on recovery, professionalism, and making sure we’re ready for Wednesday.”

On the defensive effort:

“I thought the players showed incredible character, defended for their lives. That wasn’t the intention, but when you’re away from home and they have some attacking players with a lot of pace and power – [Alphonso] Davies, [Kei] Kamara – and they threw everything at us. And I thought as the game moved on, they pushed higher up the pitch, in the end the players were magnificent and I’m incredibly proud of them.”

On getting a road win:

“That was massive for us. After two results, we needed to build on that and get our first road win. It was huge.”

On the defensive performance:

“I think we limited the space for them to run in behind. That’s kind of their strength, and from that we just defended well as a unit. We got bodies behind the ball and we all put our bodies on the line to help protect the goal. Tim [Howard] was great back there, and everyone really pitched in tonight.”

On the changes to the lineup and chemistry:

“We train, right, so that’s where we try to build some patterns. Obviously, we don’t have the benefit of playing multiple games together yet, so there’s obviously going to be some parts that are not working perfectly. But that’s why you’re out there, you’re trying to communicate, you’re trying to put each other in good positions and especially cover for each other if someone messes up. That’s what we did.”

“It was amazing man. It just felt so good to be back out with the squad, and it felt good to contribute. I played my part in helping us get a result.”

On the defensive performance:

“It’s just a mentality. It took a lot of character out there on the field. It’s not easy to defend all those crosses. They’re a good side and they just kept coming at us. I’m just proud of the way we came together collectively and fought, and we just had a great mentality.”

On playing the Sounders on Wednesday on July 4:

On getting stick from Whitecaps fans and giving it back:

“Yeah the fans are crap. You know they’ve always got something to say. Look, I don’t take anything lying down. Any chance I get to give them some stick. When I walked off the field, they didn’t have much to say. Unfortunately they all went home.”

On the pitch invader kicking the ball away from him at a goal kick:

“I’ve been around long enough to see some really bad incidents with fan violence towards players. Security has been an issue in this league for a long time. Hopefully we can continue to crack down and get better.”

On watching the referee make his VAR decision in the first half:

“Unfortunately VAR has gone against many times this season. You can’t go inside that little dotted box, but I was outside it. I wanted to see what the referee could see, so many have gone against us. The VAR part has been a bit of a mystery.”