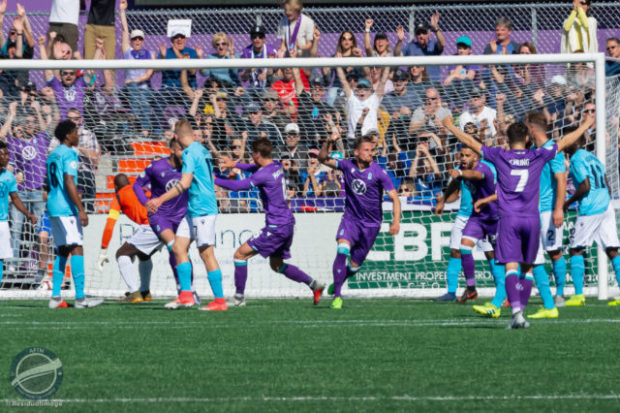 There was a moment midway through the first half when, in a wild two-minute spell, possession was conceded, regained, and then conceded again at an almost comical rate from both sides. The pitch became a pinball machine. Nobody wanted to lose the ball, but nobody really wanted to keep it either.

It was that kind of a game. On a balmy spring afternoon in Langford, B.C, under the nose of a garish sea of purple, a historic, scrappy, and frantic 90 minutes of football took place.

It was an odd match, really. Maybe it was the camera angle, maybe it was the difficulty locating the ball amidst the coruscating haze of the turf, or maybe it was simply the emotion of the occasion, but on some subliminal level, it took a long time for it to really register as a game of football.

At times, it was like watching a lifelong friend suddenly start communicating with someone in a foreign language; by all intents and purposes, it is still them, but something is undeniably amiss.

Regardless, Pacific FC did enough to earn a 1-0 victory, and as a result the first win by any team in Canadian Premier League history.

The goal came after 23 minutes. Rushing to meet Noah Verhoeven’s corner was Hendrik Starostzik, a player who seemed just as surprised as anyone to find himself with a free header from six yards out. 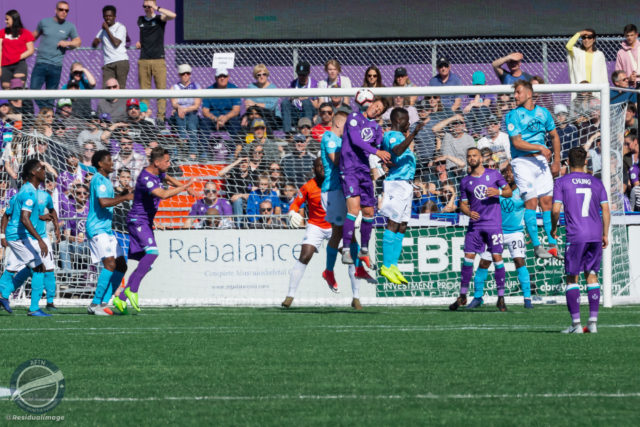 There will be questions asked of the defending here. In fact, it will probably be the first roll of tape the Wanderers’ coaches play when they sit down to analyse the game on Tuesday morning. Irrespective of how well you’re playing, it’s important to get the basics right first; and denying the opposition free headers in your 18-yard box is very much a basic.

It was reflective of the first half Wanderers performance. There was a nervous edge to them. A tentativeness in attack.

After the goal, Pacific grew into the game, but not without suffering a scare when Andre Rampersad had the ball in the net two minutes after the home side had taken the lead, but he did so from an offside position.

Under mounting pressure, HFX retreated, and the gap between the five midfielders and Tomasz Skublack became too wide. Defenders were forced to play lofted balls on to his chest; some of them stuck, many of them didn’t. But even when they did it was difficult for anyone to make up the ground in time to offer support.

Pacific’s midfield started to control the game. The guile and craft of Ben Fisk and Victor Blasco was difficult to manage. Matthew Baldisimo was a combative ball of energy, snapping at the heels of Elton John, Rampersad and Juan Diego Gutierrez whenever they found themselves in possession.

Up front Marcus Haber did what Marcus Haber does. The Canadian is a big, robust, battering ram of a player; all flailing arms and focused force. He is, let’s be honest, an absolute bastard of a striker. Not that Pacific will mind too much. After all, he’s their bastard.

Under the cosh, Wanderers began to defend with a flat five across the middle. The defenders squeezed in tightly behind them. It allowed Pacific to get in behind on the flanks a number of times. Several dangerous crosses were cleared, and Jan-Michael Williams had to be alert in the visitor’s goal.

The second half was better. There was more conviction to Wanderers’ play. The spaces between players became shorter, and the introduction of Kodai Iida brought a frenetic, much-needed energy to the Wanderers midfield.

And then, in the 72nd minute, Pacific FC were reduced to ten men. Even the most ardent of fans on the West Coast would be hard pressed to argue that it wasn’t the right decision. As Iida raced through, Lukas McNaughton hacked out a reckless leg that sent the Japanese attacker sprawling. A second yellow card was issued and the red soon followed.

Wanderers pressed and pressed. Mohammed Kourouma hit the bar with a fantastic free-kick, and Chrisnovic N’sa was desperately unlucky not to score from a goalmouth scramble. But Pacific held out.

Pacific FC began life as a professional club with the league’s first ever victory. HFX Wanderers with a 1-0 defeat.

There were bright sparks though for Wanderers. Juan Diego Gutierrez was a busy, pervasive presence. A lot of what he attempted didn’t come off, but he was one of those brave enough to try.

Akeem Garcia, too, was a threat down the right. The Trinidadian has a wriggly quality that allows him to back in to his marker, before spinning them and getting a cross away. Those crosses didn’t quite hit the mark yesterday, but should he have more options to aim for in future, you’d expect him to collect his share of assists this season.

A word or two must go to the back-line, too. Chrisnovic N’sa and Peter Schaale did phenomenally well to contain Marcus Haber throughout the game. N’sa, only 20-years-old, and Schaale, who has played the majority of his football at university level, barely gave the 12-year veteran a sniff.

In the full-back positions, Ndzemdzela Langwa and Zachary Sukunda also put in good, solid performances. Langwa, in particular, was excellent.

Stephen Hart, speaking afterwards, claimed that ‘nobody wanted to accept the responsibility to play football’, and while there are elements of truth to this assessment, he’s perhaps being a little harsh. Pacific simply didn’t allow Wanderers the chance to play football for much of the opening half, I’m not sure how much it was to do with a lack of character.

A lot of work will be done at the HFX training ground this week to right a few of those wrongs, but to over-saturate the post-match discussion with matters such as these, after an occasion such as this, seems to the miss point somewhat. For this game at least.

Because Victoria, British Columbia and Halifax, Nova Scotia have a professional football team. And Canada has a football league. And that’s the only thing that matters today.

Here we have it

🏆 The first victory in @CPLsoccer goes to @Pacificfccpl, in a well fought 1 – 0 win against @HfxWanderersFC

Was first match everything he was hoping for?

“Yeah. The stadium was buzzing. It was nice to see all that purple out there in the stand and I thought the boys put on a good show. They played good football and at the end, when they had to get it over the line, they did that as well.”

On bossing the game for most of the match:

“We talked about having consistency and I feel they tried hard. They put in a big effort there and at times good football as well. I’m very pleased with their performance.”

On the importance of not just getting a good start but getting wins at home in a league with so much travel:

“It’s important but also just starting off with a win. It’s good to get that first win out of the way. That’s how it is every season. It’s good to have that put under your belt already and then we can move forward from here.”

On good team chemistry this early:

“We prepared well and the boys have trained very well. This is not the finished product yet, but from where we’ve started until now, I think we’ve come a long way.”

On how the Whitecaps connections may have helped with the chemistry:

“I feel that the whole group has come together really well. I don’t know if we play the same way they do at the Residency but I definitely feel we’re trying to take on our own way of playing football.”

On how soon the remaining roster spots may be filled:

“We’re already on it. I’m hoping we can talk more about that really, really soon.”

On the atmosphere and packed stand:

“I’m so happy that all these people came out. The whole island has gotten behind us. We are an island team and we play for the island.”

Thoughts on the game and the occasion:

“Both not the result and not the performance. You could accept it if you played well and you lost. I thought in the first half nobody wanted to accept the responsibility to play football. We did much better in the second half and, of course, when they got somebody sent off we started to take over the game and unfortunately we couldn’t get the goal to probably come away with a point.”

What did it mean to him personally to be a part of this special weekend?

“I’m grateful to play a small part any time in helping Canada Soccer and this is just fantastic for the young players and the league, so of course I was excited for that.”

Thoughts on the long travel for the match:

“It’s not an excuse. That’s what the league is. That’s what life in Canada is when you’re playing in the league. You have to deal with it. We tried to make the players as comfortable as possible. Obviously it’s going to have some sort of effect, but hey, that’s what it is and I’m not going to use that as an excuse.”

Thoughts on atmosphere in a similar stadium to Wanderers’ one:

“I thought it was fantastic. Nice crowd, nice venue. It was great. When you go home, hopefully it will be as boisterous, good support. Right now I’m more concerned with how the practices will go leading up to that game.”

What do HFX need to work on now heading into their home opener?

“You try to be as detailed as possible and help the players out, but at the end of the day, you have to accept responsibility. You have to play the game. In the first half [today], there were a lot of nerves, a lot of panic. It’s understandable, but they’ve got to get over that because in the whole scheme of things we have a way that we want to play and we have to at least try to put that on the field and if it’s not good enough on the day, we have to accept that.”