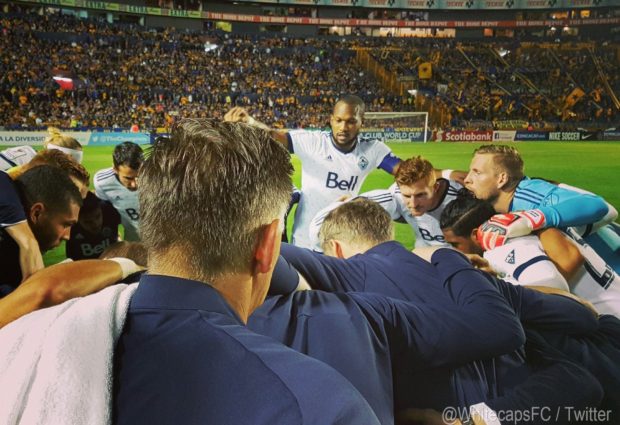 Forget the last two MLS matches, this was the game everyone was waiting for. Vancouver Whitecaps first trip to Mexico. A Champions League semi-final. But could the ‘Caps keep their dreams alive or would they crash and burn in hell of the ‘Volcano’?

In the end, the Whitecaps put in a strong defensive display but were undone by two late lapses after keeping the Mexicans off the scoresheet for 66 minutes. A Kendall Waston own goal and an Eduardo Vargas strike did the damage, giving Tigres a two goal lead heading into the second leg at BC Place on April 5th and giving Vancouver a huge mountain to climb if they are to make history.

It’s a massive task. Not an insurmountable one though. There’s still hope and they’re still in the tie, and that was one of the key targets by Carl Robinson heading into the first leg.

Carl Robinson went with an experienced line-up making eight changes from the side that lost 3-2 in San Jose at the weekend. With an older team, including three players with previous CONCACAF experience at international level for their national teams.

Only two MLS have gone to Mexico and come away with the win. Tigres have only lost one Champions League game at home, keeping seven clean sheets in their 11 previous matches and conceding only four goals. It was always going to be a tough ask for the Whitecaps.

The opening minutes of each half were going to be key. The first half especially, where you felt Tigres would lay siege to the Whitecaps defence in the first ten minutes trying to deflate and punish Vancouver from the off.

The ‘Caps looked to have settled early in the intense atmosphere, even surviving the first Tigres corner seven minutes in when David Ousted made an easy save for an admittedly not fully connected Andre-Pierre Gignac shot from six yards out.

Tigres were controlling the possession but Vancouver were having a couple of forays forward, without really creating anything. Still it killed some time.

Somewhat worryingly, the Whitecaps picked up two early bookings by midway through the first half, with Marcel de Jong and Waston getting yellow cards for a couple of challenges.

Tigres had only their second shot of the match 25 minutes in when a corner broke to Luis Advincula on the edge of his box, but his curling shot flew over by a foot or so.

Ousted was called in to action in the 33rd minute, forcing a Vargas header around his near post and Tigres came within inches of taking the lead four minutes later when Tim Parker’s leg knocked the back just past the left post under pressure from Gignac.

But the ‘Caps held firm and got to the half scoreless and still very much in the tie.

You expected Tigres to up the pressure in the second half, and they did, to a degree, but the Whitecaps defence was looking strong, with Waston coming up with a huge tackle in the box and Parker showing nice hustle to keep Gignac away.

Tigres should have taken the lead three minutes before the hour mark when a Gignac header back across goal was met by Luis Quintones but he somehow headed over, clattering Ousted into the goal instead.

Two minutes later, the ‘Caps had their best chance of the night so far when Brek Shea was sprung but couldn’t keep his footing, then when he recovered, flopped down looking for a penalty as he went past Tigres keeper Nahuel Guzman, earning a booking for simulation for his trouble.

As the second half approached the midway point, and just when you were starting to wonder whether the ‘Caps should bunker or go for the crucial away goal, the tie changed and Tigres got their breakthrough.

Waston failed to cleanly connect on a clearance keeping the pressure on and then ending up turning the ball into his own net from a low cross into the box, giving Ousted no chance. So cruel after what had been a fantastic defensive showing from the ‘Caps captain.

But Ousted then came up with what could prove to be a crucial save in the tie, with a sprawling dive to keep out from yards out with 20 minutes remaining.

Nicolas Mezquida nearly had the Whitecaps in dreamland with 12 minutes remaining when he pounced quickly on some sloppy Tigres defending, showed a great first touch, but pulled his shot wide when in to the left of the goal.

Tigres had a couple of close calls and half chances but looked to be heading back to Vancouver just a goal behind, but for the second time in the match, the inability to clear the home side’s pressure led to their downfall.

As the ball stayed in Vancouver’s area, the ball eventually fell to Vargas who drilled home low through a crowd of players to give Tigres what could be the telling goal in this tie.

It was the final goal on the night. How big an impact it will have on the tie, we’ll find out in three weeks. At 1-0, ‘Caps were right in the tie. At 2-0, it’s a huge uphill task and an away goal for the Mexicans kills it stone dead.

But they’re still in it and that was one of the aims heading into Mexico. Patience will be the key in the second leg. If the ‘Caps go in all guns blazing, it’ll be lights out early. It’s still a huge ask, no matter what, but a goal for Vancouver and it’s very much game on. We can’t wait.

To AFTN and MLSsoccer.com

“The game panned out as I thought it would in relation to the type of game it was. We knew they’d have lots of possession and try and put us under pressure in certain ways. I thought the boys were excellent in their shape and organization. It was disappointing that the goals came from two little details that we didn’t get right. Obviously the first one was an own goal, it was a clearance, and the second one we didn’t track back properly, in time. We didn’t expect that to happen. We let a runner go and obviously it was a great strike. There was a lot of positives and plusses, and we’re still in the tie. It’s going to be difficult, but we’ve got to try and get the first goal.”

“We know [David Ousted] can do that. We want David to get back to his consistent best and doing the best he does week in and week out. Unfortunately at the weekend it didn’t go his way and he rebounded back very well. He put in a very strong performance, as did all the players. They gave their all. I asked them to not leave anything on the pitch and leave no regrets and they certainly done that. [Tigres] were the better team on the night. We’ve got a second leg and we’re still very much in the tie if we can get that first goal.”

On the performance of Kendall Waston:

“He’s been excellent all season. The performances he’s put on have been very, very strong and today was no different. He picked up an early yellow card, but he handled the game very well. Aside from the own goal, he put on a monster performance.”

On what the captaincy does to Waston:

“I think it does [calm him down] and that’s the purpose of it as well. It’s made him concentrate on being a leader. We know he’s a leader with the way he plays. We just need to cut out the little bits and pieces he got himself involved in too much last year. The nonsense as I call it. As the captain you don’t do that. I don’t want you to do that. So the added responsibility hopefully will continue to show his good form.”

“The game played out exactly the way I thought it would. Unfortunately we couldn’t take the two chances we had.”

“We must get the first goal in the next game, and then we’ll see where it goes.”