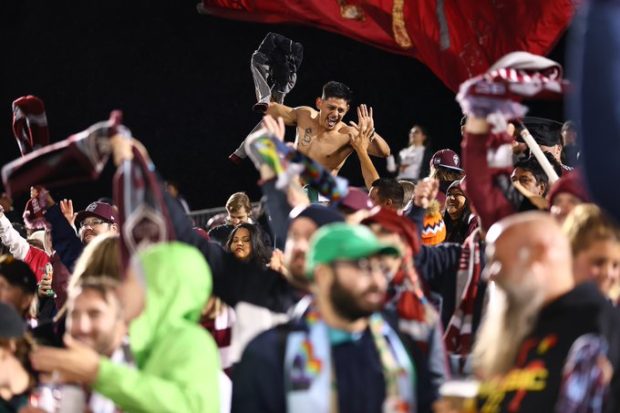 It all started so well. That could be five words that sum up Vancouver Whitecaps night in Colorado on Saturday or Vanni Sartini’s stint as head coach of the ‘Caps, or both.

With both Ryan Gauld and Lucas Cavallini suspended, it was slim pickings in attack for Vanni Sartini, who made three changes from the team that lost in San Jose next weekend, going with a 4-3-2-1 Christmas tree formation for the first time this season as Cody Cropper returned between the sticks.

Rubio had the first chance of the match just two minutes in for the home side, flashing one just wide of the left post from the edge of the box.

But it was Vancouver who jumped into the early lead in the 9th minute when White finally showed some of the skill and form he brought down the stretch last season, flipping the ball over the head of Lalas Abubakar, who then fell as he chased it down, allowing the ‘Caps striker to show a deft touch in the box to get the ball onto his right foot and drill it past William Yarbrough from 12 yards out.

Brian White puts it away and @WhitecapsFC take the lead! pic.twitter.com/kt3TBXryzG

And that was as good as it got for the ‘Caps.

Colorado had a couple of half chances as they tried to get back on level terms, with Vancouver giving up possession and allowing the Rapids to dictate the play, without really testing Cropper in the ‘Caps goal.

That all changed in the 21st minute when Zardes equalised for the home side.

Danny Wilson played a long back forward for Lewis to chase down. The winger squared the ball for Felipe Gutierrez, who had a little touch to his outside for Zardes to blast home his 10th of the season and make it 1-1.

And that was where it all started to unravel for the visitors.

Lewis continued to prove to be a handful and when he went down in the box after a lengthy tussle with Ranko Veselinovic in the 32nd minute, referee Kevin Stott pointed to the spot.

The contact seemed to be outside of the box but video review didn’t give the ‘Caps a reprieve and Rubio tucked it home from the spot to give the Rapids the lead.

The challenge was a clumsy one and if the Serbian was going to bring down Lewis he really should have had the wherewithal to have done so well before the pair had gotten anywhere near to box to even give the referee the decision to make.

More disappointing and infuriating defending from Vancouver, in one of the clear areas of the team that needs heavily strengthened in the quickly looming offseason.

Veselinovic was keen to make amends and his stoppage time shot forced Yarbrough to turn it around the post for the corner, in the closest the ‘Caps came to tying things back up again before the break.

With no changes at the half, and a limited list of resources on the bench, the Whitecaps were having to rely on what was already on the pitch, but they needed to quickly turn things around if they were going to save their season.

Tristan Blackmon was inches away from getting his head on a lofted Pedro Vite cross into the box 10 minutes after the restart, then Vite himself crashed a 20 yarder off the crossbar just past the hour mark as the ‘Caps pushed to find the equaliser.

But any hope that Vancouver had for getting back into the match were extinguished in the 75th minute when Lewis added some more nails to the Whitecaps coffin, collecting a cross field Jack Price, taking a touch before powering past Luis Martins and blasting high past Cropper from a tight angle at the near post.

There was very little to test either keeper for the remainder of the match, which the Rapids saw out with ease.

The win moved Colorado above Vancouver in the standings, who in turn fell to 11th in the West, nine points back of the playoff line with four games left the play. It’s really all over bar the shouting now and it will be interesting to see how Sartini approaches these final four games.

Whether he’ll be in charge to oversee the needed offseason rebuild is just one of a number of questions that will now be at the forefront of the next few weeks.

“It’s that period of life, where you do, you do and you don’t find the goal. A good save from their keeper, then we hit the bar, the other team scored a fantastic goal with Lewis, where we tried to limit the team but we actually didn’t. I think we started well, we scored, they tied with a fantastic goal to be honest. Second goal, even though I know there’s a lot of polemic about if it was a penalty or not, I was more angry because we didn’t defend it in the way that we should defend. Then in the second half we were down and we tried to score but even in the first half actually, we were there attacking, the only thing that I didn’t like, we didn’t attack the space in the first half, we could have done more. We did much better in the second half and we had chances with Brian (White) and Pedro (Vite) to tie the game. Then at the end of the game it became a little bit more open, not even a counter attack because we were set. It was a fantastic goal. It sealed the win for them so yeah. Disappointed. But I told the guys we need to reset immediately in three days. We have to play at BC Place, a big game against the Galaxy. We have three games at home and we need to honour this game. Winning these games in front of our fans. That’s it.”

On changing the game plan in the second half:

“Not too much in the sense of the plan. We keep playing in the same way with the same system with trying to be aggressive and it’s more of the fact that I think in the first half we had the chance to score more goals. We made the wrong choices when we played the ball in our feet instead of playing the ball in the space, where there were players, as you can see from the first goal. I think that was the remark at the end of the first half. The thing that changed the game was the third goal at the end of the last 20 minutes of the game, where it became almost impossible to score goals. We tried again with the fact that they were leading 3-1, but it was very hard to come back from.”

On the current locker room mood:

“It’s obviously disappointing. It’s been a rough stretch recently and especially with the season coming down to the end here and we didn’t get points for making the playoffs. It’s now or never ever. Obviously it’s a disappointing result but there’s still games left to play and there’s still a chance so we have to pick ourselves up, dust ourselves off and be ready for Wednesday because it’s going to be another big game in front of our home fans. So we just have to be ready for it and do everything we can to come out and get the points at home.”

On the end of the season stretch:

“At the end of the day, we’re all professionals, whether we’re playing for the playoffs or not, we’re playing for pride, we’re playing to represent this club, to represent ourselves, our families. So we have to come out and give everything we can every single day in training and in every single game. That’s what it takes being a professional. We have to prove to ourselves that we are a good team and we are good players to the very end. So we have four more games to do it regardless of playoff situation. We’re going to come out and give everything we can to get three points and prove that we can win games.”

“I thought we played well enough to deserve to win. The engagement from start to finish I thought was excellent, and as a result, even when we gave up a soft goal against the run of play, it didn’t change anything. I felt like the guys’ mentality was really good from the beginning and as I look at the result tonight, I think that that’s a big reason as to why we won, is that I thought their mentality was excellent from the beginning and very focused and very engaged. That’s really all we can do at this point is try to take care of what we can control and the only thing we can control are our games.”

“Yeah, it’s great to have Jack [Price] back. He’s a calming influence. He’s a very intelligent player who has played a lot of games for this team and has a very subtle understanding of what we need when we need it. Having said that, I thought Felipe [Gutiérrez] was very, very good and it’s really exciting to have Jack back because I think it just adds so much more not just quality, but also depth to our midfield. It’s certainly a nice situation to have Jack come back and I think he helps us in a number of different ways. So, we’re certainly looking forward to him remaining healthy.”

“Yeah, I felt like that was more of us, what we’re used to, especially here at home. Going a goal down, it wasn’t easy to rally and get back in front. I thought all the lads did a great job before I came on and I thought we, after that, once we got the second, that we could have had three or four. I thought we should have probably killed them off a bit earlier, but then obviously we get the third goal and I thought it was pretty good. The game management was good. You know, we controlled it side-to-side. I still think we could have been a bit better at times instead of trying to go for that fourth, but no, happy, happy. Really proud of the boys tonight and you know it was a big win and we’re still in touching distance.”

On his return from injury tonight:

“Tired, it’s been awhile. No, but seriously, it felt fantastic to be out there. This year has been a bit tough this year. I’ve had a few injuries here and there, but no, it felt really good to be out there. Just, you know, feel the competition, feel a tackle, a header, you miss that sort of side of it. It’s like the stuff that you don’t think you’d miss but you do, and then obviously to win, even better.”