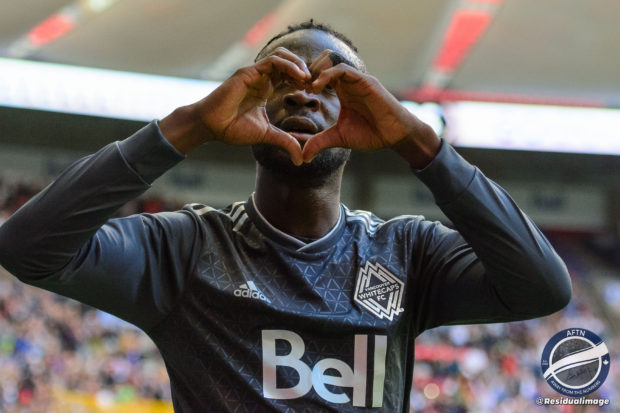 Always expect the unexpected with this Vancouver Whitecaps team this season it would appear. A 2-1 win in Toronto boosted their own, albeit still slim, playoff hopes while ending those of their Canadian rivals, but it wouldn’t be the Whitecaps Way if they didn’t make things difficult for themselves along the road.

A first goal in over five years for Russell Teibert gave Vancouver an early lead, and despite Toronto turning up the pressure, Gregory van der Wiel’s red card looked set to see the ‘Caps in the driving seat. Instead, former TFC man Doneil Henry gave up a penalty that allowed Jozy Altidore to make it game back on, but the Whitecaps finally claimed all three points with Kei Kamara’s 14th MLS goal of the year.

With a first full week of training with the squad, Craig Dalrymple made two changes from last week’s side that lost heavily in LA, bringing a now healthy Brett Levis back in to left back, and the suspended Yordy Reyna returning to sit behind Kei Kamara in a 4-1-4-1 formation.

After their heavy Canadian Championship defeat just a few weeks ago, and with both teams fighting for their already fading playoff lives, no-one was quite sure what to expect from the ‘Caps in this one, but I’m not sure anybody would have predicted how things played out from the off.

Vancouver looked up for this from kick off and they took the lead just four minutes in from the unlikeliest of players, as Reyna played in Teibert with a no-look pass and the Canadian international coolly fired past Alex Bono to grab his first MLS goal in over five years.

The ‘Caps were looking comfortable, and dangerous going forward, with their pace causing a few problems for TFC, seeing them pick up a couple of yellow cards by half time.

But it was the home side who had all the main goalscoring threats for the remainder of the first half.

Sebastian Giovinco had a long range shot saved by Stefan Marinovic in the 14th minute, then two minutes later Lucas Janson had a huge miss when he was superbly played in by a Justin Morrow square ball but fired straight at Marinovic from six yards out.

The only other real chances came two minutes before half time, with first Giovinco looping a ball into the far post, which Marinovic had to scramble to tip over, and then Michael Bradley forcing a strong save from the Kiwi keeper from with a fierce long range strike from the subsequent corner.

TFC looked to have had a bollocking at half time, and with their playoff aspirations hanging by a bawhair, they took the game to the ‘Caps after the restart.

Giovinco, who was starting to cut a more frustrated figure with every passing minute, fired into the side netting in the 52nd minute after a quick break. They came even closer minutes later when Auro showed some lovely fancy footwork in the box, but when he did finally get off a shot, it was deflected for a corner by the outstretched leg of Jake Nerwinski.

Toronto’s task was made all the more difficult though when they were reduced to ten men in the 67th minute after van der Wiel picked up a second yellow for a stupid, lazy challenge on Yordy Reyna on the edge of the TFC box. A sending off was certainly coming, but the nature of it will have frustrated Greg Vanney all the more.

But instead of giving the ‘Caps the upper hand, their old nemesis Dr Defensive Disaster raised his ugly head, or rather arms, as Henry slid in like a wavy man at a car dealership to try and block a Jay Chapman cross in the box in the 72nd minute. It was a clear penalty and Altidore made no mistake from the spot.

The equaliser gave the home side an initial bit of momentum, but the ‘Caps easily saw that off and took the lead in the 78th minute when Kamara sidefooted home a perfectly place low Jordon Mutch cross from the edge of the six yard box.

Kei Kamara puts the 'Caps back in front. #TORvVAN https://t.co/TgIaYQa971

With very little of note happening in the remaining minutes, Vancouver easily saw out the match to claim which could yet be three massive points in their chase for the postseason. If nothing else, it keeps their season and belief alive, and it ends the season of a Canadian rival at the same time.

The Whitecaps still need some help if they are it to the playoffs. Three more wins should be good enough though.

For Toronto, it’s amazing to see last year’s treble winners’ spectacular fall. To go from winning all the domestic marbles and nearly bringing home the CONCACAF Champions League, to not even making this year’s playoffs shows that something is seriously wrong out east. No matter how tough their start was, a squad with that talent, and salary, not making at least sixth is incredible.

For Vancouver, there’s three cup finals left. Can they do it? It still feels like a long shot, but sometimes the outsiders come in.

What are your thoughts on the match?

I thought we deserved it, we built on performance over the last week, corrected some things that we knew we could do better and we executed. I’m really proud of the boys because they believed, came in at halftime 1-nil up and they still weren’t happy. They wanted more and wanted to fix a few things that just weren’t quite right in the first half and they did to fight for the win.

Can you talk about the play with Russell today popping in a goal?

Yeah today he was playing in front of his family and friends, that’s the first time he’s scored in a few seasons now so he deserved it. What a great penetrating run, great first touch and we see that a lot in training and it’s now come alive during the game so I’m proud of him.

Can you talk about the partnership between Reyna, Aly and Russell?

Yeah I think we have a good balance right now, even the boys that came in Mutch and Felipe, they added something when they came in. Really balanced midfield and I think it frustrated Toronto a bit, and they looked out of sorts there for a bit of the game and we took advantage of that.

What was your overall thought on tonight’s match?

I think that match was the best first 10 minutes I’ve seen us play in a very long time, effectively that first 10 minutes won us the game and we managed to hold on through the second half even though we didn’t perform very well. But, we held on to the win for 3 points which is nice and I think we knocked TFC out of the playoffs, fantastic advantage after the Canadian Cup. I’m happy.

What was so effective about the first 10 minutes do you think?

Differently the way we pressed, I think it was unexpected for TFC, we won a lot of balls up front and Kai out in a real shift. A ton of pressure, caused a couple of tense moments on their side which in the end I think the constant pressure lead to the first goal.

Congratulations on the goal tonight, what did you make of the play?

Yeah I still haven’t even thought about it again, I just saw my family in the stands after and that’s all I really remember from that. It’s super nice to score a goal, let alone score a goal in front of my family and friends in my home town.

What was your overall thoughts on the battle tonight?

Yeah it’s a good place to come and take points no matter what time of the season it is. We knew the implications of this match and what was at stake. Fortunately for us we got the result here tonight, we got a good performance, probably one of the best we’ve had all year long. Especially coming out of the gates, this puts us right back in a playoff contention.