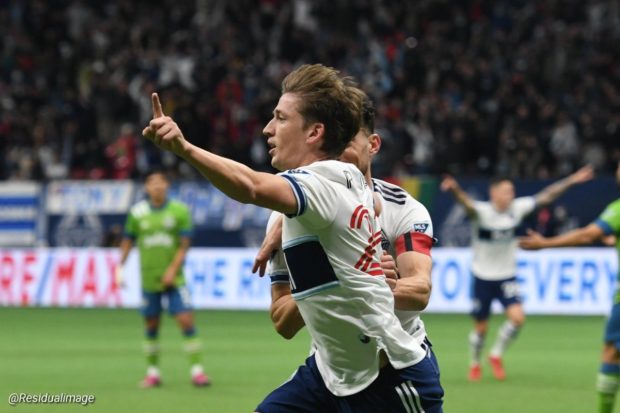 An equalizing goal in the 20th minute from Ryan Gauld, cancelling out Fredy Montero’s early penalty, and a last minute save by Max Crepeau helped Vancouver Whitecaps earn a point in a 1-1 draw with the Seattle Sounders and punch their ticket to the MLS Playoffs for the first time since 2017.

Needing a win or a draw to reach the postseason, Vanni Sartini made two changes to the Whitecaps starting line-up from the midweek draw at LAFC, with Ranko Veselinovic in for Erik Godoy in the backline and Cristian Gutierrez in for Bruno Gaspar.

Brian Schmetzer made four changes for Seattle, with no Raul Ruidiaz and Nicolas Lodeiro for the visitors being a huge boost for Vancouver.

The opening minutes saw the ‘Caps begin on the front foot but a handball called on Cristian Dajome led to Montero converting from the spot in the 8th minute.

There was not a long wait for the sold out crowd to see a response from the home side when Brian White rose to meet a Gutierrez cross. The ‘Caps striker took a heavy cut to his eye in the process but any pain was made sweet by him having headed it on towards Gauld, who met it superbly to head it in himself of the post and send BC Place into raptures.

With just over 10 minutes to go in the opening half Crepeau kept the Sounders from re-taking the lead scrambling to get in front of Cristian Roldan and deny a goal.

The second half started with the ‘Caps looking to take command of the match and came close in the opening 10 minutes as White had a free header in the six-yard area but sent it wide of the net.

Vancouver came close in the final ten minutes when Freddy Montero cleared Vesolinovic’s header as it was on its way inside the post.

The final moments almost saw the playoffs escape from the Whitecaps’ grasp as the ball was loose in the box and a couple of Sounders came close to getting their foot to it before Crepeau was able to gather it up, sparking a melee after Xavier Arreaga kicked out at Florian Jungwirth.

With the result on the final day, the Whitecaps ended the season picking up points in 20 of their last 22 games (10W-10D-2L) and booked a place in the playoffs by a point, finishing in 6th place. Quite remarkable considering what they have been through this year and where they were, bottom of the West, in August.

After the international break, Vancouver will return to the pitch as they travel to Kansas City to take on Sporting and attempt to duplicate a similar run in the playoffs.

On reaching the playoffs: ​

“I think we did a miracle. Pure and simple. And we’ve been fantastic. And I’m not talking about only my time in charge. I’m talking even before. If we went to the playoff, it’s also credit to Marc Dos Santos and Phillip Dos Santos that were here before because the team was already improving a lot. The team was starting to win. And so it’s their win too, not only the win that we’re here now. You have no idea, to stay in Salt Lake for a lot of months, we’re away from home. And it’s been fantastic, in the last 13 games, 14 games when I’ve been in charge we made 26 points. And today, if you look at the game today, in the last five years of MLS, we looked [like] Seattle, they looked [like] the other team. We looked a strong team, they’re happy to get away from BC Place with a point, because not so many teams can come here and make points because we are a very good team but also because we put everything and it’s a testament to the work of everyone, from the medical staff, to the performance staff. We fully deserve it.”

On the fan’s support:

“It was fantastic. You know, that’s the reason why we do this thing, it’s to share the beautiful moment with the fans and to receive from them the relation and to really have a fantastic moment with them and it’s also our way to thank them. If we are in the playoffs, the fans played an enormous role. Because if we weren’t able to play here in front of our fans, we wouldn’t have done 22 points at BC Place in nine games, so we owe it to them.”

On the feeling of reaching the playoffs:

“I’m super happy, losing my voice a little bit, but super happy. We come from far and we can’t forget the fact that we were in Orlando, Portland, Salt Lake then home, we can’t forget about that and so we come from far, ever since we got back to Vancouver, we played home at BC Place, the team really pulled together, and this team never gave up so I’m really happy at the moment. I’m happy because, on the field, we’ve been through a rebuild, and year three we’re above that line. You know, 2019 was not good enough. 2020, we were cut short and then 2021, we’re above that red line. So it’s positive after three years only of rebuilt. It’s great. It’s really good. I’m happy. I’m happy for the organization.”

On the last-minute save:

“It was a play that it’s like, it’s not a clean play and it bobbles a little bit, ball’s loose. Someone got on the end of it and I have to throw my body in the way and then from there, Flo gets kicked and obviously it escalated. You know, tensions are high, especially at that time of the game. But I’m happy that we had a tie and the goal tonight was to be in the playoff spot at the end of the 90 minutes plus so we have a two-week preparation ahead of Kansas City.”

On the locker room:

“Yeah, I would say it’s like the closest changing room I’ve been in. Everyone gets on with everyone. Everyone’s wanting to fight for each other. It’s a great change room to be a part of, that definitely helps you out on the pitch. When there’s times when someone’s beaten, another boy’s there to help you. So I think it’s been a huge, huge factor in us putting together good results and managing to get into the playoffs.”

On scoring the key goal:

“It doesn’t matter that was me that got the goal, the most important thing was the team getting the point that we know we needed, going into the game knowing we needed point… I mean, obviously, it’s good to score the goal, but that’s not the most important part, it was the job of the team. You know, us getting into the playoffs, hopefully that’s just the start for us. We don’t want to carry on and two weeks time be going home. We need to be going to try and get through the next round. So you know, the team always come first and that thought is really through the team.”