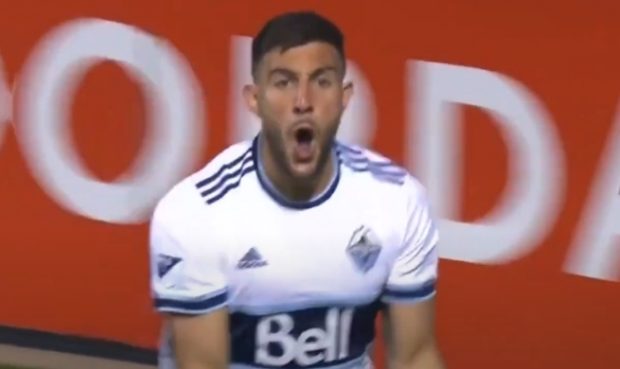 A new season. A new home. A new hope. Major League Soccer is back and for Vancouver Whitecaps it was very much back with a bang in Utah on Sunday evening.

An early second half goal by Lucas Cavallini would be the difference in the 2021 MLS opener for the Whitecaps against their Cascadian rival Portland Timbers.

After a first half that saw some flutters and miscommunication in the Whitecaps defence, a shot cannon off the crossbar, and some strong Timbers pressure at times, Vancouver dealt with everything that was thrown at them, launching some attacks of their own in the process, as the two foes headed into the locker room goalless at the break.

But the parity was to last just four minutes into the second half before Cavalini converted an inswinging corner from Christian Gutierrez, rising unchallenged to send a bullet header past a helpless Steve Clarke.

The goal came after a close miss from Andy Rose who sent his attempt off the post before Clarke was able to clear the ball over the bye line to give away what proved to be the decisive corner.

Portland pressed to try and get back onto level terms, but overhit crosses, resolute defending, and throwing Whitecaps bodies on the line to block anything in their path combined to keep the Timbers at bay.

It looked as though the ‘Caps had doubled their lead in the later part of the match, but Cristian Dajome’s effort was cancelled out by VAR, setting up a nervy finish, but one which Vancouver saw out quite comfortably in the end, holding onto the victory and the full three points to open the season.

With everything the Whitecaps have gone through to even get to this first game, the result showed the fighting spirit and self belief within the ‘Caps camp this season. Having families close at hand has helped many of the players feel comfortable and at home away from home and the atmosphere in he squad seems very strong and positive.

For a team missing starts and some key pieces it was a very promising start to the new season. It certainly wasn’t flawless, and the makeshift defence caused concern, but it’s a strong building block that hopefully sets some strong foundations for the rest of the season to come.

Thoughts on the win:

On the identity the team played with:

“That’s what I’m very pleased with. Regardless of who’s on the field we have to have an identity and have to have a way to go about things. I don’t think that defensively we struggled until more or less the 60th Minute. There was normal plays there in there but after the 60th minute there’s plays where we were a little bit stretched. Portland was able to play in between our lines. Our lines from the back four to the forward started to get stretched and our block wasn’t as compact as we needed to be, but you know I have to evaluate tomorrow how we felt physically also. With a first real game I have to evaluate why at the minute 60-65 we started to struggle. But like you said, at the same time we looked always in moments that we could have been dangerous in some counter attack situations because of the profile of the players we have, and that’s the direction we want to go as a club.”

“Cava we all know he’s in a good moment, and he’s able to have these moments. It’s a player with quality and when he’s confident, he’s a very important player for us. But, you know the highlight of the goal for me is our staff. When I mean our staff, our analysts – Luke [Summers], Drew [Foster], Phil [Dos Santos]. All the guys that work hours and hours on set play situations. They’re very dedicated on those moments and they spend a lot of time, so that goal was very well worked, and it was trained, and it was a good play. So it’s important for the team. It’s important for our work every day, and it’s important for Cava.”

On what the ‘Caps showed tonight:

“A lot of belief and courage. I mean, it wasn’t the prettiest game that we’ve had. It’s the first game of the season, Portland has been in form playing competitive games already. We’re a team. We’re a humble team and … we’re always going to be going hard until the last minute.”

On the offensive cohesion:

“Today, there were two different games – before the goal, and after the goal. The way we’ve been playing during the preseason was similar to after the goal. The linkups, the confidence, the possession – that’s the identity for this season. With this win, that could translate to the next game.”

“As a striker, scoring goals always boosts your confidence. Not only that, the extra shifts, putting in the work for the boys, the pressure, not making them attack our lines easily. The goal was extra but our effort today was outstanding, so I was happy with the result and the team effort today.”

On how the game changed:

“It took us a while to find our shape. At one point in the first half, it was frustrating for us. We were all frustrated, we just couldn’t get our timing properly. After the goal, it was completely different. We ended up getting our adrenaline. This is a team we need to see. Hopefully this week, we work on a lot of things, a lot of errors we had. So, hopefully next game we will get better.”

On the mood of the team after the win:

“The group is really tight. We know the reality of this group, this organization, and everyone is committed to work hard, to commit, to show up every day and put the hours, put the effort. Then it shows up on the weekend. Talking with the media, I said we’re going to be a team that is difficult to beat because we commit, we commit to work together. And even if whatever happens on the field, if there’s moments that we don’t have the, ball that we have to ball, whatever happens we’re tight, we’re together. And so that’s the result of it tonight.”

On returning from his injury, and defending as a team:

“To be honest, my hand is back. I don’t even think about it and that’s been months, so since January there’s absolutely no concern. I’m back, so that’s good. And then, as a team defending it’s a collective effort from our number nine, Cava today, to me. The 11 guys were committed, once again. And so, it’s a collective effort and that being said everyone worked through and pulled through to cover for each other when we were beat. And at some point we won a lot of 50/50s today, so we got to work together as a unit, 11 men were committed, and, again that’s the real tough thing to beat a team when the 11 men are committed.”

“Like you said at the beginning, it seems like we might have had things going against us. We didn’t want to look at it that way at all. You know we’ve been training hard for two plus months now. We may have not had all of our players, Portland may have had two competitive games before us, they might have come in a little more sharper. But we made an emphasis not to make that an excuse for us at all. We knew we wanted to come in, what we wanted to do. And I think we executed it well, and to get three points and a shutout in our first game, it’s huge for us and that’s a good thing to build off from great momentum.”

On predictions from pundits:

“I think most of the guys, we see that. You know some guys that feel that, some guys don’t even look at it. I think, since the five years that I’ve been here, I don’t think anyone has ever picked us to go to the playoffs, or to do well. So you know what, we come out today, we beat the team where all these guys are saying they’re going to be the MLS champion, going to be the Western Conference champion. We come out, we play really well, we play really strong, we get a shutout. And you know we could have had two goals. I think it just shows how strong this group is, and how strong it can be when we have everybody here. So it’s something that, yeah, it’s in the back of our heads a little bit, but we just need to make sure that we’re doing what we need to do on the field, from the training pitch.”