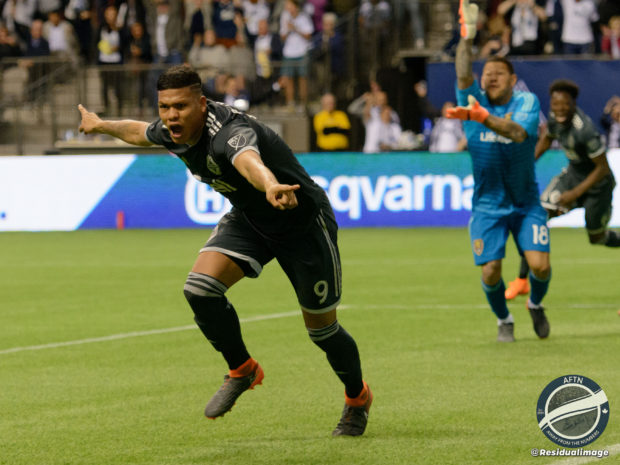 While it may have seemed a long shot for the majority of the match, the ten man Whitecaps were able to break their three game losing streak by defeating Real Salt Lake 2-0 at BC Place on Friday night.

The breakthrough came with 15 minutes to go as Cristian Techera was able to convert a penalty that was called when Nicolas Mezquida was brought down in the box. Unfortunately, the joy was short lived as ‘The Bug’ seemed to forget that he was already on a caution and took off his kit in celebration, earning him a second yellow and an early trip to the showers.

It seemed like the home side would be under pressure for the remainder of the match, which they were, but the ‘Caps were able to get some breathing room after Anthony Blondell tapped in a pass from Alphonso Davies four minutes later to seal the three points.

Prior to those goals it was RSL who dominated the majority of the match especially when it came to the stats, with the home side only managing 31.2% possession.

Vancouver did come up with some chances in the first half but they either missed the target, pr players were unable to get a shot off or had their attempt blocked. The best of them fell to Blondell who raced in on goal, rounded Nick Rimando, but saw the ball just nudged away as he was off balance and unable to get off a shot on the gaping goal.

RSL came close a couple of times in the opening half as Corey Baird hit the bar from distance and Marinovic was able to tip the ball over from a shot by Joao Plata.

At the hour mark Brek Shea was left alone outside the six yard area but his first time volley bounced of the turf and went off the bar took a odd bounce and went off the post before being cleared.

Aly Ghazal forced Rimando into a save a few minutes later when his volley bounced off the turf as well and looked to be heading into the net before the keeper was able to push the ball into touch.

The two goals came soon after and Vancouver were able to close out the game to claim all three points and move temporarily into second place of the Western Conference.

The Whitecaps will hit the road to the “Land of 10,000 Lakes” as they attempt to keep the new winning streak alive against sophomore Minnesota United. Keeping all their players on the pitch would be a start.

On getting all three points and scoring two goals in the second half:

“Prior to the first goal it wasn’t going our way, we hit posts and missed chances, going around goalkeepers, but we kept at it and there was a lot of character shown out there today by the group which was important. I know we’ve got a good group in there and what we lack in quality sometimes we make up in spirit and I thought the last thirty minutes showed what we are about.”

“I thought he was excellent from the first few minutes, I wish he would have got a goal then because I think you’ll see a very confident young player, but it was pleasing that he got a goal later on, that was a reward for the hard work he put in during the game, and if you put the work in you get the rewards and I’ll keep saying that to you as he deservedly got his goal today.”

“I’ve got trust in my players. You don’t become a good team overnight, and you don’t become a bad team overnight. We’ve been wounded a little bit the last two weeks because of our performances, we’ve been slightly off it. We’ve been a little bit ill-disciplined, because we’ve not kept eleven men on the field. We can’t do that. You see the results all over the league if you lose a man it’s very difficult. You saw that again today. He’s got to keep his shirt on, he knows that. He’s emotional, it’s a good penalty against his favourite team that he likes scoring against. And we’re down to ten again. [But] good response from the guys.”

“Anthony is a strong guy. He can hold the ball pretty well and he has a great strike, but I think when he has more games he’s going to feel more comfortable and obviously he will be at 100 per cent.”

On getting all three points:

On Davies and Mezquida’s performance:

“Nico came with great energy, he came and defended well and on the attacking side he did what we needed him to do. Alphonso with his quality and speed, nobody can stop him.”

“It’s important. But, to be honest, today if we had conceded it wouldn’t matter as long as we were getting the three points. But having the clean sheet feels better.”

On going down to ten men:

“We played against eleven with nine men, so for us this is nothing new.”

On training this week:

“We felt frustrated with the recent results because we have worked hard and results didn’t go our way, but finally that changed. This win is for us and for the coaches because they give us everything they can, and obviously the fans that always come to support us.”

On making his first MLS start:

“It felt great. I had a few unfortunate injuries in preseason. But all in all, now I’m fit, I’m healthy, I’ve been training really well the last month and a half or so. I’m grateful that I got the opportunity and it’s just nice to be back out there again.”

On not being used to playing that many minutes for a while:

“Honestly I felt great, minus [when] I started cramping a little bit which is a problem I’ve had throughout my entire career. I don’t know if it was nervous cramps, I don’t know what it was. Other than that I feel great, and I just have to get used to the pace and the speed of everything, and I think that I’ll be able to get through 90 soon.”

On advice for young Saskatchewan players:

“I get this question a lot. It’s such a simple thing, but just keep working at it, no matter what. You’re going to hit obstacles, I’ve hit tons throughout my life. The biggest thing is to just not quit and continue doing what you love, and keep pushing. Set goals for yourself and try to reach them, and when you reach them set more. Don’t get down on yourself, because everybody goes through these obstacles and these tough times in their lives. If you dwell on it you’re not going to get anywhere, so just continue to push forward.”

On his emotions from the journey:

“I was actually kind of thinking about that earlier today and last night. When I figured out that I was starting, they were kind of up and down throughout the day. It wasn’t until I was walking out to the pitch and we were standing there singing the anthems, and I was just thinking to myself that this is something that I’ve always wanted, this is something that I dreamt about when I was a little boy. There wasn’t a single other thing that I wanted but to be a professional soccer player, to play in front of fans, to have little kids and young people look up to me, that’s all I ever wanted and I was just so grateful and happy that I got that opportunity. And again, obviously with us winning it was even better.”

“It’s a cruel sport sometimes. Carl and the Whitecaps have been going through some rough times over the last few games. I’ve certainly been there, with not only RSL in my career. They were bound to come out of it some time, and we of course didn’t want it to be against us. That’s the way it works sometimes. But I’m very happy and proud with the way my team played for three-quarters of the game. But at the end of the day we didn’t put the ball in the net.”

On the play of the young kids on the backline:

“I mean not only them defensively playing well, but just the calmness they had on the ball tonight is something that I know they all had it in them, but we haven’t really seen, just in bits and pieces throughout the season. To come up to a difficult place like this, where we maybe had one result here ever, and to play like that is something positive to take out of this loss for us.”

On if fatigue was a factor:

“No. Look they were just as tired as us. Definitely no excuse there. I think we just need to be a bit more selfish when we got into the final third tonight, a bit more clinical on our shooting and our placement. Overall though, besides that, they did well.”

“They sent in a cross, I took a little heavy touch. Personally, I thought I nicked the ball and he ran through me. They called a penalty and didn’t take a look at it, that’s what they thought, and that’s how it goes sometimes. Sometimes you just don’t get the call.”

On the second goal:

“Davies came in and was fresh. He’s a dynamic player who uses his pace. He sent in a shot that went wide and had a guy who was in the right place to put it in.”

On what they can take from this game:

“We can be pretty positive. Like I said, overall it was our best performance of the year. We didn’t get any points out of the game, but we can definitely build on how we played, especially the first forty-five minutes.”

“I thought we played really well, we can keep our heads up with this loss. We just can’t keep giving up those penalties, every time we give up a penalty this year we’ve lost the game. All in all, I thought the performance, in an away game, in the circumstances that we were in, I thought we played well. If we continue to play that way, we will be going in the right direction.”

“We studied their players, where they go and their tendencies. Is he going to the right or left, I guessed wrong on this one.”