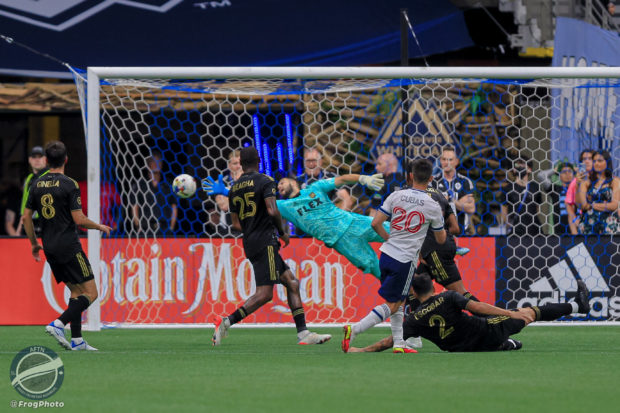 We keep saying it. You simply can’t leave BC Place early this season. Vancouver Whitecaps have become experts at grabbing points at the death and they did it in some style on Saturday night with Andres Cubas’ 89th minute winner from the edge of the box being all that separated the ‘Caps from the Western Conference leading LAFC by the end of it all.

The 1-0 victory was no more than the Whitecaps deserved for their play in the second half and moved them to within touching distance of the playoff places as they began the second half of their season.

Vanni Sartini made two changes to the team that played out a 0-0 draw last time out, moving to a 3-4-3 formation for the first time this season.

On paper the front three of Lucas Cavallini, Ryan Gauld, and Brian White looked a hard to handle proposition for the visitors, on the actual BC Place turf, not so much.

The Whitecaps simply weren’t an attacking threat in the first half, mustering no shots on target and just two in total.

LAFC weren’t much better. They had no shots on target either from their four attempts but at least they had the one highlight of the first 45 minutes when Latif Blessing crashed a 20 yard effort off the bar in the 12th minute.

Both sides made a change at the half in an attempt to change things up. Vancouver’s saw Cavallini replaced by Cristian Dajome, a sensible decision in the grand scheme of things after the ‘Caps DP picked up a harsh yellow and the LAFC players were in the ref’s ear looking for a second every time he had any contact with a player.

One of the pre-marked villains of the night, LA keeper Max Crepeau, was finally called into action just past the hour mark. First bringing cheers when he flapped at a ‘Caps corner, then bringing jeers when he recovered to make a great save from a stooping Tristan Blackmon header.

If any team was going to break the deadlock, it felt like it was going to be Vancouver, and White nearly did in the 75th minute when he crashed a fierce shot off the near post from the tightest of angles.

The breakthrough finally came in the 89th minute and it was the Whitecaps that deservedly got it.

Cubas blocked an attempted LA clearance on the edge of the box, took a touch to set up a shot, and buried a beauty into the bottom left corner.

ANDRES CUBAS puts one away LATE to give #VWFC the lead!💥 pic.twitter.com/lhDEERljlq

That was to prove to be the difference make, with Vancouver easily seeing out the remainder of the match and claiming an important three home points that moved them level on points with the team sitting in that 7th and final playoff spot in the West right now, the LA Galaxy.

Tonight’s match marked the start of the Whitecaps second half of the season. They’ll be hoping the rest of it goes as well.

“I was very happy. I actually was getting the perspective from my bench, it was hard to see if he scored or not. I was very happy, Andrés scored a fantastic goal but again, we deserved it, Brian hit the post, we were always in the box, a couple of times Maxime lost the ball in the air and it was kind of a scrum in front of the goal. We know how it works, we know their quality, I was very, very scared of their counter attacks, but I think Rusty and Andrés did a fantastic job protecting the back three.”

On the team’s form:

“I think it’s because of three things. First of all the players, they believe in what we do when we push. Second, a huge shoutout to our performance department. I think they’re not mentioned too much. Jon Poli is our head of fitness preparation and all the people he works with, not only on the fitness staff, as well as the physio, they allow the players to be always on top of condition to the end. And then third shoutout to the coaching staff because doing rotations and playing everyone makes it so we always have players ready at one hundred percent.”

“Yeah, it was incredible, it was his first goal here at BC Place, in a tough match to put us up at the end. He’s a big player, with the last few games, what he can bring to the team and he’s going to be really important for us.”

On what Andrés Cubas brings to the team:

“He creates so much space for us, as a centre back like myself, always being able to find him, he moves around a lot, it helps us a lot for sure. Especially in transition as well as going forward, he’s very good on the ball and he springs guys forward and creates space for us.”

On how his goal was played out:

“I stayed in that position at the top of the box. I thought the player would angle a pass to my right so I made the movement to intercept the pass. As soon as I got on the ball, I knew I had to do something with it. I saw the opening in the angle of the goal and thankfully it all worked out in the end.”

On what being in the club has been like:

“Very good, very good. Since day one, all the South Americans helped a lot since we speak the same language, from the first moment they asked what I needed. If there was any favors or if I had any questions that I needed asking. And the entire roster as well has welcomed me really well, that’s all been super important and I’m super grateful for the way they’ve welcomed me into the team. Also, the entire club, whether that be my teammates, the staff, the front office, anyone in the club has welcomed me super well so I’m extremely grateful to everyone around the entire club for welcoming me so nicely.”