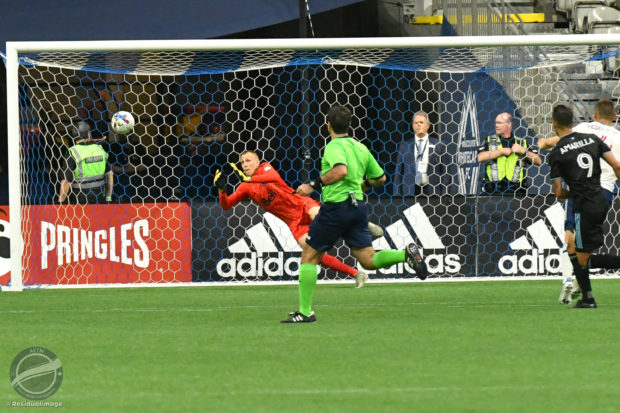 The last 10 games have seen Vancouver Whitecaps on something of a tear. The in-form team in all of MLS and late, late show specialists. But despite it all, questions remained. How sustainable were those late wins? Is this a good Whitecaps team, a fighting one, or just a lucky one? And when it came to real crunch games, would they still be able to get the job done?

We’re still not likely to get a proper answer to any of those questions for months, especially with the injuries continuing to wrack up and prevent the Whitecaps from actually getting their best team on the park. We simply don’t know whether this is a good, playoff bound Whitecaps team or not. What we can say is that they’re certainly in the conversation and they had a great opportunity to make further strides towards claiming a postseason berth when one of their nearest rivals for a playoff place, Minnesota United, came to to town on Friday night.

Level on points, and with an identical record, this was one of those matches that the Whitecaps badly needed to win, and for three quarters of the game things were going great. Lucas Cavallini had headed the ‘Caps into a 66th minute lead, but a late capitulation saw them give up three goals in the final 19 minutes of the match and the visitors left with a 3-1 victory, three huge points, and vaulted themselves into 5th place in the MLS Western Conference standings.

This could and should have been Vancouver and may prove to be one of those ‘what if?’ games you look back on at the end of the season retrospective where you try and pinpoint where things went wrong. That we’ll need to wait and wonder on for now.

Vanni Sartini made three changes for this one from the team that saw off league leaders LAFC last weekend, and it didn’t really seem to matter who was on the park, the same story as the last couple of home games played out once again in a goalless first half devoid of any real goalmouth action.

Minnesota started the stronger but after seeing out those first few minutes on the back foot, Vancouver took over the play, looked the better team, but didn’t look like scoring. Was another tight game going to be settled by a late goal? As it turned out, yes, but with a twist.

The second half was certainly more entertaining and Emanuel Reynoso nearly gave Minnesota the lead a minute before the hour mark, dancing to the byeline before crashing a sublime shot off the bar from the tightest of angles.

A close call for the ‘Caps but then they had one of their own five minutes later when Ryan Gauld pinged one off the right post from just inside the box.

That frustration soon turned to joy when Cavallini did open the scoring for Vancouver three minutes after coming on as a sub, heading home a pinpoint Pedro Vite cross from just outside the six yard box.

#mnufc with a quick response!

It was to prove to be a short lived lead, five minutes in fact, as DJ Taylor found a wide open Kemar Lawrence at the back of the box and he volleyed home the equaliser, ending Cody Cropper’s shoutout streak at 342 minutes.

Then the wheels came off for Vancouver.

Luis Amarilla put Minnesota ahead in the 84th minute with a lovely low strike into the bottom left corner after Jacori Hayes pounced on some sloppy play from the ‘Caps in their own half and the visitors sealed the deal, and the three points, four minutes later when Franco Fragapane got on the end of a long ball forward from Minnesota keeper Dayne St Clair, took a touch inside that left Jake Nerwinski on the deck, and fired home past Cropper.

A tough home loss, the Whitecaps’ second of the season at BC Place. They’ve dropped 12 points now from their 10 home matches. That’s not going to get you into the playoffs, and especially when you give all three to one of the teams challenging you hard to get above the playoff line.

You can’t begrudge Minnesota the win. They were simply the far better team after the first goal went in. But maybe that was the Whitecaps downfall – they scored too early. They’ve only had to see out a few minutes with the lead of late. Twenty plus minutes was clearly too much.

They need to regroup and quickly. They have two tough road matches coming up at Cincinnati (who’d think we’d be saying that) and Portland. They could finish this weekend in 11th in the West, still just three points off the playoff line but with a lot of traffic ahead of them. Every point is crucial in the West this year and the Whitecaps just threw away three big ones.

“I think it was an even game, we had half chances in the first half and they had chances. We were doing well. We were very compact and we could have done maybe more offensively but we were doing what we were supposed to do. Then in the second half, the game became a little bit open, but in a way that you know the first half we conceded I think a chance on a corner second ball, and Reynoso made a great play when the he hit the ball, and then we had the chance when Ryan hit the post, so it was a pretty even game. We were trying to attack more behind the line and we were having a little bit more space and that’s the reason why we scored. After the first goal actually, instead of being fuelled by the goal, we dropped a lot. We couldn’t sustain the pressure. So we dropped a lot and you know, in one of these plays, we were going a little down…That’s the reason why I made the two changes in the second with Tristan [Blackmon] and Tos [Ricketts], they are kind of more defensive suited players than Dájo [Cristian Dájome] and Pedro [Vite]. I thought that the point would be probably good. Maybe Tos would score off a corner or something. But after one minute unfortunately we made a big mistake on the second goal. We gave them the second, and the third goal was a big mistake. It’s a teaching lesson that if we are not at one hundred percent for 90 minutes, that’s the only way for us to win.”

On the opportunities created throughout the first half:

“Well it’s good. We had a lot of half chances. I remember the one with Dájome crossing inside. A couple of times we couldn’t break their line… I think actually we played well until we scored the goal. We didn’t press and when we were not pressing, we were dropping too much in our box and leaving them again wide open You do that against a good team and you’ll be punished.”

On positive notes from the loss:

“Positives tonight, I think that we played a good 60 minutes. First 15 minutes, we played a little slow. But once we got into the game we played well for another 45 minutes another 50 minutes and unfortunately after the goal, I think whether it was a lack of of energy, maybe just the lack of focus, you know, I don’t know, but we lost our footing in the game and unfortunately conceded three goals in the last 20 to 25 minutes.”

On what can be learned from the defeat:

“That we need to be a 90 minute team. The last seven or eight games at home we played very well, we’ve played well until the 95th minute. We scored goals in the 89th, the 90th, whatever it may be. Tonight, we were not a 90 minute team. I think the big takeaway from this is that we have to continue to play our game, whether on the road or at home, for 90 minutes because what we do is very effective when we do it. Tonight, like I said, like Vanni said, we were a 60 minute team, and unfortunately, that is a takeaway that we have to learn from.”

On learning from the defeat:

“I think we just keep running, we keep fighting. There’s no reset here. This is part of playing professional sports. This is why you need to play the game because there are ups and downs, there’s emotions involved. There’s highs and lows and this makes you want to get back on the field for the next game and get that result. Losing is part of playing the game, you can’t win every game. That’s what we’ll do, come back stronger for the next game.”