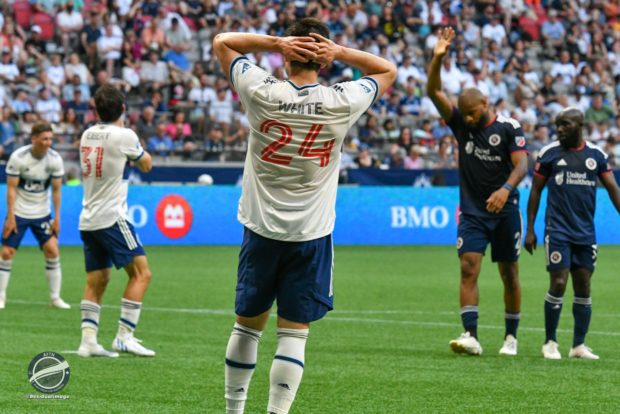 Not a classic is one way you could describe Vancouver Whitecaps’ goalless draw with New England Revolution at BC Place on Sunday. Whether it was the baking hot conditions or both sides just cancelling themselves out, chances were at a premium, and although the ‘Caps were much livelier in the second half and forced saves out of the Revs’ keeper, they couldn’t find the breakthrough and finished the weekend losing ground in the playoff race.

Vanni Sartini made six changes to the starting line-up that clinched a Canadian Championship berth on Wednesday, with all three Designated Players – Lucas Cavallini, Andres Cubas, and Ryan Gauld – getting the start together for the first time this season.

There wasn’t a lot to write home about in the early part of this one, but a potentially big blow for the ‘Caps was Deiber Caicedo carried off in some pain with a right knee injury just 17 minutes in, to be replaced by his countryman Cristian Dajome.

The first real chance of the game fell to the visitors in the 33rd minute. Carles Gil got the ball eight yards out in front of goal, tried some fancy footwork to make room for the shot, but tried to be too cute and his effort was blocked by Marcus Godhinho and the danger cleared.

But aside from a couple of half chances for both sides, that was about it. Whether it was fatigue in the hot conditions or both teams shutting the other down, it was a sluggish and less than exciting half of football.

As the second half got underway, the chances finally started to come for both teams. Leo Owusu had a shot from the edge of the box in the 52nd minute that forced a save out of Dorde Petrovic, before New England responded with two efforts from Dylan Borrero, the first of which crashed off the bar and the second brought out a save from Cody Cropper.

Gustavo Bou had a looping effort for the visitors that fell just wide, before Dajome forced a near post save from Petrovic and the Revs keeper was called into action again moments later to deny Godhinho.

It had been a long time coming but the action had now really started to pick up.

Cavallini flashed one narrowly wide just past the hour mark after a bustling run and then sub Russell Teibert had a dipping header that landed on the roof of the Revs’ goal.

Both teams had their half chances but the Whitecaps started to turn up the heat in the last 15 minutes, with Petrovic denying both Brian White, with a tip around the post, and then Cavallini with a near post save.

New England reminded Vancouver they were still a threat with a curling Gil effort that went wide and a long range Bou shot that was right at Cropper.

But neither side could find the breakthrough and had to settle for a point apiece. Important for Vancouver to get something from this one with results elsewhere this weekend, but dropping two points at home can seldom be seen as a great result. The clean sheet was a positive, back to back ones now, but the Whitecaps finish the weekend in a worse position than they started it, dropping to ninth and two points back of the playoff line.

Next up we have the return of Max Crepeau and Marc Dos Santos as the star studded LAFC come to town. You’d take a clean sheet in that one too.

“I think we played very well. I think we were the best team on the field. We created all the chances, we were in control. I think the only moment that we weren’t in control was the first 15 minutes of the second half. They played a little bit more than us. We did what we were supposed to do, the only two big big chances that they had was this shot from distance. It’s impossible to keep everyone at zero shots. Our chances have been in the box, two versus one against the goalkeeper, two plays on the line. Unfortunately we didn’t score and if you don’t score, you don’t win. I think it’s a game we can be a little bit frustrated. At the same time, we have to be also honest by the fact that maybe in the past those goals at the last minute of the game was maybe more of a tie than a win for us. Maybe it’s more of a win than a tie. I’m very proud and happy of how the team performed because again like this one, if you don’t score it’s easy to lose.”

On adapting the ball movement in the final third:

“I think there’s two ways that we have to analyze that. The first way I think is that in the first half, the movements in the box were off. I spoke with Cava, I said that he was drifting too far away from the goal, the box was empty most of the time, it was hard to find the final touch and the final progression to put us in front of the goal. That’s also one of the reasons why I put Brian in the second half to play with two strikers, so at least one of the two was always in the good position. It actually worked, so I’m happy about the second half performance. I think also that today wasn’t our day. If it’s not our day, it’s better today that we get a point than last Wednesday that it could have been penalty shots and not go into the final. So again, I’m happy because we’ve been the better team, against a very good team. We could have scored, a little frustrated, but we just need to practice more.”

On learning about himself each game:

“I’m still learning each and every day from my fellow teammates, from the coaches. I’m just trying to take each and every instruction and really try to do what they ask me to do to better my game. Because they have been there before me, they know what it takes to build a player. As I said before, I’m just taking whatever they say to me correctly and focus on getting ready each and every time.”

On earning a point against New England:

“I wouldn’t say it’s two points lost. As I said before, New England is a good team, they haven’t lost in eight games before this game. To come out here with a point, it’s a good result. But we’re also disappointed in not getting the three points because playing at home, we always want to win.”

“I thought we were very good defensively. I thought we created a lot of opportunities going forward. Unfortunately for us, Petrović stood on his head, he made some great saves, a couple against Cava, one against Brian. But overall I think we executed our game plan very well and we kept another clean sheet so, in my opinion, you can’t lose if you don’t concede.”

On the keys to his good form:

“Controlling what I can control. Mentally, physically, emotionally, I can only do what I can do. I don’t try to be anything that I’m not. I try to help the players be who they are and be the best versions of themselves that they can be. I think collectively right now we’re all on the same page, as a defensive unit, as a team, as an 11 or 16 on game days, as a 20 in the locker room. We’re very connected right now and I think at the end of the day, we are executing on all fronts. We’re managing our training loads, we’re working together on the field, we’re spending time together off the field. For me, it’s controlling what I can control and being the best version of myself each and every day.”