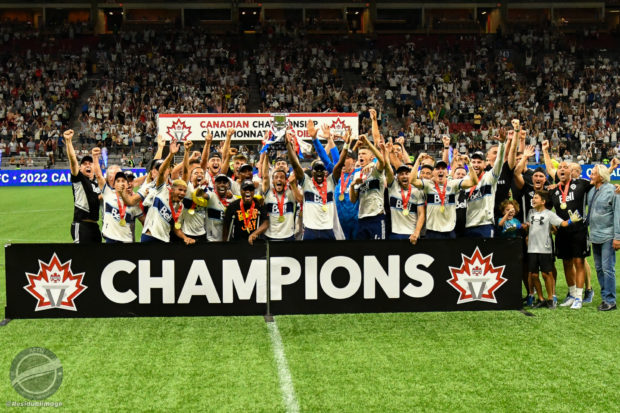 Vancouver Whitecaps lifted the Voyageurs Cup for only the second time in their history after a dramatic penalty shootout win over Toronto FC at an electric BC Place on Wednesday night.

It was a red hot atmosphere and temperature, and a night that will long live in the memory of the ‘Caps supporters that took it all in after the fanbase has been starved of success in the club’s MLS era. Brian White headed Vancouver on their way in the 19th minute and they held off a strong TFC side until the 75th minute when Lukas MacNaughton headed home the equaliser.

With no further scoring, the game headed to penalties and with Vancouver leading three to two after the first five kicks, Jonathan Osorio saw his effort saved by Cody Cropper in the ‘Caps goal. The team exchanged penalties before up stepped Tristan Blackmon to drill home the Whitecaps’ fifth and final spot kick, securing a long awaited victory and booking the team’s place in next year’s CONCACAF Champions League.

Unsurprisingly both teams went with strong starting line-ups. For Vancouver that meant seven changes to the team that lost at home to Chicago at the weekend. Toronto made one enforced change from their impressive 4-0 win over Charlotte at the weekend (Mark Anthony Kaye), starting all three of their recently acquired Italians. That felt a statement of intent from TFC to attack from the start and try to put away the game early as they did at the weekend.

Instead it was the Whitecaps who came out all guns blazing and Lucas Cavallini nearly fired the ball home just 34 seconds in, but Alex Bono came up with the leg save.

The ‘Caps kept pressing but couldn’t find the breakthrough and you wondered how much that might cost them as TFC started to get more into the match. But the breakthrough did come for Vancouver in the 19th minute and it came in some style.

After keeping the pressure on from an earlier attack Ryan Gauld sent in a beautiful first time delivery that White soared like an eagle at the back post to head home across goal and send the BC Place crowd into raptures.

Brian White over everyone *literally* 🚀

Gauldfather with the incredible cross in the 19th minute 👏

It was nothing the Whitecaps didn’t deserve for their aggressive play. How they would handle the lead was now the big question. As it turned out, fairly comfortably for the rest of the half.

Both teams had some opportunities. Gauld tested Bono in the final minute of the half with a long ranger and Ryan Raposo fired narrowly wide with an effort across goal, but the ‘Caps couldn’t add a second. Would they come to rue that?

The Whitecaps settled and both teams exchanged possession without really creating any clear cut chances.

TFC’s best look so far came on the hour mark, but Cropper came up with a diving save to turn away Lorenzo Insigne’s strike and Raposo was quickly on hand to pounce on the rebound and clear the danger.

As the minutes ticked down, and both teams rang the changes, TFC had to raise the tempo to find an equaliser.

They did just that in the 75th minute when MacNaughton rose unchallenged to head home a stunning outside of the foot cross from Federico Bernardeschi.

The game was now firmly in the balance but White nearly put the ‘Caps back ahead three minutes later, but he just couldn’t get a clean connection on a cross with his outstretched leg.

Vancouver came even closer to retaking the lead in the 80th minute when White ran onto a long through ball from Andres Cubas and played the ball inside to substitute Tosaint Ricketts, who chose placement over power, striking it well, but Bono pulled off a great diving save.

With neither team able to find the winner, the match headed straight to penalties. Vancouver were up first and Gauld, White, and Julian Gressel all converted their first three attempts, with Domenico Criscito and Jordan Perruzza scoring for the visitors.

Trailing three to two, up stepped Osorio for TFC’s third kick, but his effort crashed off the left post, with Cropper guessing the right way and looking like he’d have saved it if the ball had gone the other side of the post. Advantage Vancouver.

Cubas scored the next kick for the home side, with Bernardeschi firing home for the visitors, leaving Blackmon with the responsibility for winning the Voyageurs Cup for Vancouver. The centre back showed balls of steel to coolly fire a low one home down the middle, sparking wild celebrations on the pitch and in the stands.

The Whitecaps were full value for their victory, lifting their first Voyageurs Cup since 2015. For Vanni Sartini, it’s been a journey that started with this competition, taking over from Marc Dos Santos after last year’s quarter-final loss to Pacific, and has culminated just under a year later with winning his first silverware as a manager. Everyone connected with the club will be hoping it’s the first of more to come.

So one Italian manager > three Italian players?! For Wednesday night at least, it was.

“I was confident, but I was also a little bit pissed. Because I think if the first half finished 3-0 for us, nobody would say anything. Then, in the second half they pushed a little bit and we defended very well. They scored the goal because, again, they have top players, the only player who can make that cross is Bernadeschi in the league. I was a little bit on the edge, but I knew that the fans were going to help with their noise. Then in the shootout they pulled the ball for Osorio to hit the post, then we won, so I’m very happy.”

On winning the 2022 Voyageurs Cup:

“We worked a lot the entire season. We said from day one that the Canadian Championship was one of our important trophies. We didn’t do well in the last previous years. It means everything because you know, we are a very good team. So today we reminded everyone that when we are 100 per cent, we are a very good team. But we are not the team, who was painted or who was considered like ‘elite’. So winning a trophy for us is really important. On a personal note, it’s the first trophy that I win so, you know, I’m really, really happy.”

TFC did not come into the press conference room or speak with local media after the match.