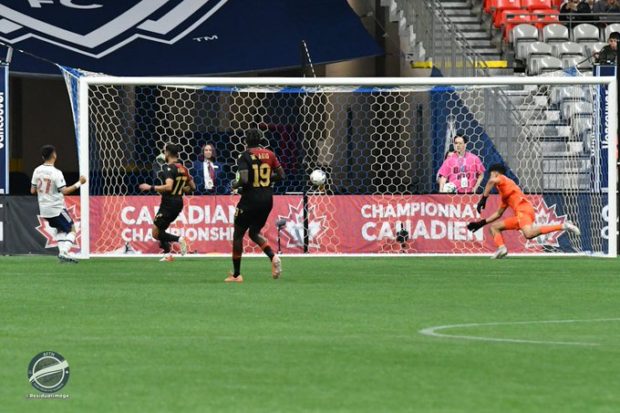 It wasn’t the return to BC Place that Valour FC head coach Phil Dos Santos would have wanted, but probably the one he expected. Nine months ago the then Vancouver Whitecaps assistant coach was in the dugout in Langford as the ‘Caps were knocked out of the Canadian Championship by Pacific FC. That defeat cost the Dos Santos brothers their jobs. On Wednesday night, Dos Santos was back in Vancouver, trying to be the one to cause upset against his friend Vanni Sartini.

Sartini was in no doubt about the importance of this match and what failure could mean. Uber Eats operators were also on standby. In the end, he didn’t have to worry as the Whitecaps got the job done with relative ease. It may have only been a 2-0 end result, with both goals coming in a three minute first half spell from Russell Teibert and Ryan Raposo, but the ‘Caps were seldom troubled by a Valour side that struggled to get things going in the first half, but regrouped and frustrated Vancouver in the second.

Sartini made six changes for this one from Sunday’s win over Toronto, going with a Canadian-heavy set of starters. And it was two of those Canadians who proved to be the difference makers on the night.

And it was the MLS side who made all the early running, but they had to wait until the 12th minute to have their first real look at goal, with Deiber Caicedo heading over a Lucas Cavallini cross.

Seven minutes later and they were ahead. Raposo had been Vancouver’s liveliest player and when his shot was saved by Rayane Yesli in the Valour goal, Teibert was on hand to fire home the rebound.

Skipper Russell Teibert scores his first #CanChamp goal to make it 1-0 for @WhitecapsFC over @ValourFootball!!

How does he celebrate?! Motions to keep going! These boys aren’t playing around tonight. #VWFC pic.twitter.com/xONrQdPf17

Vancouver were looking comfortable by this point and they became even more so in the 22nd minute when they doubled their lead.

Caicedo powered into the box and squared it to a wide open Raposo, who easily put stroked home the second.

Deiber Caicedo with the perfect pass to @RyanRaposo7 for his second #CanChamp goal! @WhitecapsFC up 2-0 over @ValourFootball in the preliminary round of the Canadian Championship. #VWFC pic.twitter.com/YmHixKIZKs

Raposo and Marcus Godinho had chances to add to the tally before the half was out, but Valour nearly pulled one back in first half stoppage time when a looping Sean Rea header was kept out by Cody Cropper.

The second half offered little of real note. Valour enjoyed a lot of possession, but much of it was outside the final third and Vancouver’s lead never really looked in any trouble.

The disappointing aspect for Vancouver will be the fact that they didn’t go on and add to their tally. They could have gone for the jugular and got some confidence boosting goals in the second half, but Valour didn’t have to deal with too much from what Sartini described as a “sleepy” performance.

But it’s the end result that matters and Vancouver have now finally beaten a CPL side in this competition. Can they do it again in the quarter-finals? A much stiffer test will surely await at Spruce Meadows in Calgary when they travel to take on Cavalry FC in two week’s time. Get through that and a semi-final tie against another CPL side in Pacific FC or York United awaits. The redemption tour has begun.

“I think we were relaxed, also we approached it with the right mindset to play a real game, to play on top of our game and I think we played a very good first half. I think the first half was a quality first half. Lot of chances, we showed that we were the higher league team and I was very happy. I think that we relaxed too much in the second half. I wanted to see more hunger from the players and to close the game because 2-0 is always an open game, because everything can happen… I think we relaxed too much and I wasn’t very happy with the performance in the second half, I think there wasn’t the intensity that we needed but we took care of business in the first half.”

On the upcoming schedule:

“I love it, to be honest. I like it. I like it so I can tinker the formation without you saying that I changed too much. We need to be very careful. I want to be again very, very, very, very clear. We’re going to play a San Jose, Dallas, Charlotte and then Cavalry. On the next four games, the most important game is the one against Cavalry. That’s clear and because it will give us the possibility to go into the semifinal. So we’ll have, of course, to juggle the 11 every time and try to play the best team on every game. I’m happy that Leo [Owusu] is back, Guti [Cristian Gutierrez] is back, Caio will start training full tomorrow then in the two weeks he will be able to play again. So we have players now and we can make rotation. And maybe there’s magic from immigration and Cubas is here next week. It’s going to be good because I have a lot of players now that can play.”

On the attitude heading into the match:

“I don’t think there was pressure within the group. I think that was more outside where people were saying ‘Oh Whitecaps this, Whitecaps that,’ At the end of the day everyone’s calm, cool, and composed. Training all week, not one person was thinking about last year, the year before. We knew that we had to come in and play our game. And if we did that, then we would advance. I think for 25 minutes today we did that, and that was good enough.”

On the win and home stretch:

“Yeah, we definitely could have got a couple more. No, but it’s good for the confidence, good for the team. No one’s overly excited like they weren’t expecting it. But yeah, it’s good for team morale, and it’s good for the team to get a couple of goals and more importantly to keep a clean sheet. Two games in a row where we haven’t conceded. At the end of the day we’re good at home. If you look at the statistics from when we came home from RSL and we’ve played here at BC Place, we’re a good team. I think a lot of teams realize that – I think we’re the best team at home since coming home from Salt Lake. So I think teams don’t take us lightly. They understand that coming to BC Place is going to be a challenge every time they come.”