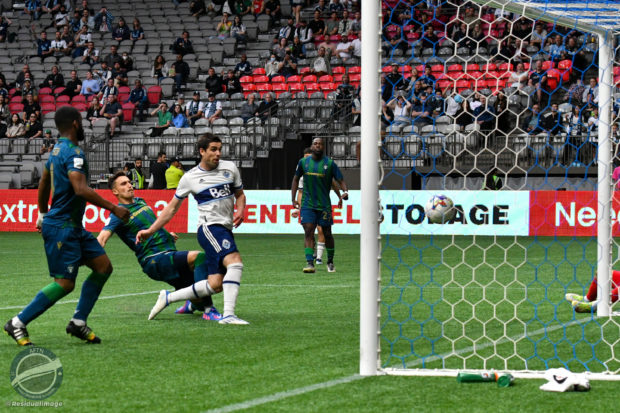 It wasn’t necessarily pretty or swashbuckling at times, but Vancouver Whitecaps put in a workmanlike performance at BC Place on Wednesday night to dispatch Canadian Premier League side York United 2-1 and book their place in next month’s Canadian Championship final against Toronto FC.

The scoreline doesn’t really do justice to how much the Whitecaps dominated the game, but in the end a Brian White brace was enough to get the MLS side over the line, despite getting a late surprise when Isaiah Johnson pulled one back for York.

Vanni Sartini made five changes from the side that beat Dallas at the weekend, and it was a very strong side he put out against their CPL opponents.

The Whitecaps dominated the play in the first half, with York struggling to have much penetration in the final third bar a few forays forward.

All the ‘Caps really had to show for their efforts through the first 25 minutes were an early Lucas Cavallini header straight into the arms of Niko Giantsopolous and a White header that went over.

The Whitecaps best chance to open the scoring came in the 29th minute when Cavallini’s pace and power saw him tear into the box but Giantsopolous came up with a good save to deny the Canadian international.

York started to come more into it as the half ran down, forcing four corners in one sequence but without forcing Cropper into a save and the teams headed in at the break scoreless.

York coach Martin Nash will have been the more pleased of the two gaffers and relatively happy with his team’s first half performance. No goals but he’d be fancying The Giant to come up big again on penalties if it got to that.

It wasn’t to be and Vancouver finally got their breakthrough eight minutes into the second half.

Ryan Gauld sent a lovely diagonal ball to his namesake Ryan Raposo, who chested it down and volleyed it first time, taking a deflection off Chrisnovic N’Sa and towards goal.

Giantsopolous did well to scoop the ball out from under his crossbar but it fell to White, who made no mistake from close range to finally put the Whitecaps 1-0 up.

GOAL! Brian White scores to give @WhitecapsFC the lead! #CanChamppic.twitter.com/Ov6y9Bf8hH

There was still a lot of time left for York to turn things around but they would have to pick their moments to attack for fear of giving up a killer second.

The Whitecaps then got their crucial second in the 73rd minute to give them a little bit of breathing space.

Gauld broke down left, centering the ball for White to volley home his, and Vancouver’s, second. Giantsopolous should have done better but it was a lovely finish from the Jersey boy.

GOAL! @WhitecapsFC have a second courtesy of Brian White.#CanChamp pic.twitter.com/LSaUWxZGTA

That looked game over for the CPL side but to their credit they kept going and pulled a goal back with six minutes to go when Johnston danced past Jake Nerwinski and finished past Cropper into the far corner to set up what could have been a nervy ending for the ‘Caps.

In the end they saw things out fairly comfortably to book a first Canadian Championship final appearance since 2018. Is a second Voyageurs Cup in the team’s future? Toronto FC now stand in their way, but Sartini feels that the home field advantage gives them a 51% edge right now. We’ll find out in five week’s time.

“I think he did very well, especially in the second half. Even in the first half he had a couple of chances to score. I hope that this is going to give him a boost of confidence with these two goals that he scored. The first one especially, is the typical Brian White goal, it’s this ugly goal, he’s there in the right space at the right moment. So I hope that it’s going to give him the confidence to be the Brian that we knew last year again, very soon.”

On hosting the Canadian Championship Final at BC Place:

“It means a lot. As I said before, I think that the final is going to be open to any result, but I think that we have 51 percent of possibility and Toronto 49 [percent], because we play at BC Place. If we were playing at BMO Field, it would have been the other way around. I hope that our fans will come and support us like they do every time. I think it’s going to be great to host the final, to play a final here. So it’s going to be good for sure.”

On starting with Gauld and Cavallini:

“It’s something that we’ve kind of been hoping for, to get all of us on the field at the same time. Like you said, it’s been pretty unlucky with injuries, COVID or whatever it may be that we haven’t all three been able to get out there and get the repetition of minutes in. I think there were moments where it looked like some things were going to come off, and some things did come off. I think with more and more game time, we can get on the practice field, and with real game situations, the chemistry will just start coming there and more goals will start flowing.”