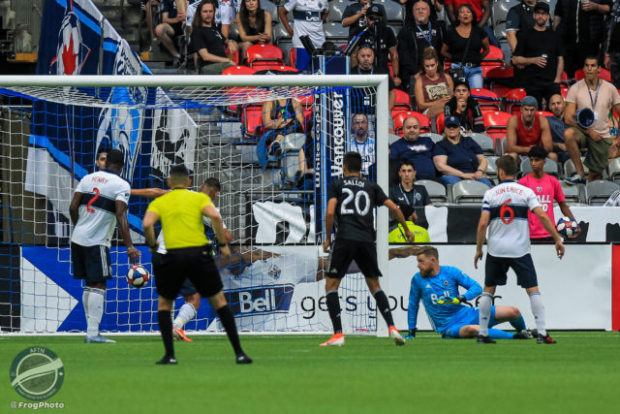 There was no magic in Vancouver Whitecaps’ return to BC Place in a 3-0 defeat to the visiting Sporting Kansas City on Saturday evening. And it feels like it’s going to take more than a spell or two to drag the team up the standings after their latest loss saw them sink to the bottom of the Western Conference, nine points adrift of the playoff places.

In addition to an own goal by Ali Adnan, Sporting got tallies from Felipe Gutiérrez and Gerso, while Tim Melia kept his sheets clean in the KC goal, making six saves on the night.

Sporting Kansas City may have had the majority of control for the opening minutes but it was Theo Bair, in his debut, who got the first shot on target, albeit one that didn’t trouble Melia.

After that the majority of the first half saw SKC dictating play with their first chance coming off a free kick where Graham Zusi curled a shot that forced Zac MacMath, getting the start for the rested Max Crepeau, to parry the ball into touch.

The visitors opened the scoring in the 24th minute when a shot from Gerso saw the ball deflect off Adnan for an own goal to give KC a deserved lead.

There was another opportunity for the ‘Caps to get on the board in the first when Bair’s shot from inside the box was deflected over the bar, as the young homegrown player continued to provide the only offensive spark for a flat looking Whitecaps.

The opening ten minutes of the second half saw the Caps with a trio of chances to pull even with Sporting.

A free kick from about 25 yards out by Inbeom Hwang forced Tim Melia into a sprawling save, followed up by Bair once again who was alone, about ten yards out, but couldn’t get his shot on target.

Those misses would prove fatal for Vancouver’s chances to get anything in this match as Felipe Gutierrez doubled SKC’s lead in the 56th minute with a sneaky shot from outside the box that beat MacMath at his near post. The goal stemmed for a poor kick out by the ‘Caps keeper, with KC pouncing to increase their advantage.

By this stage you already felt it was all over bar the shouting, and booing, for the ‘Caps.

There was a close call with less than 15 minutes to go in the match when Yordy Reyna’s free kick from outside the box deflected off the wall and hit the woodwork, but that was as close as Vancouver would come to troubling the KC goal

The visitors then put a fine cherry on top of their cake in stoppage time when father-to-be Gerso got the perfect pre birth present by firing a cutback from Krisztián Németh into an empty net from six yards out.

It was a comfortable win for KC, who are now starting to show some signs of a resurgence following a spate of injuries that threatened to derail their season. Back to back wins for Sporting sees them move up to 9th in the standings, four points back of the playoff places but with a game in hand.

But while KC are heading in one direction, the Whitecaps are firmly heading in the other. Their defeat, coupled with Colorado’s draw with Portland sends Vancouver to the bottom of the Western Conference, rooted nine points back of the red line and with very little on display to give any belief that they can close that gap.

They don’t have much time to regroup either, flying out early on Monday to Boston to take on an in-form New England Revolution side who are now unbeaten in eight matches, as Bruce Arena’s men continue to climb the table. 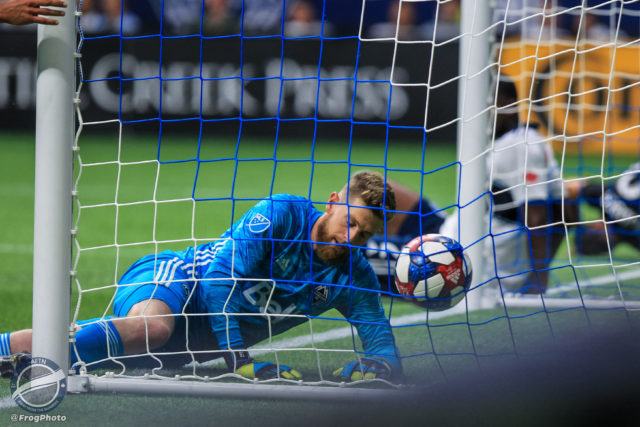 “At this stage right now, we’re a little bit fragile. We’re in a position that every time the opponent scores, it looks heavy. We need to have a different type of mental toughness and react in a better way. When that happens, it’s hard. I have to apologize to the fans for the first half. That’s where the game happened. It was very sloppy, lack of intensity, lack of willingness mentally, not in the game for a game that’s so important for us.”

On the chances in the second half:

“The second half, it became an exaggerated result. We had some good chances. Tim makes a good save, the other one hits the post. Ali gets in a good area in a dangerous play, Theo has a shot that comes very close. I think there we deserved a goal. Then when we don’t score, 2-0, and then the result got a little bit exaggerated. I think the first half was key to our performance today. We didn’t deserve to win due to our first half for sure.”

On how to spark the attack:

On challenging the team:

“Now, we have to think game-by-game. We have to think about what we want to look like. We still have the Canadian Championship to play for. We still have a lot to play for and I believe that inside. I’m challenging everybody in our locker room to show that we have that mental side that we can react to things. It’s not going to be a group that’s going to be blaming each other. It’s going to be a group that fights to grow to become a better team.”

On the decision to start Zac MacMath:

“The 15 games that we’ve had since LA. From LA until the end of August, we have the possibility of 15 games and we were looking at what’s the best time to rotate before Max gets a big stretch. This was the time for us in our cycle. It’s tough for a goalkeeper to play 15 games in two months. We don’t have to get anybody injured. Zac showed in other games that he can do the job. I trust Zac, he has the abilities to do well in this league.”

On how to start getting more clean sheets again:

“It’s tough, because the defence has done really well. It’s a lot of pressure. It’s tough, I don’t know. I don’t want to make any excuses for why or what’s going on. But when you’re playing in a team that’s not doing as well as we want to be doing, it’s really easy to point the finger. But as a club, we’re not doing well. I think it’s kind of harsh to just say that the defence as of late has been doing poorly; as a team we’ve been doing poorly, and that needs to change.”

On if this team is a playoff calibre team:

“Yes, with everybody on the same page.”

On how to right the ship going to New England:

“The same way we go into every single game, with the mentality to win.”

On his first MLS start:

“Lots of adrenaline, felt good, I think that it was unfortunate, not to get the lead but it’s a progress, we have a good group of players, good team and I think that as long as we believe in each other, the season will go well from here.”

On managing his size on the field:

“It’s been that way my whole life, every time that I touch someone, they usually fall so it is just something I need to adjust to, maybe pull up a little bit.”

“We just need to take it game by game, New England is a good opponent but I think that as long as we get together, get our heads straight, we can beat them.”

“I’m trying not to think about it too much because obviously I just played my first 90 minutes with the team, so I just want to focus on New England and help [the team] as much as I can, and once that game comes, I’ll take the time to enjoy it and have fun and play well.”

On being a part of the first team:

“It’s a completely different level, it demands a lot more, the guys are more serious it’s still a lot of fun but this is a job so we have to take it seriously as well so it’s just different for sure but I really like it.”

On Marc Dos Santos’ trust in him:

“It feels great, obviously when your coach is behind you, that’s the best feeling in the world so it felt good.”

“I always think it’s really difficult when you have to go away from home and sort of control the game. The fact that they bunkered in at home, doesn’t make for an easy game for sure, because it’s very easy to get a little overzealous and open yourself up for a counter. I thought there was two things, I thought one we were really good in possession, we didn’t lose the ball in critical areas of the field that found this unbalance and at the same time when we did go forward, we were really conscientious of defending from behind and if they won the ball, we were really quick to snuff a lot of things out and I think that was the difference in the game.”

On the early goal:

On controlling the match:

“I mean I would say for the full match, yes, I mean the fact that our possession was what it was, like I said, to be able to do that in somebody else’s place and to do it in the fashion that we did was, very mature on our part, on the players’ part and then the other is, like I said, and you said it, the early goal is a big thing when you’re in a situation like this.”

On getting above the ‘Caps in the standings:

“I think the most important thing for us is gaining three points, that’s the biggest thing, I tell the guys all the time, we worry about what everybody else is doing, we just have to focus on ourselves, you can sit at home and hope that everybody loses but that’s not reality. If we’re just taking care of our business, then we have a good shot.”

On the own goal:

“It helped a lot of course, when we are winning we play with more confidence and try to look for the second one.”

On the game plan:

“We know where we want to be and to be there we have to play every game to win, so doesn’t matter if we’re playing at home or away, you got to start the game, pass and try to score it as soon as we can.”

“Definitely, I think if we keep playing like this, I have no doubt in my mind that we’ll make it.”