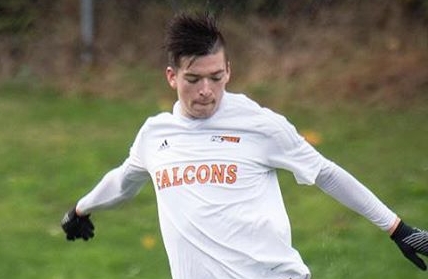 On Thursday Delta Blaze extended their incredible winning streak with their 8th consecutive win, against Westside FC in Division One League play. The 3-1 victory keeps their record perfect on the season and puts them within one win of the Title.

Their opponents are Rino’s Tigers, who have dropped back by five points in their pursuit for a repeat of last year’s Championship. Delta Blaze also have a game in hand over the Tigers but circumstances could turn this race around and the Championship could still be up for grabs. 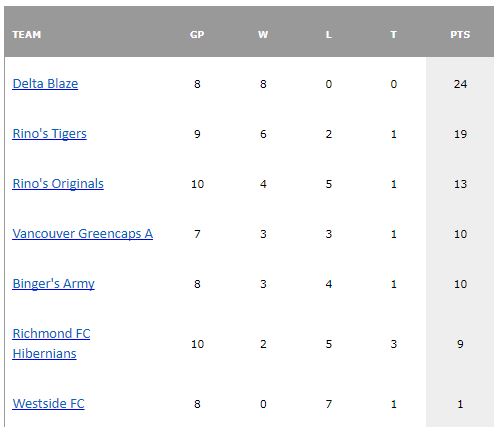 Richmond Olympics hosted Bombastic FC on Tuesday hoping to avenge their 2-1 loss from earlier in the season. They got off to a good start, attacking from the beginning of the game, and with only 10 minutes gone Kyle Kemp (pictured above) pushed forward from his defensive position to put Olympics up 1-0. Five minutes later Mike Reston scored putting Olympics up by two goals after only 15 minutes. Bombastic came back into the game, but struggled to find the net. Then with only five minutes left in the first half, Jesse Wills scored an amazing goal from the edge of the penalty area with a diving header past the stranded Bombastic goalkeeper.

The second half didn’t start well for Bombastic either, as Kemp and Ruston added goals to give Olympics a clear 5-0 lead. Still, Bombastic didn’t give up and Owen McSwiney gave them life on a fine header. Shortly after Mark Twohig made the score a little better and added Bombastic’s second. However, in the end it was Richmond who proved to be the stronger team on the night and a 5-2 victory was settlement enough.


The race for the Division Two Championship this year could go a number of different ways as the top four teams are separated by only one point. Vancouver Strikers hold first place with 19 points, the narrowest of leads, and their next opponent are the Richmond All Blacks with 18 points right behind them. United Nations face Bombastic and both have 18 points, so there could be some real moves going into the closing games of the season. Metropolitan FC could still move into contention with a win over Richmond Olympics. 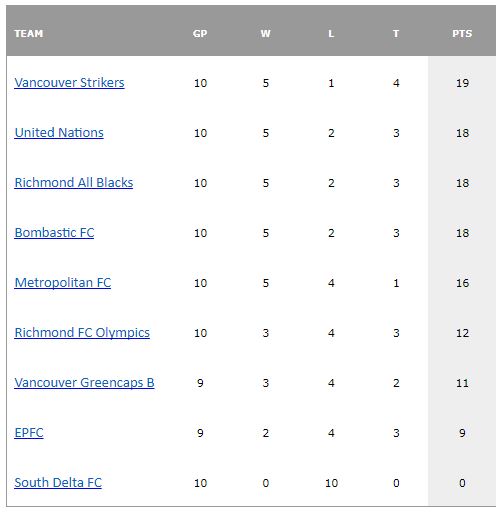