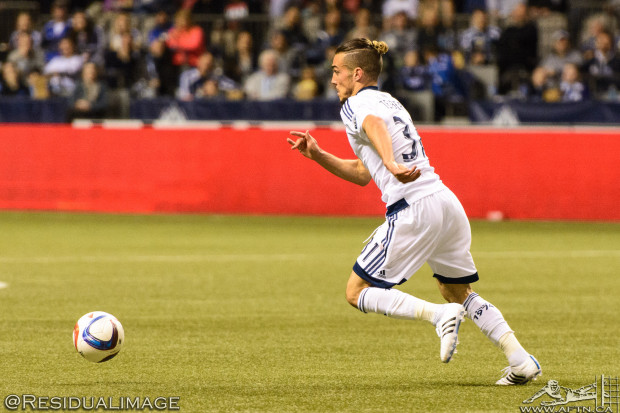 Vancouver Whitecaps may have lost Kendall Waston to Gold Cup duty this week, after his late call-up to the Costa Rican squad, but they at least welcome back another player, with Russell Teibert returning to the ‘Caps after Canada crashed out of the tournament with a whimper, not a bang.

Teibert headed off to join up with Canada after the Whitecaps 2-1 win at New York Red Bulls on June 20th. After missing the games against New England, Colorado and Kansas City, which he followed avidly from a far, Teibert is excited to be back with the ‘Caps and is raring to go.

“Absolutely,” Teibert enthused to reporters at training on Thursday. “I miss the boys. I miss the team. I miss the city of Vancouver. It’s become my home and it’s just nice to be back.”

The Whitecaps are getting a pretty fresh Teibert back in the squad. The 22-year-old didn’t start any of Canada’s Gold Cup games, coming on as a sub in all three matches for a combined total of just 49 minutes.

Benito Floro’s decision not to start Teibert raised ire in some quarters. It shouldn’t have been a surprise though, as Floro has only started the Whitecap twice in the past two years.

After some friction between the pair at the start of last year, it looked like the Spaniard had buried the hatchet after starting Teibert in the World Cup qualifier in Dominica at the start of June. He even scored, albeit just from a penalty, but they all count and it was his first international goal.

But then the Gold Cup came around and Teibert found himself back out of favour. Frustrating? I’m sure it was, but he wasn’t showing it back in Vancouver, instead focusing on the positives from his experience at the tournament.

“It’s a learning experience for me again,” Teibert said. “I walk out of that tournament with my head held high. Walking out confident because I did everything I could for my country.

“Whether it was in a starting position or whether it was coming off the bench, I wanted to play whatever role the coach asked me to play and I did, to the best of my ability.” 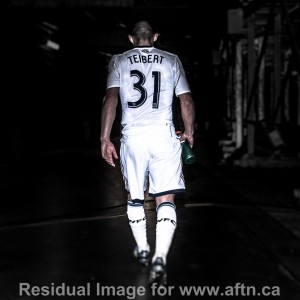 Canada’s loss is the Whitecaps gain and head coach Carl Robinson will now have Teibert available for this weekend’s crucial Cascadia Cup clash in Portland.

The young Canadian is unlikely to see the start. He admits he still needs to get back up to full match sharpness after having not played a full 90 minutes for a while, but expect him to feature at some stage during the game.

Robinson is delighted to have a relatively fresh Teibert back in his squad, although he wouldn’t be drawn on Floro’s decision not to use his player more. Well not too drawn!

“Rusty came on in three games, so I’m delighted he managed to get three more international caps under his belt,” was Robinson’s take. “I thought the game against Costa Rica, he came on and was lively.

“Each manager has his own decisions and dilemmas. Benito’s decision to not start Rusty was his decision. Rightfully or wrongly, that’s his decision. You’ll have to ask him about that.”

And despite the lack of gametime, Robinson feels that Teibert still has a very bright future ahead of him on the international stage. But for now, his prime concern is Teibert as a Whitecap.

“Do I think Rusty’s got a big future for Canada?,” Robinson asked. “Without a doubt. He’s got a big part to play for me here right now. He’ll be involved at the weekend.

“It’s great to have him back because he brings an energy about him and about the place. I’m delighted that he’s playing international football again because this time last year he wasn’t. He wasn’t even in the mix. Step by step. You can’t run before you can walk.”

Teibert has primarily played as a defensive midfielder under Robinson in his favoured 4-2-3-1 formation. Under Canada, with their one man DM role, Teibert has been playing a more attacking role and on the wing.

Confusing for the player or a chance for the Whitecaps to see one of their guys in a different position without having to do the experimenting themselves?

“I actually don’t mind it,” Robinson told us. “I want my players to learn to play in different positions. When Martin [Rennie] was manager here, Rusty played on the right side of midfield, even though he’s left footed, and he played some very, very good games.

“I wanted to try and play Rusty in a more central role because I think his attributes bring a lot to the table. The way he gets on the ball, the way he covers ground, the way he connects passes and he’s done fantastic for me in that role.

“Benito plays him on the right, like he’s played before, it’s great. Part of players development is being able to play in a number of positions and fortunately Rusty can. I even played him at left back today [in training], which is good!”

Some of Floro’s team selections and tactics may have been frustrating, but the entire Gold Cup campaign was a downright disappointment, as Canada once again crashed out of the Group Stage, winless and goalless for the second straight tournament.

Although Teibert feels that there were positives that could be taken from Canada’s performance, he acknowledged that work still needs to be done in certain areas and particularly in the scoring department.

But can they actually find the ability to do that? After the failure at the 2013 Gold Cup, surely no-one thought that another tournament with no goals was on the cards?

“It’s happened in the past,” Teibert said. “You go into a tournament with every expectation, with every possibility. Obviously you don’t want that to happen. You try and make a difference, do as much as you can. But at the end of the day, things happen the way they do and things happen for a reason.”

I’m sure we’re all eager to eventually find out just what that reason is and whether a truckload of broken mirrors was involved.

But for now, Teibert turns his full focus back on to the Whitecaps and he’s fired up to return for a Cascadian derby down in Portland.

And he’ll be facing a familiar face, and a good friend of his, in Will Johnson down there.

Johnson turned down the opportunity to join Canada’s Gold Cup squad as he continues his return from injury. Whether that will put him in Floro’s doghouse will remain to be seen, but all Teibert knows is that he can’t wait to get back to battling him on the pitch again this weekend.

“He made a decision not to go to the Gold Cup for personal reasons,” Teibert said of Johnson. “I can’t really speak too much about that because I don’t know the full story. It’s always nice to play against him and it’ll be a battle, not only between us but between both sides.”

After all the disappointments of the past few weeks, Teibert just can’t wait to get back into action with the ‘Caps again and they don’t come much bigger to return for than an away Cascadian derby.

“It’s a big game,” Teibert said. “A big game in a lot of different ways. Cascadia match. Playoff hunt already. Rivalry. Personally, playing against Will. Him coming back from injury. Our fans travelling down to Portland. It’s going to be an exciting match and I can’t wait to just be there.”