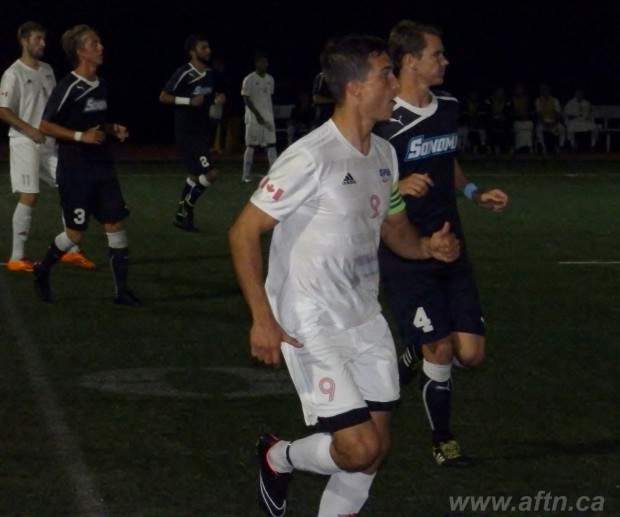 The exhibition games are over and the real business is now underway for the Simon Fraser University Clan as they look to land their first ever NCAA Division 2 Championship, despite coming close for the past two seasons.

Having won four straight Great Northwest Athletics Conference titles, the Clan have reached the Final Four for the last two years, but have fallen at the semi final hurdle on both occasions. This season, SFU are determined to make it third time’s the charm and head coach Alan Koch looks to have assembled a squad that already appears to be very fit for purpose.

“The goal is obviously to win the GNAC every year,” Koch told AFTN. “We are aware that every single team in the GNAC this year is significantly better than they were last year, so it’s going to be a much tougher challenge this year, which is good.

“I think that will prepare us to get into the National tournament, but the goal is to win it all. It always will be. We have to get better because we’ve never won it and hopefully this is the group we can get the job done with.”

After losing some key personnel including striker Carlo Basso and influential German midfielder Chris Bargholz, and looking somewhat out of sorts in the spring season games, Koch was quick to act to make some strong additions to compliment his key remaining squad members.

With 11 Freshmen on the 29 man roster, it appears to be a young and inexperienced depth pool at first glance, but the early signs show a lot of experience and skill on their young shoulders.

One of those Freshman is German striker Niko Schroettle, who was playing for TSV 1896 Rain in the Regionaliga and already looks a formidable presence up front. Another rookie to have impressed so far is speedy English winger Callum Powell, who comes to SFU from Northampton Town U18s. Swede Justus Hogback is another rookie striker who heads to the Clan from Swedish side Lidkoping FC, winning a Division Three Championship with them in 2013.

Calvin Opperman is a Junior midfielder who transferred to SFU from Cincinatti. The Kiwi has represented New Zealand at the U17 World Cup in Mexico, but from what we’ve seen so far, the newcomer to impress us the most is English centre half Callum Whittaker.

Whittaker transferred to SFU from NCAA D1’s University of San Diego and has played in the Chelsea, Ipswich Town and Southend United academies, winning a U18 league title with the latter.

“He’s a great player,” Koch told us about Whittaker. “He’s a feisty player, he’s a competitor, he’s a winner. The nice thing about Callum is that he can play in so many different positions. We can play him as a centreback, then move him to a central midfielder, he can also play as a full back too.

“The guy’s been there and done that. He’s come from some good academies in England then he had a lot of success when he was down at the University of San Diego before he transferred here. He’s not a Freshman by any means, he’s a Junior, but you can see he’s got some experience.”

SFU’s competitive season got underway on Thursday night with their first of three non-Conference matchups.

California side Sonoma State University Seawolves were first to make the long trip north to take on the Clan, with Hawaii Hilo Vulcans heading to Burnaby on Tuesday evening, before SFU wrap up those trio of games in California against Azusa Pacific Cougars next Saturday.

The Clan can pick what opponents they ideally want for these games, but instead of easing themselves gently into the season, Koch wanted some tough tests for his squad from the get-go, with one eye already on the postseason.

“You pick your non-Conference games and it’s important to play other good, in-region teams because that will help us when it comes to the seeding,” Koch told us. “Last year we were seeded fourth, I think rather harshly. We want to be the number one or number two seed so we can get the first round bye.

“So Sonoma, they’ve won the national championship before, they’ve traditionally always had a good team, so it’s good to play the other good teams so when they sit on the committee and decide who’s going to be seeded, that should get us some credibility.

“The other games, Hawaii Hilo are another good team, with a new coach. They’ve brought in a bunch of foreign players so that should be a tough game on Tuesday. Then we go down and play the PacWest champions in LA next week, Azusa Pacific. So our three non-Conference games will be tough, but hopefully we can get some positive results.”

And the Clan already have one under their belts with a comprehensive 3-0 victory over the 2002 National Champions Sonoma State on Thursday in front of a large crowd.

First half goals from Alexander Kleefeldt, Ryan Dhillon and Niko Schroettle did the damage, with Clan keeper Brandon Watson also saving a late first half penalty. SFU also had the luxury of missing a second half penalty of their own.

SFU looked in control throughout and could have added a couple more in the second half in what a very comfortable first outing, but despite the scoreline, Koch feels there is still a lot of room for improvement.

“The most important thing in a first game is to win,” he said. “It’s not really the performance and I don’t think we played very good football to be honest. I don’t think we knocked it around as well as we’d like to, but there were some good, promising signs where we connected very well, players were very fluid with their movements within out system, we looked dangerous on set pieces.

Hawaii are next up at home on Tuesday. You can find the SFU Clan’s schedule for the season HERE. Admission and parking is free, so try and get out and support the guys. You’ll see some entertaining football in the process.