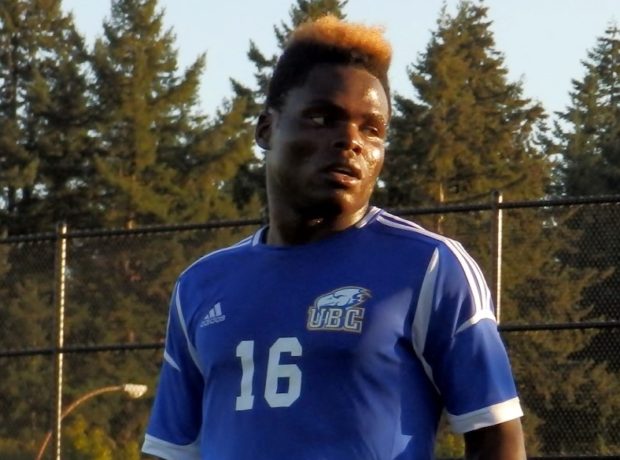 UBC Thunderbirds got their 2017 Canada West campaign off to a winning start on Friday night with a 1-0 win over lower mainland rivals the University of Fraser Valley Cascades at a packed Thunderbird Stadium.

It was a scoreline that belied the Thunderbirds dominance, as UBC outshot and outpossessed the visitors, but just couldn’t find the killer instinct in front of goal to add to Victory Shumbusho’s 27th minute header.

The Thunderbirds played some nice football in the first half, moving the ball about well and looking a real threat with their pace, especially up the left wing. And although they showed it in glimpses after the break, it was a little bit of a laboured performance at times in the second half.

But ultimately the main thing that mattered at the end of it all was kicking off the new campaign with all three points and in that regard, it was job done for UBC.

“Clean sheet, three points, we’ll take it, we’ll take it,” UBC head coach Mike Mosher told AFTN after the match. “Again, we know that we’re far from the finished product. I thought we were not far off in the first half, second half wasn’t the prettiest, but that said, we didn’t give up much scoring opportunities through it, so we move on to Saturday.”

You felt UBC were in control of the whole match, limiting Fraser Valley to just five shots, only two of them on target and most of them from long range. The Thunderbirds produced nine of their own at the other end and certainly had their chances to kill the match off late on, but couldn’t find another way past David Hicks, who had a strong showing in the visitor’s goal.

Possession was in their favour as well, but the Cascades did look a threat from set pieces in the second half, coming close with a couple of headers from a string of corners and free kicks.

Fraser Valley’s best chance came in the 38th minute, however, when Jun Won Choi went down in the box and the referee pointed to the spot. Brady Weir stepped up but Chad Bush produced a fantastic sprawling save to deny the Cascades defender, showing once again how important he is to this Thunderbirds side.

“It was disappointing to see them get the penalty,” Mosher mused. “Really, they hadn’t had much at all to that point, but Chad was huge coming up with that save and that’s the difference on the day.”

That and Shumbusho’s first half header off a sweet, inswinging Patrick Izett free kick, which proved to be the winner.

It was a dream start in the college ranks for Shumbusho, who moves to UBC this year after spending last season with Vancouver Residency. The rookie is expected to lead the line for the Thunderbirds this season, so getting off the mark in the first game will ease some of the pressure that may be on his shoulders.

“It was an amazing moment scoring that goal,” Shumbuso said after the match. “As strikers we live on the goals that we score. Izett has a great foot. I just had to hold my run in, get unattached, find the ball, and put it in the back of the net.”

Moments like that is exactly why Mosher moved to bring in the 19-year-old, and he was delighted to see him open his account.

“He’s certainly got quality,” Mosher said of Shumbusho. “What I love about Vic is his work ethic. His work rate is terrific. Making those kind of unselfish runs and effort up top. Hopefully that’s going to be contagious within the group.

“I always love to have strikers willing to go and put a shift in up top and Vic’s done that and it’s great to see him open up his account in his first official Canada West game.”

The delivery from Izett for the goal was also outstanding. The former Residency player is better known for his performances up front, but he played a far deeper role against Fraser Valley, playing defensive midfield and right back at time during the match. Another rookie, Izett is another big part of the UBC make up for this season to come.

“We were in a pinch with some injuries, so we dropped Patty in there today,” Mosher revealed. “He’s got a lot of quality on the ball, which I like in an outside back. He’s got a great range of passing, so he’s done a good job for us today and he’s whipped in a great ball for the winning goal too.”

Another player to impress for the Thunderbirds was midfielder Mackenzie Cole. The second year midfielder was all over the pitch and put in a fantastic shift, which didn’t go unnoticed by his coach.

“Mac’s got a good engine, he’s got good quality,” Mosher said. “He’s an intelligent player. I think that he can be a really good player in this league.”

There’s certainly no rest for UBC as they head back into action at Thunderbird Stadium on Saturday night against Trinity Western. The Spartans got their own Canada West off to a strong start with a 5-1 thumping of the University of Victoria Vikes on Friday night, thanks to a Leighton Johnson hat-trick.