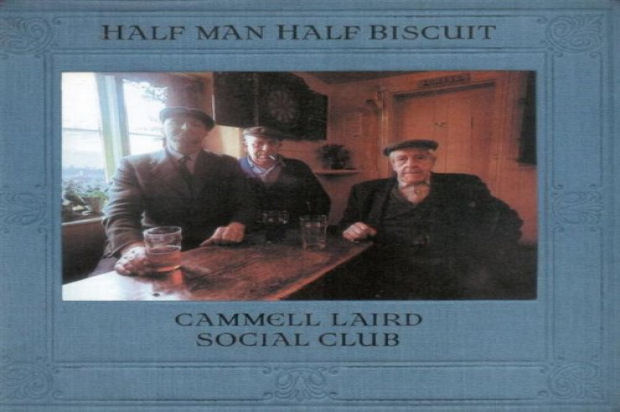 As I’ve said countless times before, football and music have always gone hand in hand here at AFTN, with our companion fanzine (“Ultracore”) and website (“Broken Down Halo”).

Now, obviously, some of these are dreadful! So we thought we’d start a new section to bring some of our favourite ones that aren’t to a wider audience!

We’ll kick the feature off with a band that will undoubtedly be included several times over the coming months. Birkenhead’s finest – Half Man Half Biscuit.

Now there are so many songs we could have picked to kick off the feature, but it had to be one by them, and “The Referee’s Alphabet” is one of our all-time faves.

For those that don’t know of HMHB, they are a cult, four piece band from Merseyside, England who have been around since 1984 and are still going strong. A lot of their songs are about football, mention it in passing or throw in some classic football phrases such as “Mathematically Safe”.

“The Referee’s Alphabet” is the sixth track on their ninth studio album, “Cammell Laird Social Club”, which was released in 2002.

Keeping with the football theme, Cammell Laird FC are a non-league football club from Birkenhead in Merseyside who currently play in the Evo-Stik League Northern Premier – First Division North.

We’ve followed their fortunes for a while (although Cammell Laird are also a company that owned the big shipyard there). And yes, there is actually a social club and one day we plan to take in a game there and have a drink in the club.

Apart from the clever lyrics, one of the things I love about this song is the fact that it’s still as relevant to football, and the modern day footballer, as it was ten years ago. And it sadly probably still we be ten years further down the line! It just captures what happens in a normal 90 minutes perfectly.

So here’s a fun video of the song, and the lyrics are printed in full underneath for you to sing along.

Even better, leave your own suggestions for “The Referee’s Alphabet” in the comments section below.

The A is for my authority, which many players seem to question, thinking they’re somehow going to make me change my mind.

B is for babies, which a lot of managers cry like after a decision has not gone their way.

C is for the continual criticism I receive from the touchline. Get back in your technical area.

D is for the dunderheads who seem to think we have a conspiracy against their particular team.

E is for the eerie silence which echoes around the ground when I’ve booked a home team’s player and it’s obvious to everyone that he deserved it.

F is the farce into which most games would descend if we weren’t there.

The G is for the gnarled face of someone who’s on £90,000 a week and reckoned he should have had a throw in.

H is for handball, which has to be intentional, and very rarely is. If only people would study the rules more.

I is for innocence, pleaded by many a doe-eyed defender after they’ve just scythed down that tricky winger.

J is for ju-jitsu, which I quite intend to display given a dark alley and some of the narky blerts I’ve encountered.

K is for the kissing of the badge. How ridiculous that looks 6 months later when they’re at another club?

L is for lip reading, at which you don’t have to be an expert to see how odious some people are.

M is for the mistakes we sometimes make. Surely a bit of controversy is part of the game’s appeal?

The N. The N is for the numbskull who, during the Boxing Day game, asks me what else I got for Christmas besides my whistle? “An afternoon with your wife mate”.

The O is for offside, which many forwards tell me they simply could not have been.

The P is for the penalty shootout. Great drama and no pressure on me.

The Q is the quiet word which I sometimes need to have with some of the more fiery participants. I usually choose the word ‘pleat’.

R is for running backwards. A difficult skill which the pundits never seem to appreciate.

Sorry I got all that wrong. The S again.

The S is the suggestion that I should show a card to an opponent, by a player who’s been awarded a free kick. He himself is more in danger of getting one for that.

T is for the 21 man brawl. Which is basically an embarrassing scene of pushing and shoving.

U is for the umpire, which I sometimes wish I’d been instead. You never hear a cricket crowd chanting “who’s the bastard in the hat?”.

The V is for vitriol, vilification, vendetta and volley of verbal abuse.

Some good bird noises there Paul.

W is for Walter Pidgeon, whose Mr. Gruffydd in “How Green Was My Valley” I may have started to sound like during this song. “Where was the light I thought to see in your eye?”. He says that to a young Huw, played by Roddy McDowall.

The X represents the sarcastic kiss planted on my forehead by a swarthy Portuguese centre half whom I’ve just dismissed.

The Y is for Yate, the kind of town that referees come from.

Well the Z could be for Zidane, Zico, Zola, Zubizarreta, Zoff. Even Zondervan. But is in fact for the zest with which we approach our work. Without this zest for the game, we wouldn’t become refs. And without refs, well – zero.

Had a caravan there. Static. Naturally.

Wouldn’t it be fun. If they gave the ref a gun.

{*** If you’re a fan of HMHB, then check out this excellent site for all your HMHB lyrics! ***}
Tags: TIMEWASTING, Sing When You're Winning, Football songs, music, Half Man Half Biscuit