Football is a drug to many. I certainly include myself in that. It can be detrimental to your health and wellbeing at times, but you just can’t live without it. Except now we have to.

This week’s near global football shutdown due to the growing spread of Covid-19 will be something of a cold turkey for a lot of people. No live games to go to or watch on TV. No new highlights shows. Nothing to read about, nothing to write about. You might even have to spend time with your family. It’s dire. The absolute correct decision, but tough none the less.

But fret not, for AFTN exists for times like this. If you want some football related entertainment, we’ll still have you covered here on the site and on the podcast. If anyone can fill pages and airtime when there’s no new football news to talk about, it’s us (I direct you to our two hour plus offseason radio shows)! We want to help put a smile on your face in these worrying times.

There may be no games to grab your attention, but there certainly is a wealth of football related films, television shows, and documentaries to fill that void, especially if you are unfortunate enough to find yourself quarantined with the virus or are just wanting to self isolate.

Regular readers of the site, and those that know me personally, will know that I’m something of a collector, and over the years I’ve built up a collection of the above. Some are well known, some are obscure, some are just downright strange, but this seems like the perfect time to share some of my favourites with you to check out over the coming days and weeks in our new section Sitting Round At Home.

So let’s kick things off with a look at three of my favourites fictional football films. I’ve gone for an eclectic mix – a film based loosely on true events, a somewhat obscure and admittedly hard to find foreign film, and of course with this being Football Violence Awareness Month, a film about football hooligans.

All come highly recommended for you to check out if you haven’t before or to watch again if you have. I think I’ll dig them out again myself this weekend. We’ll be back next time, with a look at three of my favourite football documentaries. 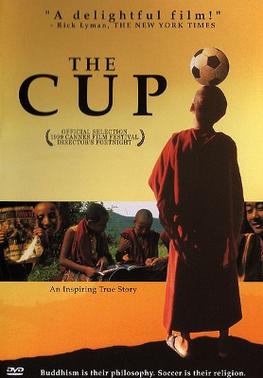 Now you probably won’t have expected us to kick off with a 1999 Bhutanese film in the Tibetan language subtitled into English, but here we are as I’ve gone alphabetically!

“The Cup” is a beautiful, heart warming 93-minute film that I first saw at a film festival and immediately became enchanted with it.

It’s 1998 in the film and World Cup fever has gripped the globe (a much better fever to do so than what we have now). That includes Tibet and most of the inhabitants of a remote monastery in the Himalayas. Except those that are in charge of the monastery aren’t so keen.

The film revolves around two young football obsessed monks. Brazil’s Ronaldo is their favourite player because he has a shaved head like them and they will do anything to watch him on TV in the quarter-finals, semi-finals, and final of the tournament in France. All of which leads to plans, scrapes, setbacks, and all sorts of wonderfulness. And it’s based on true events.

It’s just such an unusual film and was the first film from Bhutan to get sold worldwide. In a current world that seems to be going to shit, this is just the perfect charming comedy escape for you.

I only have this as a VHS video, but there is a DVD out for it, which I really should pick up, and you can also buy or rent the film on You Tube. In the meantime, here’s a trailer for it. 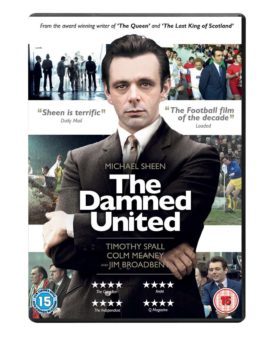 Released in 2009, this is the most well known movie on today’s list and it’s not without its controversies.

With a running time of 98 minutes, the film is an adaptation of David Peace’s bestseller “The Damned Utd”, a mostly fictional account of Brian Clough’s tumultuous 44 days in charge of Leeds United in 1974.

For those that don’t know the story of what happened at Elland Road in that period, I won’t go into any details so as not to spoil the movie, but let’s just say it was not the highlight of Clough’s distinguished managerial career. It did feature a match I often rewatch on You Tube though – the explosive 1974 Charity Shield clash between Leeds and Liverpool. That game is a thing of beauty!

The film also focuses on his pre Leeds success, coming through the management ranks with the likes of Derby County, and his post Leeds successes with Nottingham Forest.

His spell at Leeds is the catalyst for the film though, but much of what is portrayed is the author’s fictional account. As such, it has been disowned by the Clough family, including his son Nigel, and many of the players portrayed in the film across the clubs. There were even lawsuits filed.

They’re all keen to stress that this was not how things really played out, yet despite that, this film is simply fantastic to watch and you really don’t care that it’s mostly dramatised proceedings. It just captures you along the way and as a film in its own right, it great entertainment.

Michael Sheen is a fantastic and versatile character actor and his portrayal of Clough in the film is even acknowledged by its detractors as being spot on and a tremendous performance. There will be many that maybe know the name of Clough but have never seen him, and many that don’t know him at all, but if you check out some of his interviews on You Tube, you’ll see what a great portrayal Sheen gives.

Timothy Spall is also excellent as Clough’s right hand man Peter Taylor, a relationship that was so close then soured, and was really the perfect/imperfect football marriage.

If you want a Whitecaps connection to the movie, NASL legend King Kevin Hector spent 14 years at Derby County (12 before Vancouver and two after), including the period featured in the film. He isn’t featured by name in the movie, but would have been one of the squad members.

I spoke to Hector about his time at Derby, having Brian Clough as his boss, and The Damned United in Episode 357 of the AFTN Soccer Show, amongst all the Whitecaps chat.

“Knowing Brian, it was just a film to sell it,” Hector told us about the movie. “It was good and the person that did Brian Clough was good in the film, but it was a lot of false things in it.”

“Fun” fact. When the film was released, as with many movies, there were some promotional items made for it and I’m the proud owner of a special Damned United referee’s whistle!

The trailer for the movie is below. It’s often shown on a number of the streaming services, but I’m really not sure what ones it’s on just now (if anyone does know, give me a shout in the comments). You can also buy it on Amazon and on You Tube. 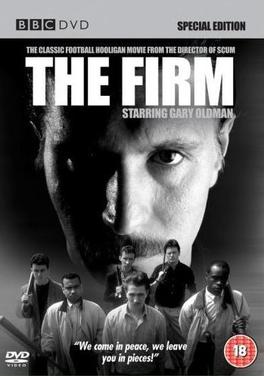 There’s been a lot of films made about football hooligans over the years, and a lot of them are pretty crap. The film that they all have to live up to though is one of the originals, and, for me, still the best film about football violence out there – The Firm.

Not to be confused with the Tom Cruise lawyer movie (which makes it really hard to search for this actual one anywhere), this is a 1989 film made for television by the BBC about a group of English football hooligans, the Inter City Crew, as they fight their rivals at home but who want to unite and build a national firm to travel to follow England in Holland.

The ICC are based on West Ham’s ICF and are led by Bexy, played superbly in the film by one of my all time favourite actors, Gary Oldman, in what I feel is one of the best performances of his career as he portrays both sides of the character – the day to day professional family man and the weekend football psychopath.

Coming in at 68 minutes, this film is violent and pretty graphic at times, and may be too much for some, so let’s get that warning out of the way. This isn’t a Hollywood staged Green Street affair. It really is a masterpiece of the genre. It’s intense social realism. There’s violence, there’s racism, and there’s uncomfortableness for the viewer. It’s rated 18 in the UK (II guess R here) for a reason.

There’s also no musical score to the movie that just adds to that gritty feel and it captures the vibe around football in the UK and disenfranchised youth in the country at that time very well.

I remember watching the film when it was first shown and being blown away by it, and it’s a movie I can go back to time and again and still enjoy. A lot of the credit for that is down to the acting, but director Allan Clarke also deserves a lot of praise. Clarke is responsible for three of my all-time favourites films – Scum, Made In Britain, and The Firm. He died of lung cancer the year after The Firm came out aged just 54. I’d have loved to have seen what else he came out with.

It’s a testament to the film that you can watch it 30 years later and, haircuts and clothes aside, it still feels fresh. Or at least I feel it does, you may disagree.

The film was loosely remade in 2009. The name was the same, the characters were there, but it was set earlier albeit with a similar plot. It’s an okay movie, but not a patch on the original.

You can actually watch the film in full for free on You Tube (embedded below), but it’s also worth checking out the DVD Special Edition with extended previously censored scenes.