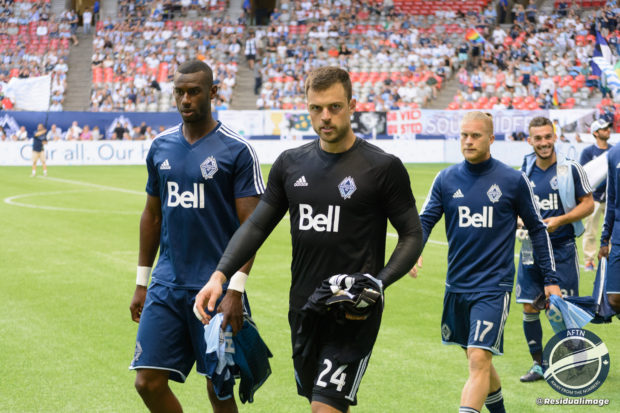 With all respect to the other goalkeepers that have been on Vancouver Whitecaps MLS squad since the summer of 2013, there hasn’t really been a challenge to David Ousted for the starting keeper’s jersey.

From August 2013 to October 2016 Ousted made 116 consecutive MLS appearances for the ‘Caps before sitting out a trip to San Jose to give Paolo Tornaghi a chance to put himself in the shop window for any potential suitors. He soon got his spot back for the last match of the season and the Cascadia Cup winning triumph against Portland.

But this season has been different. For the first time as a Whitecap, Ousted has some real competition to be the club’s number one in the shape of Kiwi ‘keeper Stefan Marinovic.

Marinovic has already made two starts in MLS since signing. Expect more to come very soon. He’s certainly up for the tough task of taking the starting jersey off the Dane and that kind of battle is the exact reason the New Zealand number one decided to make the move to MLS this summer.

“Well I’m now 25 and I just felt my career needed a little bit of a challenge,” Marinovic told AFTN. “I was very comfortable at my old club. Easily number one. I would have played again this year, another full season, but I needed a challenge and fighting for a spot with David, that’s a big challenge. I need that.”

As rumours swirl around what Ousted’s future may be as he heads into an option year, the basic fact of the matter is that for a goalkeeper in MLS, the Dane is in the higher echelon of salaries for the position. His option will be higher still. Is that a price Vancouver’s front office will be prepared to pay, especially with very capable replacements waiting in the wings?

And as spectacular and crucial as a number of Ousted’s saves have been over the years, and you have to look no further than three big stops in Saturday’s win over Real Salt Lake, he’s liable to make the odd howler or two, and again we point you to the weekend and that first RSL goal. Which goalkeeper isn’t though?

Ousted has undeniably single-handedly earned the ‘Caps a multitude of points in recent seasons, but for the first time, his position is not untouchable. Getting that jersey off him though is a whole other matter, and no matter what Marinovic may bring to the table in terms of composure and his ability to get across a goal to make a save, the New Zealand number one knows he has a battle on his hands to get it, but he hasn’t travelled to the other side of the world to play second fiddle or to just ride the pine and pick up a pay check.

“It’s tough,” Marinovic readily admits. “Obviously no keeper wants to sit on the bench. I’m sure Spenny [Richey] and Sean [Melvin] would love to be in my shoes sitting behind David and have a chance and maybe an opportunity to play.

“You definitely can’t show any type of bad feelings or I don’t like the position that I’m in. You just have to show that I’m here to play, I’ll put my hand up, and I’ll do that in training every week. You just have to do that week in and week out. It’s mentally tough, but like I said I’ve done it before and it’s worked out for me.”

Marinovic has spent the past eight seasons playing in the third and four tier leagues in Germany after moving there as a 17-year-old straight out of school. He began his professional career with SV Wehen Wiesbaden in 2009, before stints with FC Ismaning and TSV 1860 Munich II.

He’s spent the past three seasons with Spielvereinigung Unterhaching, establishing himself as the starting goalkeeper and helping to guide the club to a Regionaliga Bayern championship in 2016-17.

Coming out of the Wynton Rufer Soccer School of Excellence, an Auckland school established to provide trials for footballers in Germany with Hamburger SV and Werder Bremen, Marinovic caught the eye early on, and his decision to up roots and move to Europe was an easy one for him.

“Germany has produced, and still does produce, very good keepers, world class keepers,” Marinovic told us. “You’ve got the odd one from Spain, here and there from Italy, blah, blah, blah, but I felt Germany consistently produced good keepers.

“So for me as a 17-year-old, I had the height and I could catch the ball and had a little bit of raw talent, I felt it would be best served in a German environment under German goalkeeper trainers.” But signing a goalkeeper from the fourth tier of German football raised a few eyebrows here, especially in terms of coming in to challenge a quality keeper, and fan favourite right away for the starting position. Many saw that Marinovic was playing at a level three steps below the top flight and immediately thought it’s not a good standard of play, but third and fourth tier football in Germany is at a high level. It’s not on a par with it’s equivalent here in North America. If you’re not good, you simply won’t succeed there.

“I can definitely understand the trepidation a little bit of a keeper coming from that level,” Marinovic is honest enough to admit. “Fourth league, I can’t compare because I haven’t seen anything here. Half the teams, they’re second Bundesliga teams and stuff like that, with academy players who are up and coming first or second league players.

“So you have those and we, for example, were a team filled with ex second league players and myself as an international. We dominated the league last year and the idea was to go third league this year and play a good season there and then maybe jump up into the second league.

“It was kind of a project. I liked the idea at the time, and that’s why I joined on, but I just felt I need something more. I needed to push myself more. I can understand the people that have a little bit of trepidation but I think I have proved multiple times, at least with the national team and those big games that we had, those Cup games, that I can deal well with pressure situations and I can adapt very quickly to those and perform really well.”

Ultimately, the fact is that Marinovic was playing week in and week out, a position many back ups throughout MLS, and other leagues, would kill to be in. Factor in the experience Marinovic has had in recent years with the New Zealand national team, and you’re not just looking at some foreign keeper joining MLS from a lowly European league.

Marinovic has played at the 2011 U20 World Cup in Columbia and had kept Portland Timbers starting keeper Jake Gleeson out of the senior New Zealand team for the last 19 matches before his recent injury.

That experience, and the talent he has shown, put Marinovic on the Whitecaps radar, and they acted quickly to make sure the ‘keeper’s next stop was Vancouver.

“He’s at a really good age,” Whitecaps goalkeeping coach Stewart Kerr told AFTN. “He’s had a lot of experience for a goalkeeper and also he’s a very calm personality. Very calm in the goal. For a young age, he’s played a lot of games, he’s played in international games, he’s played in Germany. We know the level’s not been Premiership level and stuff like that, but any league in Germany is very, very difficult and you have to be structured to survive in it.

“It was a no-brainer move for us to get him in. There were a lot of teams after him, so we had to make a move. People obviously read things in to it, but for us, he’s a goalkeeper that we look at and we think he’s going to be something special in the future.” 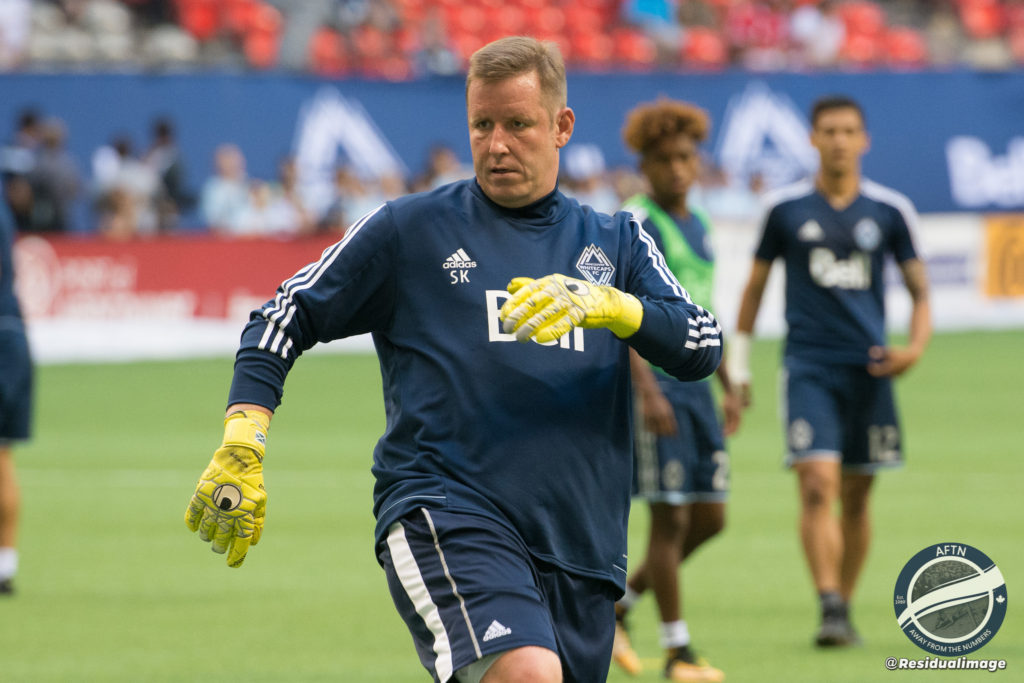 Calm is certainly a good word to describe the Kiwi. Relaxed and laid back are some others. Marinovic cuts a very assured figure on the pitch. He’s vocal, he’s funny, and he believes in his abilities. Not a lot seems to faze him, and especially not making the move from fourth tier football in Germany to the top flight in North America.

“I don’t have any qualms about playing in MLS.” Marinovic told us. “I’m not afraid. Football’s football. You play every week. There’s not much else to it really.”

We’ve seen that mentality on the pitch in his two starts to date, a 1-0 loss in New England in July and the 2-1 triumph last month in Orlando. He came up with six saves over those two matches, looked impressive, and a real challenger for Ousted’s number one spot.

Getting his feet wet early in his new environment was obviously the Whitecaps plan, and as delighted as Marinovic was to get his Vancouver debut, it was just another day at the office for him.

“I don’t see it a problem about getting it out of the way early, debut or not” Marinovic told us. “Debuts are always special, especially in a new league, but I see every game similar.

“If I was to see one game more important than the other, like playing against the Solomons [in a World Cup qualifier] is less important than playing in MLS, and vice versa, then I wouldn’t probably be as composed as I am on the pitch as what I hope and think I am. It’s important I keep my feet on the ground and always just play.”

With little room for error now for Ousted, and some interesting contract talk likely ahead, the battle for the number one jersey is sure to bring the best out of both goalkeepers and that can only help the Whitecaps massively at this crunch time of the season.